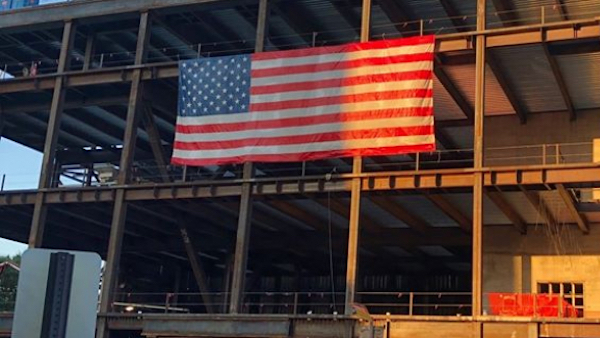 Construction sites commonly have an American Flag flying from them; it’s considered “good luck.”  But Virginia ordered a flag removed from a site in Richmond, just in time for the 4th of July. The company, Gilbane Building Company, allowed it, but somebody complained and the state made them take it down. They were not happy about it. Virginia ordered American flag removed 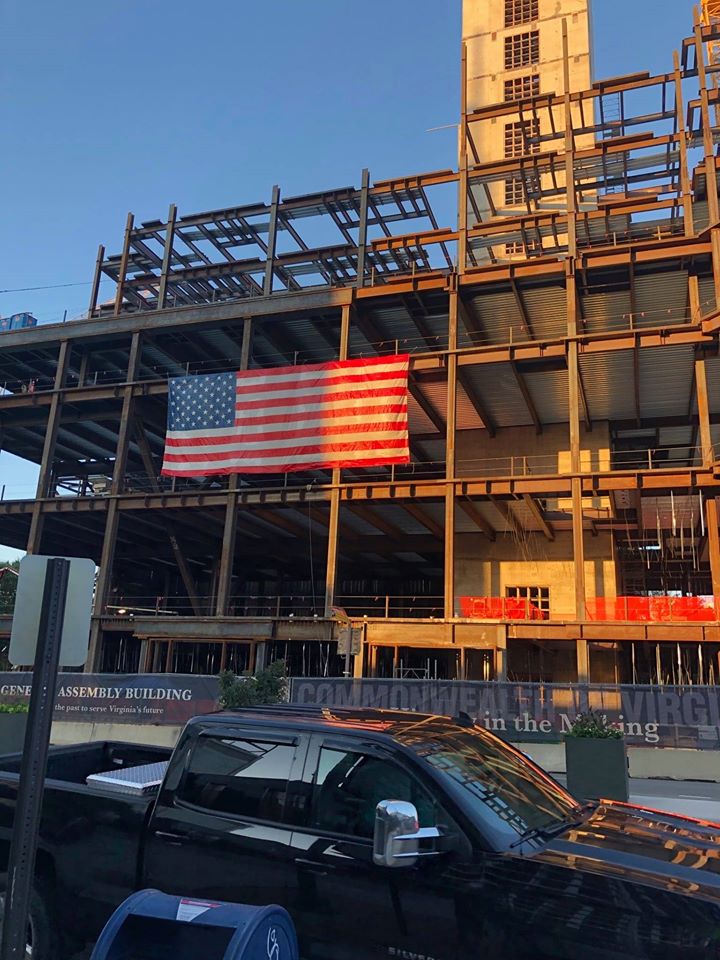 Virginia ordered flag taken down because of  “safety?”

“Over the past month we’ve seen buildings and structures around Capitol Square vandalized and flags, dumpsters, a bus and other items set ablaze during demonstrations around the city. When we saw the flag, we were concerned that it could become a target so we told the contractor to remove it.” Dena Potter, spokeswoman for the Department of General Services

The state of Virginia ordered- er, ‘decided’ the flag was too big and “reachable” by protesters. They claimed to not have a problem with a flag on a crane, as is normal for contractors across the nation.

“The move infuriated a subcontractor, whose fireproofing company used tarps to make the supersized Old Glory – about as tall as a full story on the building, part of a $300 million project that also includes a parking garage.”

“I usually don’t do this and sorry ahead of time Mom but the straw just broke the camels back! This is the flag that our company made out of tarps we use on buildings. We thought it would be a good idea to hang it, which we did this morning at the new General assembly job, downtown Richmond. Early on it got great reviews by all, and thank you to the GC for allowing us to do it…

BUT the GC got a call and we now have to remove it. It seems the “State” deems it a target this weekend for protestors. Since when is this flag, on this weekend, IN THIS COUNTRY, a Target!!

Let me guess, if I had a black lives matter flag it would be “ok”!? “F” you & your feelings. Look, Mr. Governor , Mr. Mayor, or whoever made the call, stop letting the inmates run the assylum! This goes for politians,”that work for us”, on both sides of the aisle! Grow a pair, and stop thinking everything we have or had in this once great state is offensive.

The American Flag is a symbol of Freedom! Many men and women died to maintain this freedom, many more fought and still fight to keep this freedom, and you make us remove it?? I’m all for the freedoms and liberty’s we have in this country, Protest, sure. Take a knee during the national anthem, whatever floats your boat. Marry who you want, absolutely! That’s what this flag represents! It’s bullshit that you made us take it down, but don’t forget, your actions have consequences too! You will now see this flag hanging at the Lake and I promise you it will NOT be removed! Happy Birthday America!”

Good for you, Eric Winston for being a strong American.