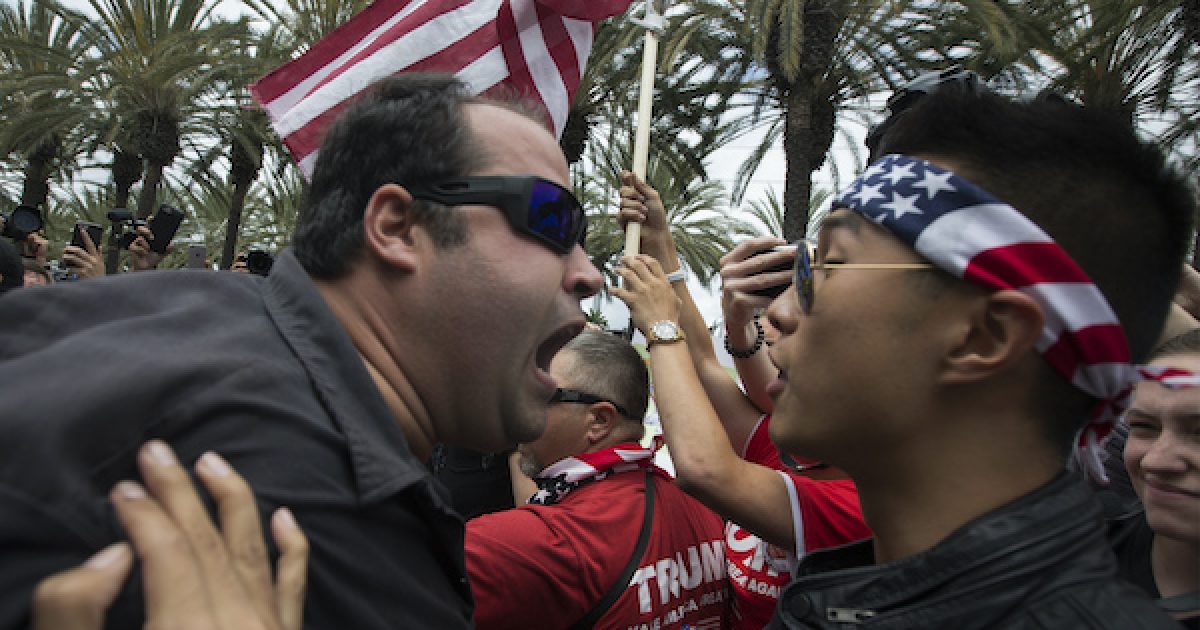 A new Rasmussen survey says voters“see a bigger threat of violence from President Trump’s opponents than from his supporters if Democrats succeed in removing him from office,  a prospect that may be diminishing on live television as the House hearings continue. Violence Trump opponents.
The Rasmussen survey found 53 percent of likely voters are concerned that if Trump is impeached and removed from office there will be violence. Of that number, 24 percent are “very concerned,” the polling giant said.

But 59 percent said they are worried that those opposed to Trump’s policies “will resort to violence, including 34 percent who are ‘very’ concerned.,” Rasmussen noted.

So far the testimony from the witnesses appearing before the House Intelligence Committee hasn’t come close to establishing impeachable offenses,  but that isn’t going to satisfy Trump’s opponents, who have been trying to get rid of him since election night 2016. Most probably the Bug-eyed Bull-Sh**ting Barrister of Burbank will get his impeachment vote, but there is no way the Senate will remove him.

The release or the Horowitz report on December 9th may spike the anger of the Trump opponents. It is expected to condemn and possibly indict members of the FBI management for violating surveillance laws and/or lying to obtain a FISA warrant to surveil Carter Page. which was the start of the  Russia collusion hoax.  After Horowitz is the John Durham investigation to discover the real details behind the start of the Trump investigation, The Dunham inquiry has become a criminal probe and the scuttlebutt is that Trump-haters will not like the results.

But the Trump opponents haven’t waited for the results of the impeachment farce, or the two investigations to start the violence. The past two years have seen a frightening uptick in violence by Trump’s opponents, some of it was encouraged by public officials like Joe Biden, Eric Holder, and Nancy Pelosi.

The latest Rasmussen report also said, “one-in-three still see the threat of civil war in the near future.” The survey found 31 percent of respondents think it likely the United States will “experience a second civil war sometime in the next five years, although that includes only nine percent who see it as very likely.”

This new survey comes five months after Rasmussen revealed the results of a summer survey which said most voters do not think Trump’s supporters are racists, but half of the Democrats do. The survey found 49 percent of respondents who identified as Democrats think Trump voters are racist, while only 13 percent of Republicans and 23 percent of independents think so.

What these surveys continue to reinforce is the notion that the nation is split and that the chasm appears to be widening.

But there’s another group in the country that voters believe is causing divisiveness. Voters are angriest at the media. An October poll reported that while Trump supporters and opponents are angry at each other, both sides are angry at the media, a total of 61% of all voters. And a later (Nov.14) poll reports that a majority of likely voters (53%) think most reporters are trying to help impeach Trump when they write or talk about the impeachment effort. Seventy-six percent (76%) of Republicans and a plurality (48%) of independents say most reporters are trying to help impeach Trump, a view shared by only 36% of Democrats.”