The Democrats’ Long Tradition Of Violating The Logan Act 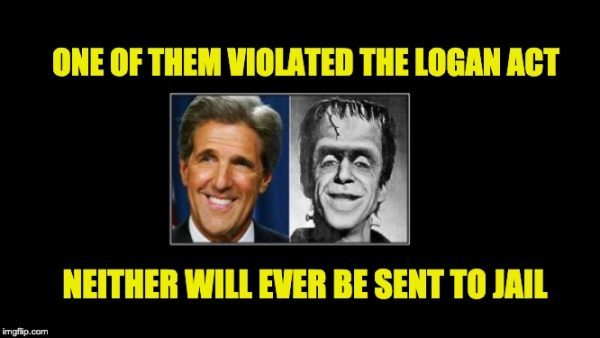 Earlier this week, Mollie Hemingway reported that “Sen. Chris Murphy of Connecticut and other Democratic senators had a secret meeting with Iranian Foreign Minister Mohammad Javad Zarif during the Munich Security Conference last week, according to a source briefed by the French delegation to the conference.”

Immediately people started saying that Murphy and others in his party like John Kerry violated the Logan Act. But it really doesn’t matter because the next person who is sent to jail for violating the Logan Act will be the first person sent to Jail.

If the Act was ever enforced, there would be some famous Democrats in a federal penitentiary.

The Logan Act, an 18th-century law, meant to crack down on unauthorized Americans acting on behalf of the United States during a dispute with foreign governments.

The President correctly made the accusation also.

John Kerry and Senator Chris Murphy grossly violated the Logan Act with respect to Iran. If a Republican did what they did, there would be very serious ramifications!

Kerry responded by saying Trump’s accusation was “another Presidential lie.” The former Secretary of State with the long face was just protecting himself because even if the Munich Security Conference wasn’t counted, John Kerry violated the Act many times in recent years.

During interviews to promote his book in Sept. 2018 Kerry told an interviewer that he met with Iranian Foreign Minister Javad Zarif three or four times since leaving office and that their talks touched on the international nuclear agreement which Kerry negotiated, and President Trump killed ( because it was such a bad deal or America). This was the first time Kerry admitted this violation, but it was reported earlier.

In May of 2018, the Boston Globe reported that Kerry went to the U.N. for a meeting with Iranian Foreign Minister Javad Zarif to discuss ways to save the Iran nuke deal. “It was the second time in about two months that the two had met to strategize over salvaging a deal they spent years negotiating during the Obama administration, according to a person briefed on the meetings.”

In other words, he was actively trying to sabotage U.S. policy.  And this wasn’t the first time.

Some say Senator Tom Cotton’s March 2015 open letter to the Iranian regime was an example of breaking the Logan Act. But the message wasn’t a negotiation, it didn’t even discuss possible terms of a deal. The Cotton letter signed by 47 Senators simply explained how the constitution worked and that any agreement that wasn’t ratified by the Senate could be overturned (which is precisely what happened).

John Kerry wasn’t the only Democrat who went rogue. When Saddam Hussein’s forces invaded Kuwait on Aug. 2, 1990, before Bush’s invasion, the former peanut president  Democrat Jimmy Carter wrote to members of the United Nations Security Council. He asked them not to support the use of force against Hussein.

When Saddam Hussein’s forces invaded Kuwait on Aug. 2, 1990, before Bush’s # 41’s invasion, former the peanut president Jimmy Carter wrote to members of the United Nations Security Council and asked them not to support the use of force against Hussein that Bush was trying to get approved by the Security Council.

Per the Atlanta Journal-Constitution in 2008, Carter met with Hamas against the wishes of President Bush. After days of negotiation, he announced to the world that Hamas was just a peace-loving bunch of good guys, and they were ready to recognize Israel. In a few hours, Hamas responded: they would never recognize Israel.

Even Barack Obama! Five months before the 2008 Election, Barack Obama secretly told Iraq to stall on the Status of Forces Agreement they were negotiating with Bush #43. Amir Taheri reported in the N.Y. Post, ”

After Obama became President the negotiations failed (some say on purpose), which opened up the door for ISIS to grow in Iraq.

Some Democrats claim Michael Flynn violated the Logan Act by dealing with the Russian ambassador during the Presidential transition of Donald Trump. One of them was  Sen. Chris Murphy. As the incoming national security advisor, Flynn’s contact was entirely justified, but Muphy said it was illegal.

In May 2019, Dianne Feinstein (D-CA) was caught on the phone with Javad Zarif, Iran’s foreign minister. It is NOT within her purview to negotiate with Iran, but people only heard one side of the conversation. Therefore we don’t know if Sen. Feinstein was in the middle of an unsanctioned negotiation or arranging a dinner date.  But she should have known not to be making calls like that on an unsecured cell phone, in public.

They certainly violated the spirit of the law. But even if there were formal charges brought up against Mr. Long-face or the other Democratic Party violaters, it would be a waste of time.  In the 220 years since the Logan Act was signed into law, only two people were ever indicted on charges of violating the Act. Francis Flournoy in 1803 and Jonas P. Levy in 1852. Neither one was convicted.