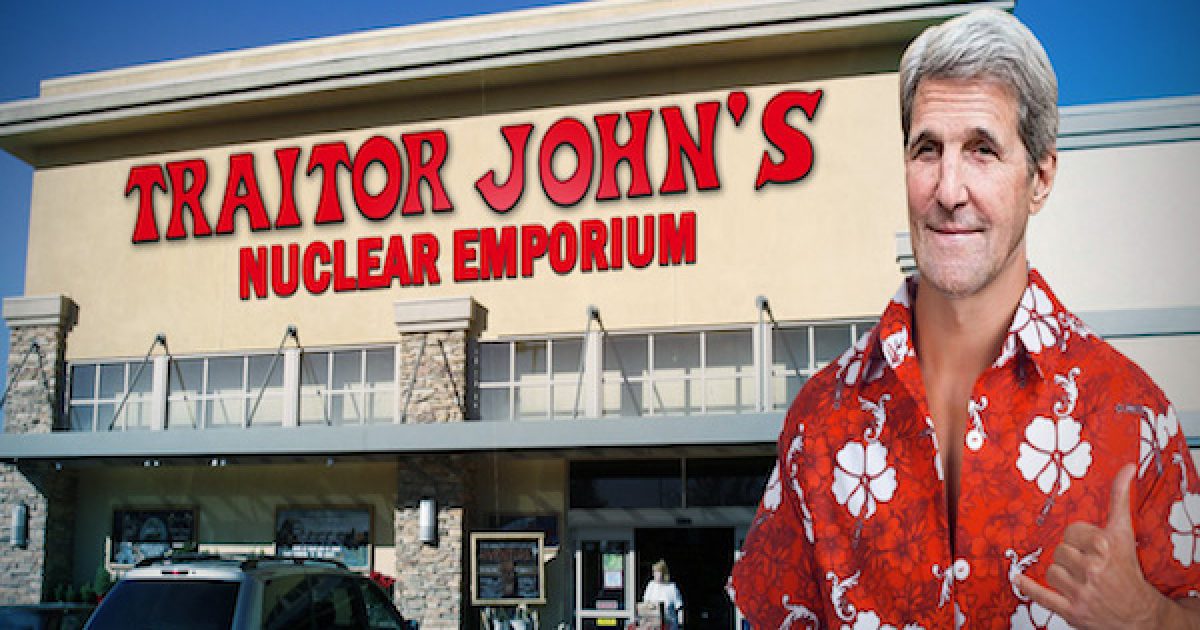 During interviews to promote his new book, Kerry told an interviewer that he has met with Iranian Foreign Minister Javad Zarif three or four times since leaving office and that their talks touched on the international nuclear agreement which Kerry negotiated and President Trump withdrew from because it was such a bad deal.  This was the first time Kerry admitted this violation, but in May of this year, the Boston Globe reported that he had been secretly meeting with the Iranian foreign minister and European leaders, advising them on how to save the flawed JCPOA.

Some are saying that Kerry’s meetings were a violation of the Logan Act, a law that has nothing to do with the Marvel character Wolverine. The Logan Act is a federal law that criminalizes negotiation by unauthorized persons with foreign governments having a dispute with the United States. But violating the Logan act is a tradition for both John Kerry and the Democratic Party.

In 1985, Senator John Kerry traveled to Nicaragua for a friendly get-together with the Sandinista president, Daniel Ortega. The position of the Reagan administration was to support the opposition Contras. Kerry wasn’t much interested in the administration’s position. Upon his return to the United States, Kerry met with President Reagan to convey a message from
Ortega. Reagan “wasn’t thrilled,” Kerry later told the New York Times.

In January 2018 Israeli Newspaper Ma’ariv reported that John Kerry had a message to Palestinian Authority Pres. Abbas, “that he should stay strong in his spirit and play for time, that he should not break and will not yield to President Trump’s demands,” because Trump will be out of office within the year.”

There are those who say Senator Tom Cotton’s open letter to the Iranian regime was an example of breaking the Logan Act, but the message wasn’t a negotiation, it explained how the constitution worked and that if it wasn’t ratified by the Senate it could be overturned (which is precisely what happened).”

John Kerry wasn’t the only Democrat who went rogue. When Saddam Hussein’s forces invaded Kuwait on Aug. 2, 1990, before Bush’s invasion, former the peanut president Jimmy Carter wrote to members of the United Nations Security Council and asked them not to support the use of force against Hussein.

When Saddam Hussein’s forces invaded Kuwait on Aug. 2, 1990, before Bush’s invasion, former the peanut president Jimmy Carter wrote to members of the United Nations Security Council and asked them not to support the use of force against Hussein.

(…) But this was not the end of the ex-President’s efforts. Just days before the announced deadline for Iraq to withdrawal from Kuwait, Carter wrote to the rulers of America’s three most important Arab allies in the crisis—Egypt, Syria, and Saudi Arabia—imploring them to break with Washington: “I urge you to call publicly for a delay in the use of force while Arab leaders seek a peaceful solution to the crisis. You may have to forgo approval from the White House, but you will find the French, Soviets, and others fully supportive.”

Even Barack Obama! Five months before the 2008 Election, Barack Obama secretly told Iraq to stall on the Status of Forces Agreement they were negotiating with Bush #43.

In perspective, Kennedy’s offer to work with the USSR against the president of the United States was much worse than Kerry, Obama, or Carter. However,  instead of being seen as a traitor who tried to ruin what eventually became a successful strategy to win the cold war, he is seen as a great senator, “The Lion of The Senate,” he should be called the “Lying of the Senate.”

The truth is that only two people have ever been indicted on charges of violating the Act, one in 1802 and the other in 1852. Neither was convicted of violating the Act.  So it is doubtful that John Kerry or anyone is will be deterred from creating their own foreign policy.