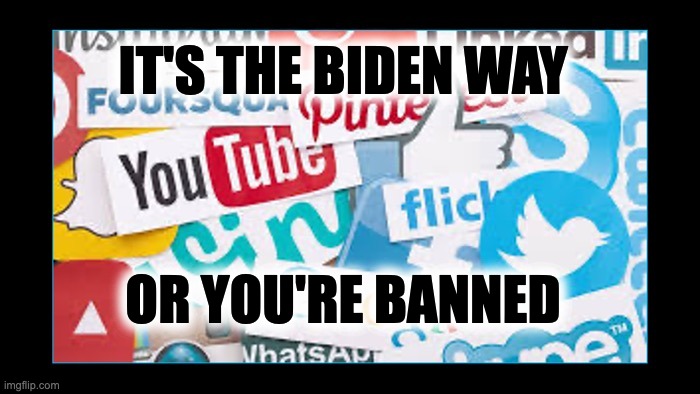 How many people got banned from their favorite social media for writing about the Hunter laptop and providing their opinion about what the government is doing about COVID.

Today, the United States District Court, Western District of Louisiana granted Missouri and Louisiana’s motion for discovery in their lawsuit against top-ranking Biden Administration officials for allegedly colluding to suppress freedom of speech, paving the way for the attorneys general to collect discovery and documents from both top-ranking Biden Administration officials as well as social media giants like Twitter, Meta, and others. The lawsuit was filed on May 5.
d

“In May, Missouri and Louisiana filed a landmark lawsuit against top-ranking Biden Administration officials for allegedly colluding with social media giants to suppress freedom of speech on a number of topics including the origins of COVID-19, the efficacy of masks, and election integrity,” said Attorney General Schmitt. “Today, the Court granted our motion for discovery, paving the way for my Office to gather important documents to get to the bottom of that alleged collusion – this is a huge development.”’

Missouri and Louisiana filed a Motion for Expedited Preliminary Injunction-Related Discovery on June 17, 2022. That motion was granted today by the United States District Court, Western District of Louisiana. The Court’s decision today clears the way for Missouri and Louisiana to gather discovery and documents from Biden Administration officials and social media companies.

While reports of the suit appeared in law journals and law newspapers, there has been little coverage in consumer media until Miranda Devine of the NY Post reported about the suit on October 24th.
f

Victims of the Biden-Big Tech’s “censorship enterprise” include The Post, whose Hunter Biden laptop exposé was suppressed by Facebook and then Twitter in October 2020 after the FBI went to Facebook warning them with great specificity to watch out for a “dump” of Russian disinformation, pertaining to Joe Biden, with an uncanny resemblance to our stories.
dd
“We allege that top-ranking Biden administration officials colluded with those social media companies to suppress speech about the Hunter Biden laptop story, the origins of COVID-19, the efficacy of masks, and election integrity,” is how the lawsuit was summarized by the intrepid Missouri Attorney General Eric Schmitt, who is leading the action
f

Last month the federal Fifth Circuit Court of Appeals ruled that Twitter and other social media platforms don’t have an unlimited right to discriminate against “speech they don’t like.”

“The Platforms are not newspapers. Their censorship is not speech,” the court said. “The First Amendment protects speech: it generally prevents the government from interfering with people’s speech.”

This is a crucial lawsuit. And needs to be followed closely. When it reaches the Supreme Court, the Biden Administration will be sanctioned for ignoring the First Amendment. Social media will be forced to decide whether they are a platform or a publisher. Once the decision is made, the internet will look very different.