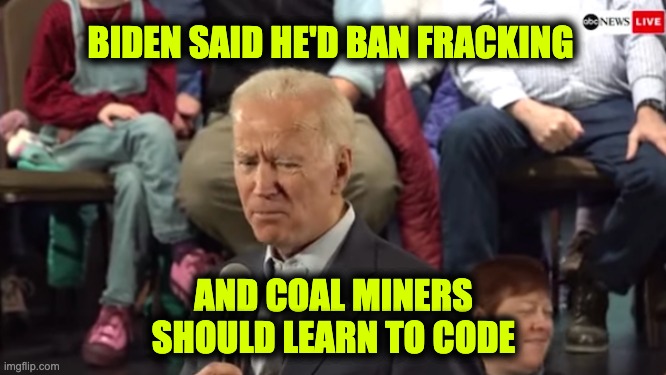 During Thursday’s debate, Joe Biden said he never said he would ban fracking, and there was no video to prove it–a lie. Here’s the debate exchange:

At the end of August of this year, Joe Biden went to Pittsburgh, Pennsylvania, where he spoke to a room with what seemed like less than a dozen people.  While he was there, Biden claimed very strongly, he did not want to ban fracking.  And any claims he that wanted to ban fracking coming from the President or his campaign were lies. But the video evidence reveals Joe Biden promised to stop fracking often during the campaign.

On January 24, 2020, speaking to a New Hampshire voter, Biden said he would stop fracking.

The woman voter asked, “But like, what about, say, stopping fracking?”

In the July 2019 debate on CNN, Biden said, “We would make sure it’s eliminated,” in response to a question about whether his administration would find any place for “fossil fuels, including coal and fracking.”

On March 15, 2020, a Democratic presidential debate between Biden and Senator Bernie Sanders was hosted by CNN, moderated by CNN’s Jake Tapper. During that debate, there was this exchange:

Sanders: What this moment is about Joe, is that the scientists are telling us they underestimated the severity of the crisis. They were wrong. The problem is more severe. So all that I’m saying right here is that we are fighting for the future of this planet, for the wellbeing of our kids and future generations. You cannot continue, as I understand Joe believes, to continue fracking, correct me if I’m wrong. What we need to do right now is bringing the world together, tell the fossil fuel industry that we are going to move aggressively to win solar, sustainable energies-

Biden: No more, no new fracking.

Also in that debate, Biden stated, “Number one, no more subsidies for the fossil fuel industry. No more drilling on federal lands. No more drilling, including offshore. No ability for the oil industry to continue to drill, period, end, number one.”

In Joe Biden’s economy, we stop all fossil fuels, not just Oil, and Gas. In December 2019, Biden told coal miners to learn to code:

Why did Biden say “I am not banning fracking” when everything he said before going to Pittsburgh indicated that he wanted to stop fracking…indeed, he wanted to stop all fossil fuel production. According to the Dept. of Commerce, one reason for the change could be that energy production is big business in Pennsylvania, viz the Pennsylvania Business Report.

Pennsylvania could lose more than 600,000 jobs and roughly $261 billion over the next five years if a national ban on hydraulic fracturing, or fracking, were to be put in place, as some Democratic presidential candidates have called for, according to a recent report by the U.S. Chamber of Commerce’s Global Energy Institute.

Biden’s ban on coal mining would force 5,385 miners to learn to code, per Statista. That doesn’t include revenue and jobs in related industries.

Biden felt so strongly about eliminating fossil fuel production he said he wanted to throw all energy execs in jail.

.@JoeBiden on fossil fuel execs: “We should put them in jail” for pollution pic.twitter.com/OLqZMwi4E5

Putting it all together, Biden’s fracking claim in Pittsburgh, and his claims since Pittsburgh, are just pandering flip flop. He is trying for votes in fracking states but in the end, he will obey his leftist masters.

Biden believes the Green New Deal is a crucial framework for meeting the climate challenges we face. It powerfully captures two basic truths, which are at the core of his plan: (1) the United States urgently needs to embrace greater ambition on an epic scale to meet the scope of this challenge, and (2) our environment and our economy are completely and totally connected.

And don’t forget while Americans today are enjoying affordable, reliable energy we should not become complacent in this election. If  (God-Forbid) Biden wins the presidency, his policies would make us energy-dependent on China giving Beijing control of the entire supply chain.

But then again looking at the recent revelations about Joe and his son Hunter, he might like that. 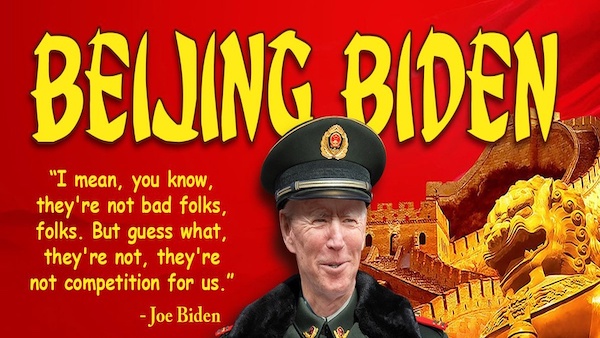