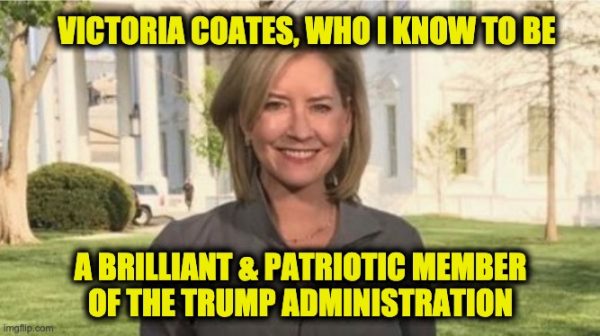 Yesterday paid CNN contributor Miles Taylor was outed as the White House mole called Anonymous.  While the news angered some because he lied on CNN twice, saying he was not Anonymous, others are angry because the NY Times described him as a senior administration official when he was really a flunky. I am angry (and relieved at the same time) for a totally different reason.

While scumbag Taylor was hiding his identity, an actual senior administration official was suspected of being the WH mole. Still, he didn’t care that someone totally unrelated to his story was going through hell because of his actions. Based on no real proof, just some unnamed sources and a speculative April Real Clear Investigations story by Paul Sperry, Victoria Coates was rumored to be the unnamed coward trashing the Trump administration.

After three-plus years on the NSC, Ms. Coates was moved from her position as US Deputy National Security Advisor for the Middle East and North African Affairs to Senior Advisor to Energy Secretary Dan Brouillette. The move expanded her knowledge and skillset while allowing her to keep using her regional knowledge and have extended stays in UAE and Saudi Arabia during a critical time for global energy markets.

While I have dealt with many people who work in the Trump administration, they are very few with whom I can say I’ve interacted with enough to really get a feel for who they are, what makes them tick, behind their public facade. One of them is Victoria Coates. I had the pleasure of interviewing her twice, and as I have mentioned before, she is too honest, too supportive of the administration she was serving in. She guarded secrets too closely to be anonymous.

The day after the former DHS flunky admitted he was Anonymous, Cleta Mitchell, Victoria Coates’ attorney, spoke out. She told the Washington Times that Mr. Taylor is a “total creep.”

“Those who participated in this hoax should be shunned, starting with the New York Times, the publisher, and all concerned,” Ms. Mitchell said. “Those of us who support the president are sick of these quislings and just hope they are all purged and replaced for the next four years.”

Mr. Taylor, who later wrote a book savaging the president, is a “Never Trumper” – that is a Republican from the George W. Bush era working against Mr. Trump.

He served briefly as DHS chief of staff, leaving the department in 2019 and eventually joining CNN as an analyst. In August, he pointedly lied to anchor Anderson Cooper by denying he was Anonymous.

“Anonymous turns out to be a low level functionary who hardly merited the breathless attention paid him during his 15-minutes of fame,” Ms. Mitchell told The Times. “Clearly, had he written and published in his real name, no one no one would have paid the slightest bit of attention. Anonymous is still basically anonymous.”

Attorney Mitchell’s description of Miles Taylor was way too kind. Victoria Coates released a statement after the Taylor admission:

“I’m pleased that the bizarre and malicious allegation that I am. ‘Anonymous’ has finally been definitively refuted. This nonsense has been an unfortunate distraction from the actual work that all of us who are around to serve President Trump and help implement his agenda should be focused on.”

Coates joined the Trump administration in 2017 after working three years as a foreign policy adviser to Senator Ted Cruz (R-TX). Before that, she was an adviser to former Texas governor Rick Perry during his 2012 presidential campaign.

Victoria Coates has an incredible background story. She received her Ph.D. in Art History from the University of Pennsylvania in 1998. While teaching at UPenn, she began to blog under the pseudonym  “AcademicElephant” for RedState, where her writing covered mostly defense,  foreign policy, national security.  Aides to Donald Rumsfeld would sometimes slip one of her columns in his daily reading folder, and he quickly became a fan. The former Defense Secretary got in touch with the site, telling him that he wanted to meet “that military guy,” only to find out that “she” wasn’t a guy and wasn’t military, but a brilliant historian and strategic thinker. Coates soon left academia to work with Rumsfeld on his autobiography.’

Dr. Coates’ first appearance on the Lid Radio show was in November 2017 when she was the Special Assistant to the President and member of the National Security Council for the Trump Administration. It was possibly the most exciting episode the show ever had. We had a far-ranging discussion where she explained exactly what the National Security Council does and described the latest news about some of the hottest of foreign policy hotspots, including North Korea and Iran. Of course, her answers were within the boundaries of what she was allowed to say without breaching America’s secrets. We also spent some time on her book published the year before,  David’s Sling: A History of Democracy in Ten Works of Art. (which is available from Amazon).

In Victoria’s May 2018 appearance on the show, we learned she had added Senior Director for International Negotiations to her responsibilities. She had just come back from Israel, where she attended the new United States Embassy’s opening ceremony in Jerusalem (I am still jealous). Both interviews are embedded below.

Are you going to publish a retraction of this embarrassment? https://t.co/QCg0OIvXEo

Along with Tom Bevan, the  New York Times, Paul Sperry, and everyone else who falsely accused Victoria Coates of being the anonymous creep should make very public apologies to her. She has too much class to take the suggestion I offered her yesterday when the news came out (I hope you give a large helping of “F-U” to everyone who thought it was you).

I am so happy for Victoria that those fake accusations are finally gone. I am even happier for America that a person with loyalty, high morals, and intelligence is serving in the administration, working hard to make America great again (even if she is a Philadelphia Phillies fan).

If you wish to listen to the Lid Radio Show interviews of Dr. Victoria Coates, they are embedded below:

Listen to “Nov. 8 Guest Victoria Coates Special Asst. To POTUS Member of the NSC” on Spreaker.

Listen to “5/16 Guest, Victoria Coates: Special Asst. To The President, Member Of The NSC” on Spreaker.