A Lesson For Americans: Venezuelan Exile Rues The Day They Let Hugo Chavez Take Their Guns 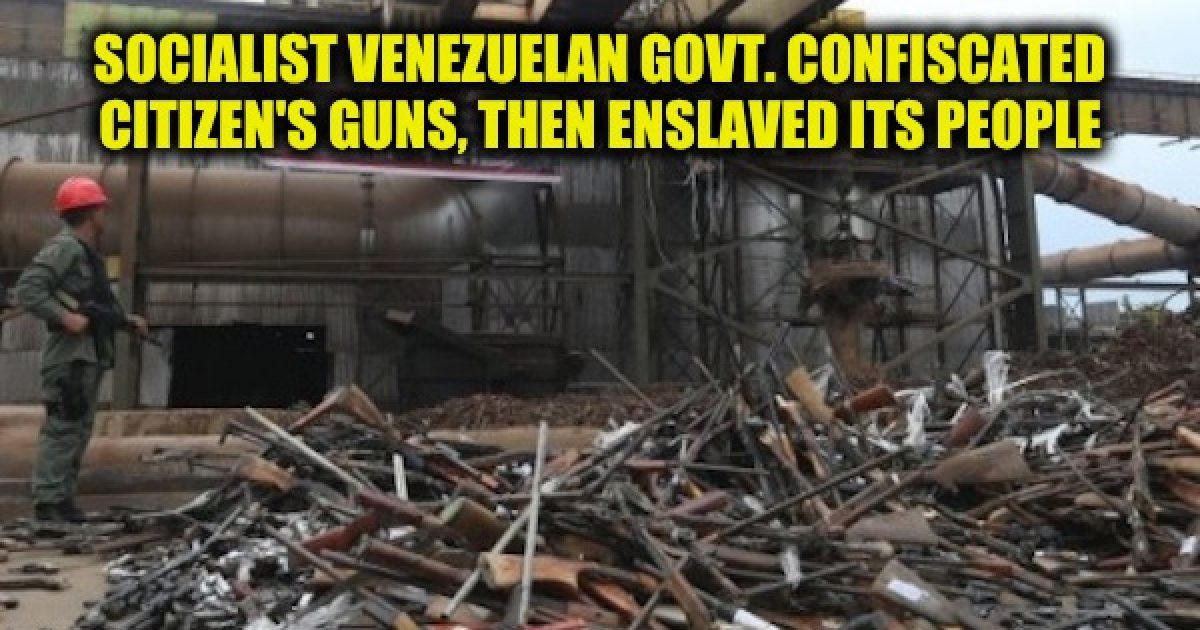 This story should be a lesson for all Americans. An exiled teacher from Venezuela, now living in Equador, was quoted by Fox News Friday as lamenting the fact that his countrymen allowed themselves to be disarmed before they were enslaved by the socialist government first run by Hugo Chavez and now run by Nicolas Maduro.

Under the direction of then-President Hugo Chavez, the Venezuelan National Assembly in 2012 enacted the “Control of Arms, Munitions and Disarmament Law,” with the explicit aim to “disarm all citizens.” The law took effect in 2013, with only minimal pushback from some pro-democracy opposition figures, banned the legal commercial sale of guns and munitions to all – except government entities.

Chavez initially ran a months-long amnesty program encouraging Venezuelans to trade their arms for electrical goods. That year, there were only 37 recorded voluntary gun surrenders, while the majority of seizures – more than 12,500 – were by force.

In 2014, with Nicolás Maduro at the helm following Chavez’s death but carrying through his socialist “Chavista” policies, the government invested more than $47 million enforcing the gun ban – which has since included grandiose displays of public weapons demolitions in the town square.

If one gets caught illegally owning or selling a gun in Venezuela today, the jail sentence is twenty years. 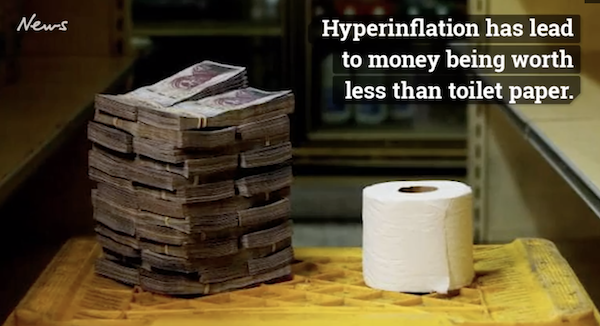 And even worse, there is a chronic shortage of toilet paper, perhaps they could use the paper money.
According to News.com.au, the nation’s economy is in such bad shape that Venezuelan currency is worthless, and fired workers are not being compensated.

Some of the highest inflation in history, US sanctions, and a bloody civil war are causing global companies to abruptly cease business in Venezuela — but they aren’t compensating fired workers with physical money anymore.

Due to record inflation, money in Venezuela has been rendered completely worthless and one glaring example came earlier this week when tire giant Goodyear announced it would no longer be able to produce rubber or tires in the crisis-wracked country.

(.,,)The US-based company said it would be giving its employees 10 tyres as part of their severance package — an item that’s become incredibly valuable on the Venezuelan black market.

The government security forces, at the beginning of this debacle, knew they had no real opposition to their power. Once things were this bad, it was an explicit declaration of war against the unarmed “regular people.”

“Venezuelans didn’t care enough about it. The idea of having the means to protect your home was seen as only needed out in the fields. People never would have believed they needed to defend themselves against the government,” Vanegas explained. “Venezuelans evolved to always hope that our government would be non-tyrannical, non-violator of human rights, and would always have a good enough control of criminality.”

He said it didn’t take long for such a wide-eyed public perception to fall apart. “If guns had been a stronger part of our culture if there had been a sense of duty for one to protect their individual rights, and as a show of force against a government power – and had legal carry been a common thing – it would have made a huge difference,” he lamented.

“Venezuela shows the deadly peril when citizens are deprived of the means of resisting the depredations of a criminal government,” said David Kopel, a policy analyst, and research director at the Independence Institute and adjunct professor of Advanced Constitutional Law at Denver University. “The Venezuelan rulers – like their Cuban masters – apparently viewed citizen possession of arms as a potential danger to a permanent communist monopoly of power.”

The law taking away firearms was sold to the people a way to prevent gun crimes. Gee, where have I heard that before? But since the gun ban:

The violent crime rate, already high, soared. Almost 28,000 people were murdered in 2015 – with the homicide rate becoming the world’s highest. Compare that, according to GunPolicy.org – an international firearms prevention and policy research initiative – to just under 10,000 in 2012, and 6,500 thousand in 2001, the year before Chavez came to power.

The total number of gun deaths in 2013 was estimated to 14,622, having steadily risen from 10,913 in 2002. While comprehensive data now goes unrecorded by the government, in September this year, Amnesty International declared Venezuela had a murder rate “worse than some war zones” – 89 people per 100,000 people – and three times that of its volatile neighbor Brazil.