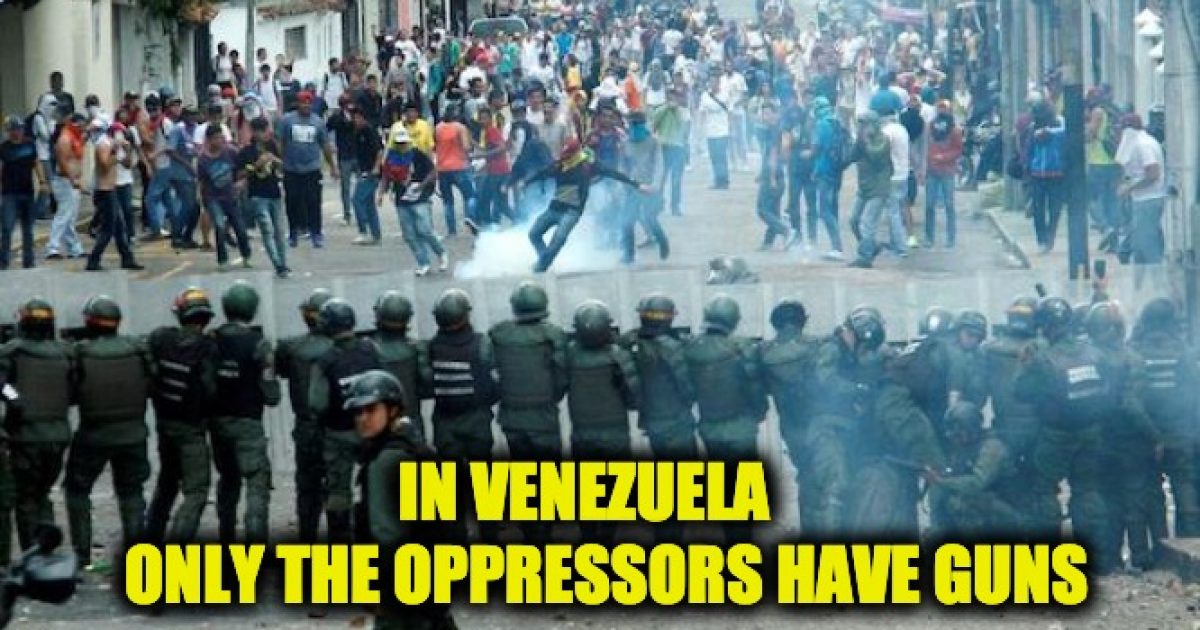 “[Venezuela] gun reform policy of the government was about social control.  As the citizenry got more desperate and hungry and angry with the political situation, they [the government] did not want them [the citizenry] to be able to defend themselves.  It was not about security; it was about a monopoly on violence and social control.”  —Vanessa Neumann, Venezuelan-American president and founder of Asymmetrica, speaking out about Hugo Chávez’s confiscation of private arms in Venezuela

“Hitler, Mussolini, Stalin, Mao, Idi Amin, Castro, Pol Pot.  All these monsters began by confiscating private arms, then literally soaking the earth with the blood of tens and tens of millions of their people.  Ah, the joys of gun control!”  —Charlton Heston, addressing the importance to the people of the right to bear arms and the glee despots feel in its absence

In a free republic, the people control the government—not the other way around.  Any state where the government is the sole owner and bearer of weaponry is, by definition, a police state.  And there has never been a police state anywhere in the world where the people have been able to remain free.  It was Thomas Jefferson who once said, “When government fears the people, there is liberty.  When the people fear the government, there is tyranny.”  Charlton Heston, the patriotic actor who served as president of the National Rifle Association—while speaking about Americans’ Constitutional right, under the Second Amendment, to keep and bear arms—made the following statement:

“I say that the Second Amendment is, in order of importance, the first amendment.  It is America’s First Freedom, the one right that protects all the others.  Among freedom of speech, of the press, of religion, of assembly, of redress of grievances, it is the first among equals.  It alone offers the absolute capacity to live without fear.  The right to keep and bear arms is the one right that allows ‘rights’ to exist at all.”

Venezuelans Lose Their Right to Live Without Fear

In 2012, under the direction of President Hugo Chávez, the Venezuelan National Assembly authorized the “Control of Arms, Munitions, and Disarmament Law,” for the express purpose of disarming the citizenry.  Venezuela’s victim-disarmament law went into effect in 2013, banning the commercial sale of firearms to private citizens.  The only two non-military groups who would retain their arms would be the outlaws and the police, with law-abiding citizens caught in between.

Joseph Albanese, writing for Range365, describes the situation succinctly and accurately: “In 2012, then-President Hugo Chávez banned firearm ownership by private citizens in Venezuela, leaving the unarmed populace unable to defend themselves from criminals and corrupt government officials alike.  In the years following, the crime rate and government abuses increased at an unprecedented rate.”   In fact, in 2015, Venezuela had the highest murder rate in the world, with almost 28,000 people murdered out of a population of a little more than 31 million. This means that about one out of every 1,100 citizens was a homicide that year.  During 2001, only 6,500 homicides had been committed in Venezuela.  Although Venezuela has stopped keeping records of its homicide rate in recent years, Amnesty International reported, in September 2018, that Venezuela still suffers from a murder rate of about 89 people per 100,000, making the disarmed country worse than some war zones.

The slaughter of Venezuela’s populace by gun-toting street criminals, as well as government bad-actors, has been a catastrophe for the human rights of the people of Venezuela.   Javier Vanegas, a Venezuelan teacher of English, now living in exile in Ecuador, commented on the ragtag uprising of unarmed Venezuelans against murderous government forces in recent weeks: “Guns would have served as a vital pillar to remaining a free people, or at least able to put up a fight.  The government security forces, at the beginning of this debacle, knew they had no real opposition to their force.  Once things were this bad, it was a clear declaration of war against an unarmed population.”

Of course, in the United States socialist Democrats, such as Alexandria Ocasio-Cortez and Bernie Sanders, refused to denounce the continuing abuses of the people’s natural rights and the relentless onslaught of government butchery under the Maduro regime. Also here in America, the people have wisely chosen to retain their ability to keep the power of the government in check by maintaining their God-given right to keep and bear arms.  Despite all of the socialist indoctrination carried out by Marxists in America’s deeply-infiltrated and now-corrupt university system, there are still enough Americans who understand that, once America gives up its Second Amendment right to self-defense, the United States will cease to be a free country.

The Worst Humanitarian Crisis in the History of the Americas

“Venezuela’s socialist dictator Nicolás Maduro has triggered the ‘worst humanitarian crisis in the history of the Americas’ with the help of Cuba, Russia, China, and terrorist groups,” according to the executive director of the Foundation for Human Rights in Cuba, as reported by Breitbart News.  And Venezuelans are only seven years out from having lost their right to self-defense.   This is the same situation in which America might find itself if Americans voted for Kamala Harris for president.  Harris has promised that, if she were elected chief executive, she would take dictatorial “executive action” to ban gun rights within the first 100 days of her administration, unless the representatives of the people legislated according to her desires.  According to Breitbart, Harris has actually said, “Upon being elected, I will give the United States Congress 100 days to get their act together and have the courage to pass reasonable gun safety laws, and if they fail to do it, then I will take executive action.”  However, votes by the Congress to infringe the Second Amendment are illegal, according to the language of the Constitution, just as executive actions to modify any of the rights of people also are illegal.  Obviously, breaking the law is not a problem for an oath-breaker like Kamala Harris.

Hitler Too Was a Democratically-Elected Socialist Who Disrespected Individual Rights

Never forget that Hitler was a socialist (of the National Socialist German Workers’ Party), the same as Harris.  Socialism is all about canceling individual and minority rights, in favor of giving the majority of the moment the power to approve who is permitted to do what—effectively eliminating God-given rights in favor of an ethic of government-granted privileges.  If a socialist majority goes too far in changing the government to its advantage, the political pendulum may never be allowed the opportunity to swing back in the direction of individual rights, and liberty may be lost forever, due to the anti-freedom enabling acts of what otherwise would have been a temporary majority.  This is why democracy is dangerous, and republicanism is not; democracy is government by the whim of the majority, even a temporary majority, rather than government by the rule of law.  John Adams’ famous statement about the rule of law, concerning the Constitution for the Commonwealth of Massachusetts, was

In a free republic, once the essential rights and rules have been decided upon, and put into place, no temporary majority, nor any political leader, may change them.  Thus, a constitutional republic, on a practical level, offers permanent safety to all individuals and a deliberative process by which other matters are considered and legislated by means of competing, co-equal branches of government that are designed to slow down and block all but the most unimportant issues from getting attention.  Fewer laws being passed means more freedom for the people.

Thus, a republic is about the rule of law under a Constitution that fences off individual rights as unalienable and, therefore, not up for a democratic vote.  If the Constitution is adhered to, then no majority vote anywhere in the republic can remove the rights of any individual person or minority group.  In America’s republic, three-fourths of the states (or 38 out of 50) are needed to remove or amend any right of the people. Although it would seem that socialist Democrat leaders, such as Kamala Harris, might simply choose to by-pass the Constitution altogether, by acting as a dictator and packing the Supreme Court with extra justices appointed by herself, to ensure her success.  This would, of course, mean that Harris would be controlling “the legislative and judicial powers” in addition to her powers as president.  Liberty would be lost to the people, as a result.

As the people of Venezuela seek to oust the despotic Maduro, the question remains as to whether or not the Venezuelan people will regain the right to own firearms.  If a change in leadership, possibly from Maduro to Guaidó, occurs in Venezuela, will the new leader—a member of the centrist social-democratic Popular Will party—see his way to restoring gun rights, or will he too choose to keep the people disarmed and defenseless?  It is a question no one can really answer for sure.  The only certain thing is this: Once individual rights have been lost or surrendered to socialism, the chances of regaining any of those rights are doubtful at best.  What is happening in Venezuela is an essential lesson for all who love freedom.  Hopefully, the lesson will not be lost on the vast majority of Americans.  So, even as Americans’ thoughts and prayers are with the people of Venezuela in coming weeks, it might also be appropriate for Americans to spend some time praying for their own country as well, that it may continue as one nation, under God, with liberty and justice for all.

Who Is Paul Dowling?
Paul Dowling is an American patriot who believes that individual freedom and minority rights that only a republic can protect are the linchpins of Western Civilization.  Paul has written a book on the Constitution, explaining the republican values on which it is based and how they protect against the dangers of a strictly majoritarian system of governance.  The book is called Keeping a Free Republic: Learning the Blueprint for Liberty in the Constitution & the Bill of Rights.  (It is on sale at Amazon, for $6.25 in paperback and $0.99 as a Kindle download