Maria Bartiromo Keeps Her On The Hook 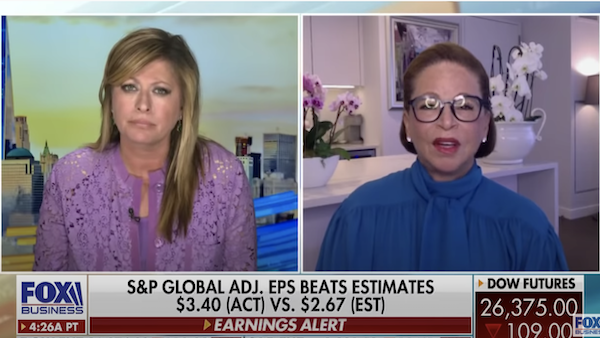 There’s a saying, ‘when you’re taking flak, you know you’re over the target.’ Is that why Obama insiders are pushing so hard to look away from what REALLY kicked off their illicit Spying on Trump? That’s one of the reasons the Democrats on the House Judiciary Committee kept on charging Attorney General Barr with making the DOJ political–John Durham must be over the target. Many journalists with better contacts than this reporter are indicating that criminal charges coming from Mr. Durham are imminent.

Valerie Jarrett, one of the most loyal members of Obama’s inner circle, went onto Maria Bartiromo’s show to run interference for her colleagues on team Obama. Jarrett made a plea that sounded an awful lot like one made by Bill Clinton’s loyalists all those years ago. They even named a website after it. MoveOn. Perhaps you’ve heard of it.

On Maria’s show, Jarrett, with a straight face, gave us the old ‘move along, there’s nothing to see here’ line. How convenient that you’re claiming that was too long ago

“I have a high degree of confidence in our intelligence community, investigators comported themselves responsibly,” Jarrett answered, “Lindsey Graham is the one that encouraged Sen. McCain to turn over the dossier in the first place to the FBI.”

I do know that it’s nearly four years ago, and I don’t understand why our focus isn’t on what’s happening right now and today. That’s the investigation I’d like to see,” Jarrett said.

Bartiromo responded with, “What’s happening right now is we are learning the details of what took place and we are getting official confirmation that the FBI knew that the dossier was garbage and made up in a bar because the sub-source of the dossier told FBI officials in early January.” And asked Jarret if she wanted Flynn unmasked also.

“I was not involved in any of those conversations,” Jarrett countered “But the question I really want to put to you is, what are we doing today? If people want to have an investigation about what happened four years ago, they should do that. But aren’t you concerned about what’s going on right now? Aren’t you worried about the integrity of our upcoming elections? Aren’t you worried about how we’re going to have a safe and fair election?”

In other words…move on there’s nothing to see here.

Bartiromo’s response was that she was a patriot and the reason she was she was asking Jarrett about the scandal was to ensure fair elections in the future. And she kept on the pressure. “You’re saying you knew nothing about it? You were President Obama’s right hand. A lot of people wonder how much President Obama directed this. So I ask you, did President Obama direct any of this?” the Fox host demanded.

“That’s not how it works. Jarrett answered,” That’s not how our investigations work. But we leave that to the intelligence community to bring forward information and the dossier, I would imagine would be one piece of a much bigger puzzle,” Jarrett responded. “If you’re saying is it important to make sure that there isn’t influence and actually the Mueller report didn’t conclude there wasn’t any wrong-doing. He was explicit in saying quite the opposite.”

Oh my, she was Obama’s closest advisor and she couldn’t read? The Mueller report said that there was no one in America that colluded with the Russians.

I believe that’s known as a deflection.

Watch the video below and see Maria Bartimoro keep Ms. Jarrett in the corner with tough questions, Jarrett’s tap-dancing around the truth was very obvious.