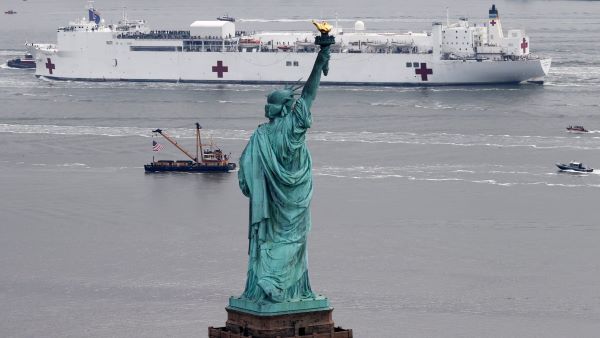 Rachel Maddow gets yet another prediction wrong. USNS Comfort

Maddow is so busy trying to blame Trump for literally everything that she cannot even acknowledge when he gets something right.

Remember, she is the one with the “big reveal” of Trump’s tax returns–which showed that he paid his taxes. It was so bad that even the normally left-friendly late-night hosts mocked her for it.

This is the same serial liar that pushed the “Russian Collusion” fairytale for three years.

And who could forget her tearful reaction to Election Night 2016?  Well, I can because I was busy celebrating. Here it is as a nice reminder

That reaction… those tears… it’s been three and a half years and I still can’t get enough of it!

Recently, the “Russian Collusion” Truther said that President Trump’s COVID-19 pressers shouldn’t be televised because he “lies” to the American people.

Clearly, self-awareness isn’t one of her strengths.

Last week, she mocked the idea that the Naval hospital ships would arrive in New York this week as Trump said that they would.

Watch her call it “nonsense.”

But, hey, she’s not so great with predictions…

The USNS Comfort, the same hospital ship that docked in the New York harbor to assist after 9/11, arrived on Monday morning.

“There she is,” New York Gov. Andrew Cuomo said as the ship docked at Manhattan’s Pier 90.

“If there is ever a time that we need to work together it is today,” he added. “The president is right – this is a war. And what does this nation do when it’s at war? It comes together and it acts as one.”

Maddow’s home network, MSNBC reported that the USNS Comfort will be easing some of the burdens on the New York hospital system by taking non-COVID-19 patients with minor to critical conditions. The ship has 1,000 beds and a medical staff of 1,200 and is normally used to treat troops wounded in battle, but the battle we’re facing is one of a very different sort.

Since it is docked in Manhattan, I wonder if it will have to sail to New Jersey on Tuesdays and Thursdays for alternate side of the Hudson docking.

The White House said the 1,200 “doctors, nurses, anesthesiologists, X-ray technicians, orderlies and other medical staff” on board the vessel “will augment and support New York City’s medical community and conserve hospital capacity by treating some non-COVID-19 patients.”…

…”This great ship behind me is a 70,000-ton message of hope and solidarity to the incredible people of New York, a place I know very well, a place I love,” President Trump said in Norfolk, Va., on Saturday, prior to the ship’s departure. “We’re here for you. We’re fighting for you and we’re with you all the way and we always will be.”

On the West Coast, Trump has deployed the USNS Mercy hospital ship to Los Angeles, where it is now serving “as a referral hospital for non-COVID-19 patients” who are currently hospitalized on land.

In order to ensure that those on the ship don’t contract coronavirus, all of the medical staff were pre-screened before departure and each patient will be screened before coming aboard.

Maddow isn’t even as accurate as a stopped clock, but she keeps making predictions.

And MSNBC still lets her on the air.

How embarrassing for them both.