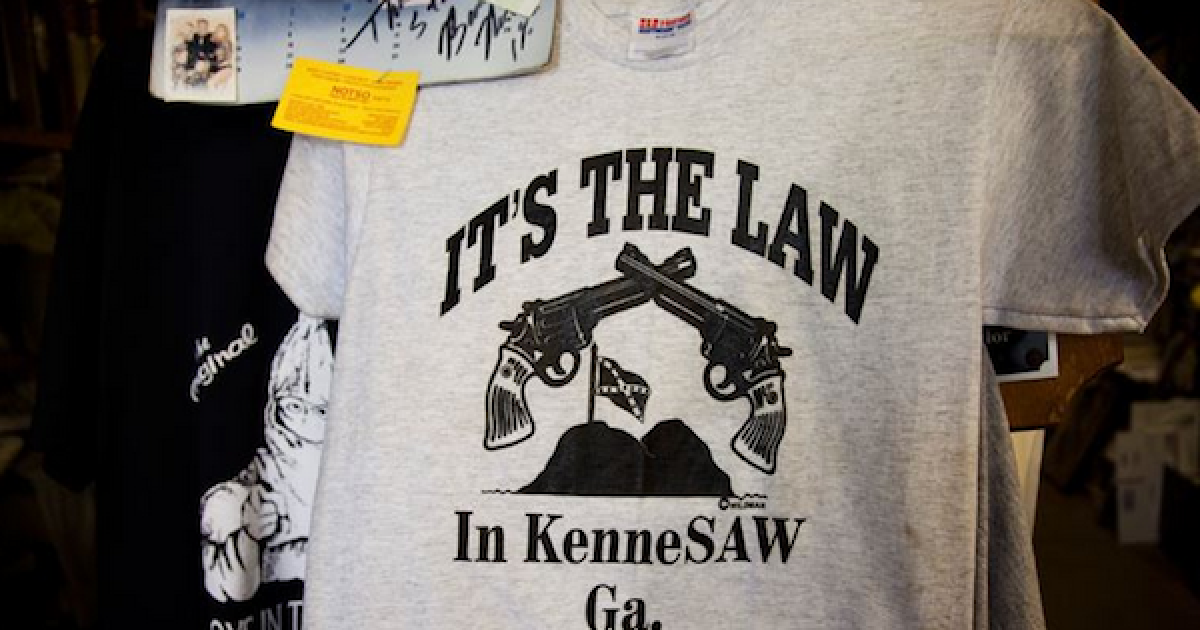 The anti-Second Amendment crowd is on the warpath again. I live just a few miles from the most pro-gun city in the United States – Kennesaw, Georgia – where gun ownership is mandatory. It’s not the “Wild West” like some people predicted it would be when city officials passed a mandatory gun ownership law. Eleven years ago, “the city of Kennesaw was selected by Family Circle magazine in August 2007 as one of the nation’s ‘10 best towns for families.’ The award was aimed at identifying the best communities nationally that combine big-city opportunities with suburban charm, a blend of affordable housing, good jobs, top-rated public schools, wide-open spaces, and less stress.”1

Little has changed in eleven years:

CNN admitted in a report on March 7, 2018, that a Georgia town requiring gun ownership has only seen one murder in six years and maintains a violent crime rate of less than two percent….

CNN suggested the law requiring gun ownership is not actually enforced, but it simultaneously reported that the town of Kennesaw has only witnessed one murder in the past six years. In other words, just the common knowledge that guns are in the hands of law-abiding citizens appears to restrain the actions of criminals.

Kennesaw Police Department Lt. Craig Graydon said, “It was meant to be kind of a crime deterrent.”

In 1982 the city passed the following ordinance [Sec 34-21] which was in response to a handgun ban in Morton Grove, Ill.

The city’s website states that Kennesaw “has the lowest crime rate in Cobb County,” one of the most populous counties in Georgia. In fact, from 1982 through 2009, Kennesaw had been nearly murder free with one murder occurring in 2007.

There were three murders in 2010 committed by the same man in what is described as a “school safety zone,” an area extending 1,000 feet from any school, including adult colleges and technical schools. This means that even though Kennesaw has the most liberal gun laws in the United States, employees at the facility where the murders were committed could not have a gun on the premises to protect themselves. It was a soft target.

Now we come to New York City. In September 2011 Ryan Jerome, a former Marine Corps gunner, walked up to a security officer at the Empire State Building and asked where he could check his gun.

He had a valid concealed carry permit from his home state of Indiana. He also had the rights given to him under the Second Amendment. No matter, the security officer called police and Jerome spent the next two days in jail. “The 28-year-old with no criminal history now faces a mandatory minimum sentence of three and a half years in prison. If convicted, his sentence could be as high as fifteen years.”

He brought the gun for protection since he was traveling with $15,000 worth of jewelry that he planned to sell. Certainly, a rational decision, given the crime rate in New York City and stories like the U.S. Marine veteran who was shot three times when a Craigslist transaction went bad.

In December of 2011, Tennessee nurse Meredith Graves noticed a “no guns” sign at the World Trade Center site in New York City and asked where she could leave her weapon. Like Jerome, she was arrested and faced similar charges. Mayor Bloomberg claimed that she was in possession of cocaine. It seems that what the police found was BC Powder, an over-the-counter pain reliever that is popular in the South.