Uranium One Informant’s Explosive Testimony Against The Clintons 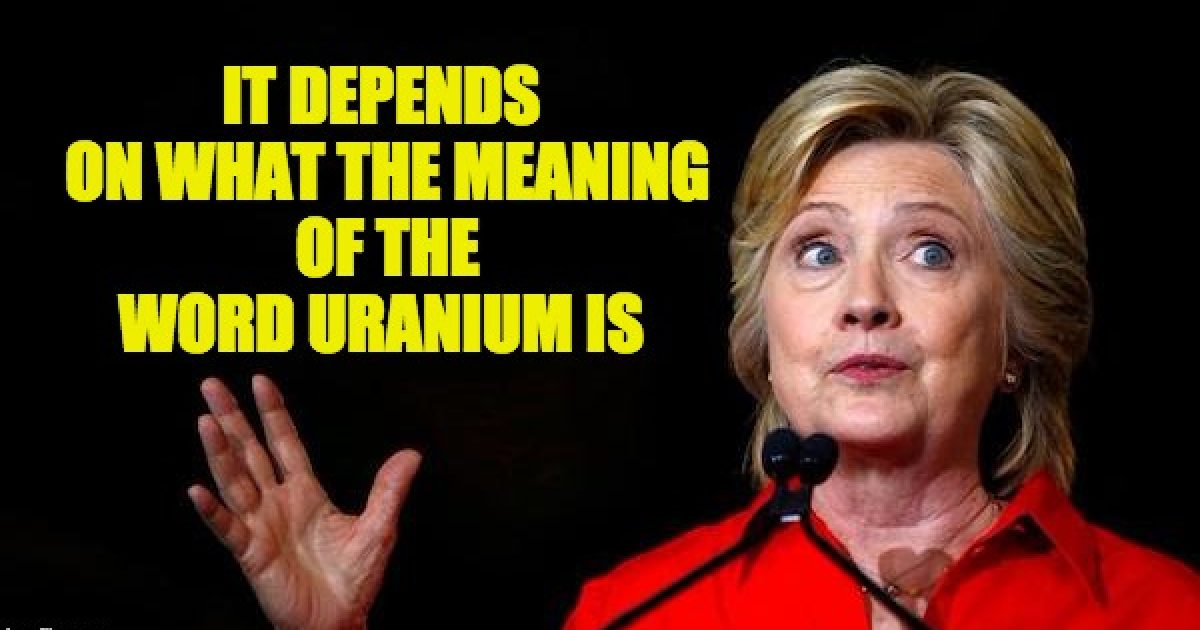 Facebook Twitter Flipboard
The Hill got a copy of the written testimony of the Uranium One informant Douglas Campbell who told three different congressional committees about the Russian attempts to influence the Hillary Clinton who was then the Secretary of State for Barack Obama. Campbell testified that  the Russians sent millions of dollars to the US to be used for the Bubba-led Clinton Family Foundation, at the same time Hillary Clinton was leading the “reset” of  US-Russian relations. Campbell said he was told by “Russian nuclear executives that Moscow had hired the American lobbying firm APCO Worldwide specifically because it was in position to influence the Obama administration, and more specifically Hillary Clinton.”

Campbell said Russian nuclear officials “told me at various times that they expected APCO to apply a portion of the $3 million annual lobbying fee it was receiving from the Russians to provide in-kind support for the Clinton’s Global Initiative,” he added in the testimony.

“The contract called for four  payments of $750,000 over twelve months. APCO was expected to give assistance free of charge to the Clinton Global Initiative as part of their effort to create a favorable environment to ensure the Obama administration made affirmative decisions on everything from Uranium One to the U.S.-Russia Civilian Nuclear Cooperation agreement. “

APCO officials told The Hill a different story.  They claim their Clinton Foundation work and their Russian work were separate and even involved different divisions of the company. “They added their lobbying for Russia did not involve Uranium One but rather focused on regulatory issues aimed at helping Russia better compete for nuclear fuel contracts inside the United States.”

“APCO Worldwide’s activities involving client work on behalf of Tenex and The Clinton Global Initiative were totally separate and unconnected in any way,” APCO told The Hill in a statement. “All actions on these two unconnected activities were appropriate, publicly documented from the outset and consistent with regulations and the law. Any assertion otherwise is false and unfounded.”

Nick Merrill, a spokesman for Clinton, said Campbell’s testimony is simply being used to distract from the investigations into President Trump and Russia. Of course Peter Schweitzer broke the Uranium One story in April of 2015 long before team Clinton perceived of the Russia investigation.

In his written testimony Campbell accused Obama administration officials “of making decisions that ended up benefitting the Russian nuclear industry, which he said was seeking to build a monopoly in the global uranium market to help President Vladimir Putin seek a geopolitical advantage over the United States. ”

Campbell wrote that Russian nuclear executives “boasted” during vodka-fueled meetings monitored by the FBI about “how weak the U.S. government was in giving away uranium business and were confident that Russia would secure the strategic advantage it was seeking in the U.S. uranium market.”

He also said he asked his FBI handlers why the U.S. was not more aggressive.

“I expressed these concerns repeatedly to my FBI handlers. The response I got was that politics was somehow involved,” he testified.

Much of the GOP’s interest in Campbell’s testimony centers on the Obama administration’s approval of the Uranium One deal. That deal at the time gave the Russian mining giant Rosatom control of roughly 20 percent of America’s capacity to mine uranium.

The deal was approved unanimously in 2010 by the Committee on Foreign Investment in the United States (CFIUS), a multi-agency board that includes the State Department, the Defense Department and the Justice Department, among other agencies. The board has the power to block deals that threaten national security.

Campbell, whose work as an informant was first disclosed in a series of stories published last fall by The Hill, helped the FBI gathered evidence as early as 2009 that the Russian nuclear industry was engaged in a kickback, bribery and racketeering scheme on U.S. soil. The criminal scheme, among other things, compromised the U.S. trucking firm that had the sensitive job of transporting uranium around America, Campbell testified.

Campbell says he provided the FBI the evidence of wrongdoing months before the Obama administration approved a series of favorable decisions that enriched Rosatom, including the CFIUS decision.

The Hill’s stories last fall prompted the Justice Department to take the rare step of freeing Campbell from his nondisclosure agreement as an intelligence asset so he could testify to Congress about what he witnessed inside Russia’s nuclear industry.

Campbell gave the congressional committees documents he said he provided to his FBI handlers in 2010 showing that the Russian and American executives implicated in the Tenex bribery scheme specifically asked him to try to help get the Uranium One deal approved by the Obama administration.

“In 2010, officials inside Tenex became interested in helping another Rosatom subsidiary, ARMZ, win Obama administration approval to purchase Uranium One, a Canadian company with massive Kazakh and large U.S. uranium assets,” Campbell testified.  “Although Tenex and ARMZ are separate subsidiaries, Tenex had its own interest in Uranium One.  Tenex would become responsible for finding commercial markets and revenue for those uranium assets once they were mined.

“The emails and documents I intercepted during 2010 made clear that Rosatom’s purchase of Uranium One – for both its Kazakh and American assets – was part of Russia’s geopolitical strategy to gain leverage in global energy markets,” he testified.  “I obtained documentary proof that Tenex was helping Rosatom win CFIUS approval, including an October 6, 2010 email …  asking me specifically to help overcome opposition to the Uranium One deal.”

Campbell told lawmakers the purchase of the Uranium One assets and the securing of billions of new uranium sales contracts inside the United States during the Obama years were part of the “Russian uranium dominance strategy.”

“The importance of the Uranium One decision to Tenex was made clear by the fact that the Russian government directed Mikerin to open a new U.S. office for Tenex and to create a new American entity called Tenam in early October 2010, just weeks before Rosatom and ARMZ won the Obama administration approval to buy Uranium One,” he said.

“Rosatom/Tenex threw a party to celebrate, which was widely attended by American nuclear industry officials. At the request of the FBI, I attended and recorded video footage of Tenam’s new offices,” he added.

Campbell’s written testimony covered a wide array of activities he conducted under the FBI’s direction, ranging from a failed sting effort to lure Putin to the United States to gathering evidence that Russia was “helping Iran build its nuclear capability.”

Campbell provided Congress an April 16, 2010, memo he said he wrote and gave to the FBI that spelled out in detail the Russian efforts to aid Iran.

“Tenex continues to supply Iran fuel through their Russian company,” Campbell wrote in that 2010 document obtained by The Hill, naming the specific company that was being used to help. “They continue to assist with construction consult [sic] and fabricated assemblies to supply the reactor.  Fabricated assemblies require sophisticated engineering and are arranged inside the reactor with the help and consult” of Russians.

“The final fabricators to Iran are being flown by Russian air transport due to the sensitive nature of the equipment,” his 2010 memo to the FBI added.

Campbell told lawmakers he also gave the FBI “documentary proof that officials in Moscow were obtaining restricted copies of IAEA compliance reports on Iranian nuclear inspections, a discovery that appeared to deeply concern my handlers.”

While most of his testimony involved intelligence matters, Campbell also briefly described the toll years of undercover work took on him personally. He continued informing through a bout with brain cancer, a case of leukemia and battles with excessive drinking, he told lawmakers.

On Wednesday Campbell spent a few hours giving testimony to congress behind closed doors, so the exact nature of what he said is unknown.

Of course Republicans and Democrats are fighting about the veracity of Campbell testimony. Republicans want to use Campbell’s account “to expand their investigations beyond the 2016 election and Trump to possible questions about Russian graft during the Obama administration.” The GOP Congressmen point out that the FBI found Campbell’s undercover work good enough to reward him with a $50,000 check in 2016.

As one would expect the Democrats don’t see it that way:

In a letter sent this week, Rep. Elijah Cummings (Md.), the top Democrat on the House Oversight and Government Reform Committee, and Rep. Adam Schiff (Calif.), the top Democrat on the House Intelligence Committee, asserted that Justice Department officials told both parties during a briefing in December that they ultimately found they “could not trust” Campbell when he was working as a FBI informant.

The Democrats add that according to Justice officials Campbell had at no point made “any allegations of corruption, illegality, or impropriety on Clinton, the Clinton Foundation, President Clinton, the Uranium One deal, or CFIUS,” according to the Democrats”They also confirmed that there were “no allegations of impropriety or illegality” regarding Secretary Clinton in any of the documents they reviewed,” the Democrats said.

Based on how Schiff has acted during the Russian investigation, and Cummings during the Benghazi investigation, I wouldn’t believe their claims unless I heard them from the FBI and Dept. of Justice, with my own two ears with these two political swamp dwellers in a different room.

Campbell believes that the stories of eche of he aforementioned congressmen are nothing but a load of horse-Schiff.

“My FBI handlers praised my work.  They told me on various occasions that details from the undercover probe had been briefed directly to FBI top officials.  On two occasions my handlers were particularly excited, claiming that my undercover work had been briefed to President Obama as part of his daily presidential briefing,” he testified

But Campbell grew upset that the Obama administration played so “nicey-nicey” with the Russia  nuclear industry when the evidence of wrongdoing and ill intent was so extensive.

“I was frustrated watching the U.S. government make numerous decisions benefiting Rosatom and Tenex while those entities were engaged in serious criminal conduct on U.S. soil,” he testified. “Tenex and Rosatom were raking in billions of U.S. dollars by signing contracts with American nuclear utility clients at the same time they were indulging in extortion by using threats to get bribes and kickbacks, with a portion going to Russia for high-ranking officials.”

He said he never got a satisfactory answer from the FBI.

“I remember one response I got from an agent when I asked how it was possible CFIUS would approve the Uranium One sale when the FBI could prove Rosatom was engaged in criminal conduct.  His answer: ‘Ask your politics,’ ” Campbell said.

Since the oral part of Campbell’s testimony was behind closed doors we can’t know the full extent of his testimony. But in this case the if seems as if Republicans are correctd, thee is more than enough in what we know about Douglas Campbell’s testimony to insist that the Russian manipulation of Hillary Clinton may have allowed Uranium One to be part of Russia’s uranium dominance strategy.”And dominate the US’s uranium needs.

Wednesday, Mr. Campbell’s atttorney Victoria Toensing was on Hannity discussing the case, watch her appearance on the video below: