Uranium One FBI Informant Is Revealed: Will Testify, Provide Evidence 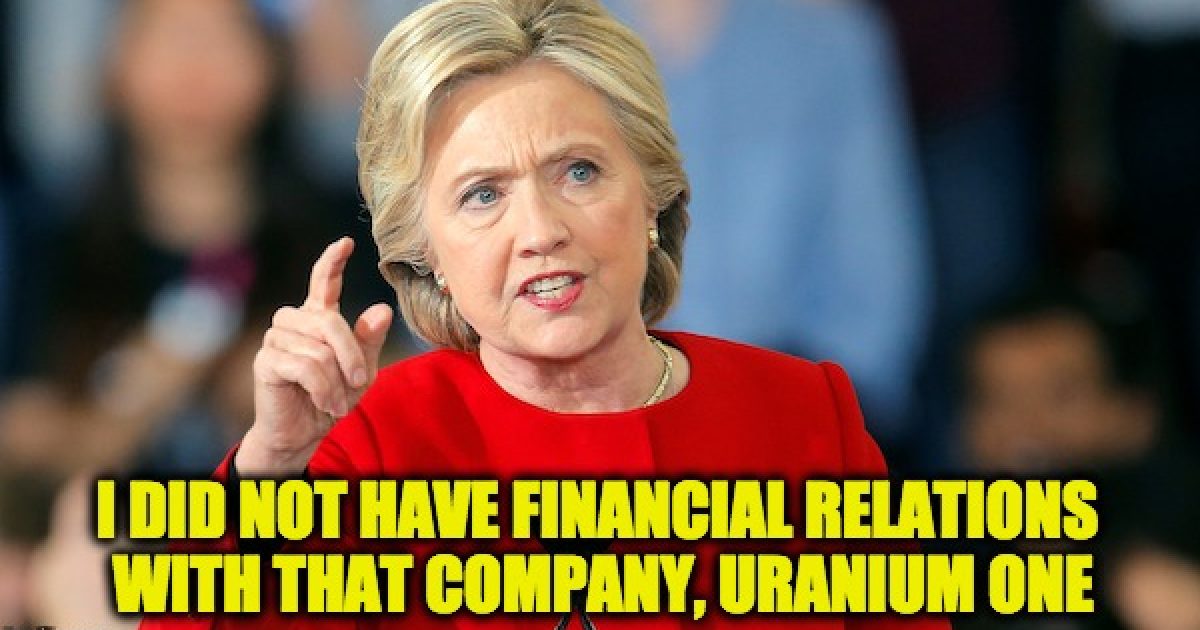 The former federal informant who knew about political influence and the Uranium One deal and whose silence was demanded by the Loretta Lynch-run DOJ has been identified by Reuters as an ex-lobbyist for a Russian firm.

The former lobbyist, William D. Campbell, was interviewed by Reuters and admitted that he’s the secret witness in the investigation into the 2010 sale of a uranium company to Russia’s Rosatom. Mr.Campbell  told Reuters that he will testify and provide documents to Congress about the Obama Administration’s 2010 approval of the sale of Uranium One, a Canadian company with uranium mines in the United States, to Russia’s Rosatom.

This story started with a bombshell of a story The Hill published in mid-October that connected Russian bribery, collusion, the Clinton Foundation,  Uranium and tons of cash, all before the 2010 Uranium One Deal outlined in Peter Schweizer’s book, Clinton Cash (which if you haven’t read yet…come on get with it).

That Hill revealed that in 2009 the year before Team Obama approved the Uranium One, the FBI compiled significant evidence that Putin’s nuclear industry officials “were engaged in bribery, kickbacks, extortion and money laundering designed to grow Vladimir Putin’s atomic energy business inside the United States, according to government documents and interviews.”

The Hill reported that Feds had a mole inside Russia’s nuclear industry, now identified as William D. Campbell, who gathered, “extensive financial records, made secret recordings and intercepted emails.” Apparently, that evidence proves Putin’s people had bribed their way into an American uranium trucking firm, which of course is against the law (it’s called the foreign corrupt practices act which makes one wonder why Justin Bieber is still in the country).

According to the Hill’s sources, Mr. Campbell provided evidentiary support to The Feds that the Russian nuclear team  “routed millions of dollars to the U.S., designed to benefit former President Bill Clinton’s charitable foundation during the time Secretary of State Hillary Clinton served on a government body that provided a favorable decision to Moscow” in the Uranium One deal.”

Since that report, Jeff Sessions’ DOJ has partially lifted the informant’s gag order, giving him permission to speak to members of Congress and their staff.

Speaking to Laura Ingraham on Wednesday, Peter Schweizer provided a bit more evidence regarding what the Mr. Campbell gave to the Justice Department in 2009:

We know for a fact the FBI has in its possession another tape an audio tape that was basically recorded by this FBI informant that’s going to be coming forward.  I have not heard the tape but I’ve heard about the tape from people at the FBI and that audio tape apparently is Russian officials with this uranium company talking about making donations to the Clinton Foundation to gain favorable action. That tape was given to Department of Justice prosecutors. [Based on the tape] The FBI field office requested the ability to wiretap and to survey the Clinton Foundation. The Obama Justice Department came back and said no not enough evidence.

In other words, the Obama DOJ was covering for the Clintons.

According to the Reuters report:

At the time of the sale, Campbell was a confidential source for the FBI in a Maryland bribery and kickback investigation of the head of a U.S. unit of Rosatom, the Russian state-owned nuclear power company. Campbell was identified as an FBI informant by prosecutors in open court and by himself in a publicly available lawsuit, he filed last year.

In a telephone interview, Campbell said he wanted to testify because of his concerns about Russia’s activities in the United States, but declined to comment further.

Campbell’s lawyer, Victoria Toensing, who has not previously identified her client, said despite Campbell telling the government ”how corrupt the company was,” Rosatom still got permission to buy Uranium One. She did not say what Campbell would reveal regarding any alleged wrongdoing by Clinton.

(…) “I have worked with the Justice Department undercover for several years, and documentation relating to Uranium One and political influence does exist and I have it,” Campbell said. He declined to give details of those documents.

Reuters was unable to learn when the closed-door testimony has been scheduled.