FBI Informant Told Uranium One Deal Went Through Because Of Politics 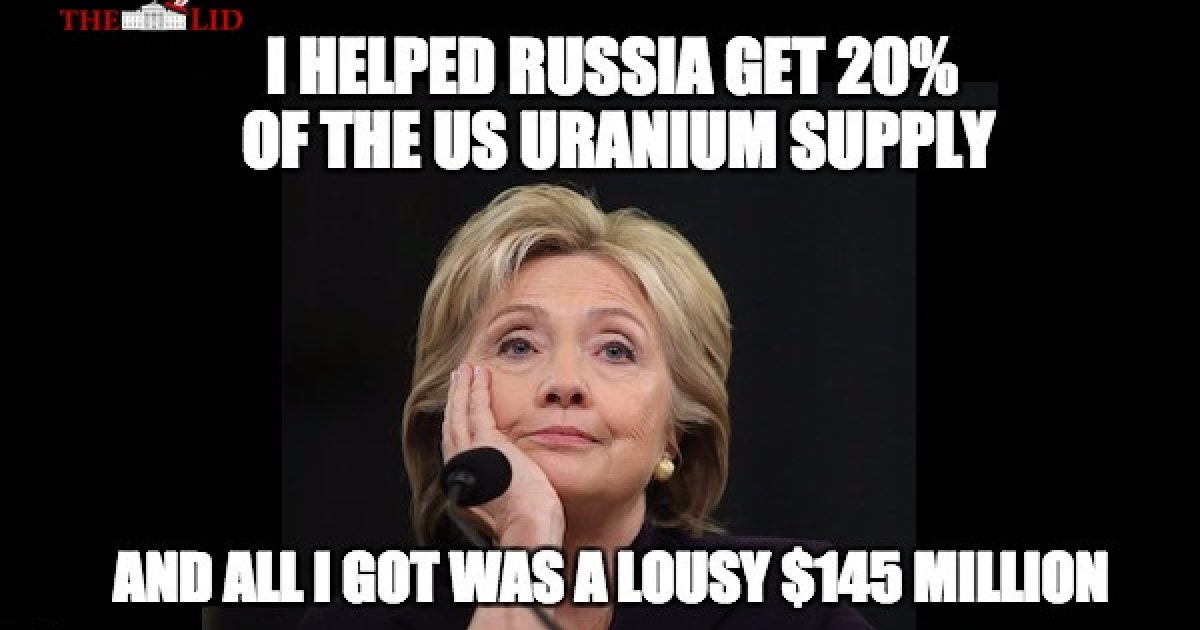 William Campbell worked as an FBI informant in the Russian Nuclear business for six years, well before the Uranium One sale. He compiled over 5,000 documents which he shared with The Hill and when he questioned his FBI handler how the Uranium One sale could be approved after all the information he supplied, Campbell was told the deal went through because of politics.

The evidence Mr. Campbell gave the FBI prove the of Uranium One deal was seen by Russia and its American consultants as part of their strategy to corner the uranium market worldwide. Among other things the Russias wanted the United States to need the Russians for its uranium needs.

Campbell as even asked to help the Russian nuclear firm, Rosatam overcome the political opposition building about the sale:

Campbell documented for his FBI handlers the first illegal activity by Russians nuclear industry officials in fall 2009, nearly an entire year before the Russian state-owned Rosatom nuclear firm won Obama administration approval for the Uranium One deal, the memos show.

Campbell, who was paid $50,000 a month to consult for the firm, was solicited by Rosatom colleagues to help overcome political opposition to the Uranium One purchase while collecting FBI evidence that the sale was part of a larger effort by Moscow to make the U.S. more dependent on Russian uranium, contemporaneous emails and memos show.

“The attached article is of interest as I believe it highlights the ongoing resolve in Russia to gradually and systematically acquire and control global energy resources,” Rod Fisk, an American contractor working for the Russians, wrote in a June 24, 2010 email to Campbell.

In a previous revelation, we learned that Fisk ran the trucking firm that moved uranium across the United States and who (according to court papers) was on the Russian payroll.

The email forwarded an article on Rosatom’s efforts to buy Uranium One through its ARMZ subsidiary. Fisk also related information from a conversation with the Canadian executives of the mining firm about their discomfort with the impending sale.

“I spoke with a senior Uranium One Executive,” Fisk wrote Campbell, detailing his personal history with some of the company’s figures. “He said that corporate Management was not even told before the announcement [of the sale] was made.

“There are a lot of concerns,” Fisk added, predicting the Canadians would exit the company with buyouts once the Russians took control. Fisk added the premium price the Russians were paying to buy a mining firm that in 2010 controlled about 20 percent of America’s uranium production seemed “strange.”

At the time, Campell was working alongside Fisk as an American consultant to Rosatom’s commercial sales arm Tenex.

A year before the Committee on Foreign Investment in the United States  (CFIUS) voted on the Uranium One deal, Campbell provided the FBI with evidence of bribery & kickbacks regarding Russia and the Uranium market.

“There is zero doubt we had evidence of criminal activity before the CFIUS approval, and that Justice knew about it through NSD [the natural security division],” said a source with direct knowledge of the investigation.

And part of the activity involved the Clintons:

Campbell’s debriefing files also show he regularly mentioned to FBI agents in 2010 a Washington entity with close ties to Bill and Hillary Clinton that was being paid millions to help expand Tenex’s business in the United States. The entity began increasing its financial support to a Clinton charitable project after it was hired by the Russians, according to the documents.

Campbell engaged in conversations with his Russian colleagues about the efforts of the Washington entity and others to gain influence with the Clintons and the Obama administration. He also listened as visiting Russians used racially tinged insults to boast about how easy they found it to win uranium business under Obama, according to a source familiar with Campbell’s planned testimony to Congress.

With all the evidence of corruption and Russia’s nefarious intentions, why did the CFIUS approve the deal? Mr. Campbell confronted his FBI handler with that question. The agent’s response suggested that “politics” was involved.

Followers of the Obama administration know that many of that president’s decisions had more to do with politics than sound policy. For example, the Iran deal was made to give Barack Obama a political foreign policy legacy.

Oh, and after the deal was done about a quarter of the Uranium One’s product was shipped out of the country.

The Nuclear Regulatory Commission (NRC) approved an export license for a third party trucking firm to export Uranium One ore to Canada for enrichment, and that some of that uranium ended up in Europe, NRC memos show. Uranium One itself admits that as much as 25 percent of the uranium it exported to Canada ended up with European or Asian clients through what is know in the industry as “book transfers.”

But please don’t tell the above the Fox’s Shepard Smith, he hates facts.

This deal stinks! There is no other way to put it. It is time for the Attorney General to suck it up and lead an investigation into the bribery, kickbacks, and politics, that seem to be behind the Uranium One deal.

There is more in the latest Hill story about the Uranium One deal. It can be read here.