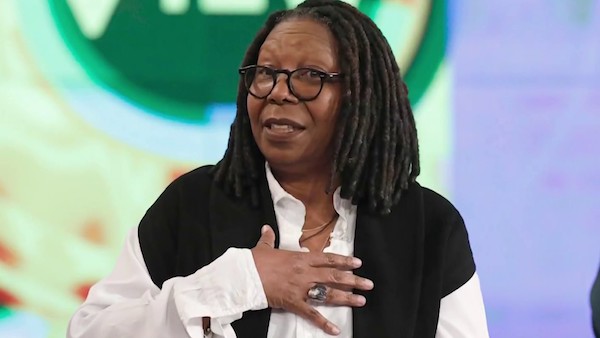 On the last day of January 2022, Whoopi Goldberg said something so stupid that one has to believe her IQ was lower than a piece of paper. Trying to minimalize the Holocaust, the bigot who took the Jewish name for the stage basically classified the Holocaust as a white-on-white crime, and it had nothing to do with race. . What she was implying is that Jews were not the victims of the Holocaust. It was just a war between Jews and Nazis. After all, Jews could not be victims because they were just another kind of caucasian.

To celebrate Chanukkah in 2022, Whoopi doubled down on her stupidity about the Holocaust.

Whoopi Goldberg is a stage name. Her birth name is Caryn Elaine Johnson – in other words, despite using the stage name Goldberg she isn’t, nor has she ever been, Jewish. Besides being hurtful to people whose families suffered through the Holocaust, because of her last name, people believe her imbecilic remarks were made by a Jew.

During Chanukah in 2022, the non-Jewish Goldberg decided to go after Holocaust victims again:

She argued that the white complexion of European Jews meant that the Nazis were not persecuted because of a racial factor.

Technically the Jewish people are a nation, not a race. However, the Holocaust was racial because the Nazi criminals thought the Jews were a race. Ms. Johnson, one of the reasons that Hitler went after the Jews was that he wanted to create an Aryan race. Whenever he bloviated about Jews, he said that the Jews were an inferior race.

“You could not tell a Jew on a street. You could find me. You couldn’t find them. That was the point I was making. But you would have thought that I’d taken a big old stinky dump on the table, butt naked,” Goldberg said.

Whoopi, if you ever took a big old stinky dump on the table, butt naked on TV, I would throw my TV out the window. But first, I would poke my eyes out so I never see anything like that ever again.

I agree that, in most cases, it is impossible to identify a Jew in the street. The Nazis were more intelligent than that. They used paper records and local knowledge, such as Jewish community member lists, parish records of Protestant and Catholic churches (for converted Jews), government tax records, passports, and police records, all to identify Jews so they could be rounded up and killed. There were also some neighbors who told the Nazis there were Jews in the house down the street.

Whoopi cannot understand that the Holocaust is unique in its volume and horrors. It is a singular event in world history. Yes, there are genocides of other people and other horrors. There were even other atrocities committed against the Jewish nation. Generally, genocide is waged to suppress a group and take their territory for political or economic reasons like taking their wealth or enslaving a people. This was different– the Jews targeted by Hitler and the Nazis had no land and held relatively little power. The Nazis who were engaged in the genocide of Jews had only one purpose, to wipe Jews off the face of the Earth.

The protests about Whoopi’s latest comments about the Holocaust grew so loud that she apologized on Dec. 27. As reported by the NY Post:

In her new statement, she attempted to clarify that she was simply referencing her past hurtful remarks, not “doubling down” on them.

“Recently while doing press in London, I was asked about my comments from earlier this year. I tried to convey to the reporter what I had said and why, and attempted to recount that time,” Goldberg began. “It was never my intention to appear as if I was doubling down on hurtful comments, especially after talking with and hearing people like rabbis and old and new friends weighing in.

“I’m still learning a lot and believe me, I heard everything everyone said to me. I believe that the Holocaust was about race, and I am still as sorry now as I was then that I upset, hurt and angered people. My sincere apologies again, especially to everyone who thought this was a fresh rehash of the subject. I promise it was not.

“In this time of rising antisemitism, I want to be very clear when I say that I always stood with the Jewish people and always will. My support for them has not wavered and never will,” she ended.

I hope ABC doesn’t fire her from The View. That will make her a martyr, and she doesn’t deserve to have people feel bad for her. And who knows? Maybe this time, she really is contrite. As she continues her career, we will find out.

My Friends at Clash Daily also covered the Whoopi idiocy but from the perspective of the Auschwitz Memorial. It’s worth your time to give it a read by clicking here.