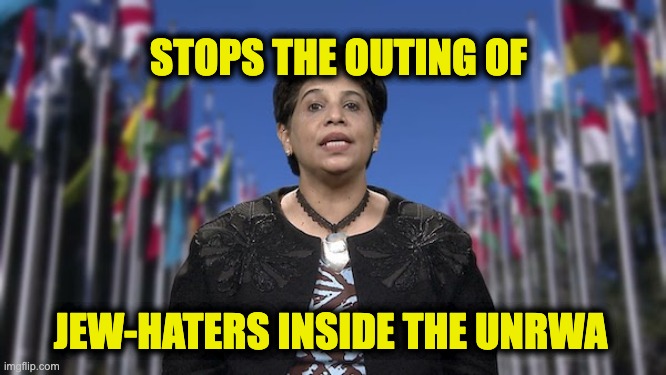 For years, the UN has been sitting on its petards, trying to define terrorism so they can then call it a crime against humanity. What the United Nations has been missing this whole time is all they had to do is click their heels together three times and say, “there’s no place like home.” That’s because one of their own organizations, the United Nations Relief and Works Agency (UNRWA), is a classic example of a terrorist, anti-Semitic operation. During Israel’s conflicts with Hamas in Gaza, for example, the UNRWA has allowed its schools, hospitals, and offices to be used as bases for firing rockets and mortars at Israeli soldiers while allowing the teachers at its schools to educate Palestinian children to hate Jews and Israel. UNRWA Antisemitism

Ironically the UN, which was created out of the embers of the Holocaust, is trying to suppress reports of anti-Jewish hatred being spewed by employees of the UN organization for refugees, the UNRWA,

Via video, Hillel Neuer from UN Watch, an accredited United Nations NGO, was presenting to the UN Human Rights Council the results of a study it conducted about teachers and staff working at schools run by the UNRWA.  The study revealed some of those UNRWA school employees are promoting anti-Jewish hatred. (the full report is embedded below).

Entitled “Beyond the Textbooks,” the UN Watch document identified 100 UNRWA educators and staff who have publicly promoted violence and Antisemitism on social media. It highlights explicitly “22 recent cases of UNRWA staff incitement which clearly violates the agency’s own rules as well as its proclaimed values of zero tolerance for racism, discrimination or antisemitism.”

“As revealed in the report, UNRWA staff stationed in Gaza, the West Bank, Lebanon, Syria, and Jordan have publicly incited antisemitism and terrorism. Among the educators who have used their personal social media channels for such propaganda is UNRWA Gaza math teacher Nahid Sharawi, who shared a video of Adolf Hitler with inspirational quotes to “enrich and enlighten your thoughts and minds.” A UNRWA teacher in the West Bank, Husni Masri, posted antisemitic conspiracy theories according to which Jews control the world, created the coronavirus, and seek to destroy Islam.”

Wow, Jews do all that? Damn, we’re good!

About 30 seconds after Hillel’s Neuer’s video presentation began, UN Human Rights Council President, Nazhat Shameem Khan (from Fiji), stopped the video. She claimed that the report contained unacceptable “personal attacks, and ruled his statement “out of order.” As you can see in this video, all he was doing was repeating the words of the Jew-hating teachers.

Previous reports by other organizations have exposed the hatred taught to children via textbooks used at UNRWA schools. A 2020 report by the Center For Near East Policy Research revealed:

Dr. Arnon Groiss, retired deputy director of the Arab Language Division of the Israel Broadcasting Service, who holds a Ph.D. in Islamic Studies from Princeton, directs the project to examine all UNRWA textbooks for 21 years​and ​ concludes that UNRWA school books can be summarized as:

“Palestine is Arab and Muslim” reads the heading of Lesson 2, with an adjoined map of the Arab homeland replacing Israel with Palestine, under​ the Palestinian flag, in a “National and Social Upbringing” textbook for grade 4, semester 1, page 8.

The book was issued by the Palestinian Authority in 2020, and it is in use in​ ​UNRWA schools.

So if there is so much evidence, why was Hillel Neuer cut off? After all, the UN Watch report has already prompted UNRWA investigations — and, according to Al Jazeera, some suspensions.

The reason is that the UN Human Rights Council (UNHRC) is the most anti-Semitic/anti-Israel organization in the United Nations. Every meeting of the Human Rights Council requires a debate about supposed Israeli human rights abuses against the Palestinians. Called Agenda item 7, the debates routinely feature Iran, Syria, North Korea, and dozens of other terror-supporting states accusing Israel of numerous crimes and human rights violations. At the same time, they ignore the region’s actual human rights violators like Hamas, Islamic Jihad, the Palestinian Authority, Iran.”

In a 2017 speech to the UNHRC, then Vice President Pence scolded the council for its biased and ugly treatment of Israel.

That same year Great Britain put the UNHRC on notice about its constant unfounded criticism of the Jewish State. It released a statement “announcing that it would vote against all future UNHRC resolutions criticizing Israel until the body ends its “disproportion and bias” against Israel. Saying in part:

“Israel is a population of eight million in a world of seven billion, Yet since its foundation, the Human Rights Council has adopted 135 country-specific resolutions; 68 of which against Israel. Justice is blind and impartial. This selective focus on Israel is neither,” added the statement, which pointed out that “Israel is the only country permanently on the Human Rights Council’s agenda.”

Now think about that for a moment, Syria used chemical weapons against their own people, Iraq used it against the Kurds, Putin murders his opponents, Cuba, North Korea, China, and others arrest and murder political opponents, many of the Arab States execute gays and other “infidels,” etc., etc., but 50% of the UNHRC’s actions have been directed at the only Jewish State in the world and the only democracy in the Middle East.

The problem of the UN Relief and Works Agency goes way beyond its teaching of hate. For example, in 2014, three IDF soldiers were killed, and 15 others were wounded while trying to safeguard what they thought was a UNRWA clinic while their unit was destroying a terror tunnel. The Tunnel itself was built inside the medical clinic, and the UNRWA clinic was booby-trapped just for that reason.

The clinic was just one example of the UNRWA facilities being used as death traps in Gaza. During the 2014 Israeli war with Hamas,  three of the Agency’s schools were revealed as weapons storage facilities for Hamas and allied terrorists. Those and other UNRWA schools were used as “human shields,” protecting Hamas terrorists as they hid behind the schools.

In April, despite the hatred coming from the UNRWA, the Biden administration said it plans to provide $235 million to Palestinians. That money was originally cut by Donald Trump because it was used as blood money to reward terrorists. The administration announced two-thirds of the restored money would go to the UNRWA, which suffered a financial crisis since President Trump recognized the organization was spreading hate and pulled UNRWA funding.

With the restoration of funding, President Biden sent a dangerous message to the world: Antisemitism and anti-Israelism is perfectly fine even when it comes from an organization supposedly promoting peace. When it cut off Hillel Neuer, the UNHRC indicated that it heard Biden’s message loud and clear.

While Hillel Neuer was being censored at the Human Rights Council meeting in Geneva, a similar incident happened in NYC at the UN General assembly. The Israeli Ambassador to the UN  was prevented from even bringing the chart he was going to present when going into the Assembly meeting. That incident was covered by my friends at Clash Daily. I recommend you read about that censorship by clicking here.

Below is the full UN Watch report:  UNRWA Antisemitism