Daddy On The Unemployment Line

All of my life I have known exactly what I want to do next. Being laid off has left me confused and dazed. 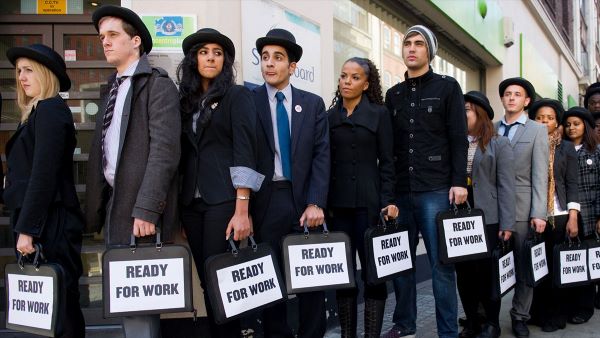 After 9/11 ad revenue dried up and at MTV Networks there were major layoffs. Not just the junior people, but every Senior Vice President had to lay off a Vice President. Therefore even though as the publisher I had lead Nickelodeon Magazine to a place on Adweek’s Hottest Magazine list twice during my three-year tenure, I was laid off. Despite the fact I still consider Nickelodeon the best job I ever… I learned so much during my time out of work.  As the number of people furloughed or laid off from their jobs has spiked so high since CoronaVirus forced much of America to stay at home and the unemployment numbers to be released at the end of this week are going to be shocking– perhaps some would find solace in my first and most emotional experience on the unemployment line. Because there is a light at the end of the tunnel.

There were boxes everywhere, all filled with the tchach’kes that gave my office its personality. All the family pictures were wrapped in bubble paper and packed away. From time to time the phone would ring again, or somebody would call – I’d cry, they would cry, and then I would awkwardly get them change the topic. Since my boss told me the day before that I was getting laid off from the best job I had ever had, publisher of a popular children’s magazine, my crying wouldn’t stop. And now – almost a full day later – I was exhausted from the crying.

First things first, I had to tell my family. I called my wife Lois as soon as I was told. She told me how much she loved me and how talented I was. She told me what a great job I had done – reminding me that just this past March the magazine had won awards for the job I did. In February the president of my division had introduced me to the chairman of the parent corporation, telling him what a great job I was doing. She kept telling me that there were 500 other senior people that got laid off, so it had nothing to do with me. Consciously I heard her and believed her – but I didn’t really. My wife loved me and she had to say that.

My parents always taught me that if you work hard and do a good job, things would work out. My parents wouldn’t lie. Now I was getting laid off from a job that I worked very hard at and won recognition for – so I must have done something very wrong. Even if I hadn’t done something wrong, I was a failure; I was out of work and couldn’t provide for my family. It didn’t matter that my wife had her own business and we could live on that income. I am the father, and I don’t have a job, so I must be a loser.

I was worried about telling my kids. They loved having a daddy who worked for the leading kid’s entertainment company even more than I enjoyed working there. Much to my relief, they took it in stride. My daughter gave me a hug and went back to her homework, my son gave me a confused look and then asked if he could go back to his Nintendo. So much for the Robert Young, “Father Knows Best” approach.

My brother and sister were very supportive but I couldn’t tell my parents yet because my last day at work was my dad’s birthday, and my mom was about to go for a follow-up doctor’s appointment for the heart surgery the week before. Eventually, when my mother got then news, she asked me, crying, “Is there anything I can do? Do you need anything?”

The first week of unemployment was a blur. I remember going to shul one day that first week. I get real comfort from the davening – a feeling like whatever happens at least I have God pulling for me.

Another reason I went to minyan is to see my extended family, the folks at the shul. They have shown me the meaning of the term “Children of Israel.” As I have become more observant over the past few years, I have learned that Judaism is more than just a religion or even a nation. What has really kept us going over these last few thousand years is that we are family, cousins, all descended from 12 brothers. When the chips are down, we stop everything and act like a family should. Everyone wanted to help however they could.

Through it all my public face was positive. I told them all not to worry, and “Hey, it’s a good thing maybe now I can get to morning minyan.”

But I was very sad. I wanted to work, I wanted to be productive, and I didn’t want just another job – I wanted MY job. I always said that if I ever left the company they would have to throw me out. Well, they did.

When I left my job, the management asked me to sign a separation agreement. I took it home and gave it to my wife (who is a wonder at details) to look it over before I signed. I wanted to sign it right away, subconsciously thinking that if I signed it fast, they would call me, forgive and let me have my job back.

Lois said that the document was a lot of legalese, which essentially said they would honor my contract, and in turn, I would promise never to sue or speak badly about the company. In the meantime, I left it unsigned.

I get calls and e-mails from people whose paths I crossed over my 21 years in the industry, many of whom I hadn’t heard from in years. They call to give a job lead, share a joke, or just to give a message of encouragement. Lois tells me that I get those calls because I always made them and people remember. Whatever the reason, if you know somebody out of work – call him or her today. The calls are very comforting.

I came home one day and found a big box waiting at the front door. I opened it up and found a brand new putter (I play golf every Sunday during the summer). Attached to the putter was a note from my old boss. The letter thanked me for my hard work and passion, and that he attributed much of the success of the magazine to my leadership. At first, I was angry. If I was so good, why am I out of work? After a while I did calm down – he had only good intentions in sending me the gift.

Around Thanksgiving, my son’s class had to answer a question, “What are you the most thankful for?” Perry answered, “I am thankful that my dad is out of work. Now he can play with me when I get home from school.”

He’s right. I got to watch my 7-year-old son take his test for a yellow belt in Karate or watch my 11-year-old daughter ride horses – none of which I would have been able to do if I was working at my old job. And now I get many more hugs.

By mid-December, I had seen every recruiter in my industry. They all told me that I have a great reputation and an impressive resume; I will find something soon after the first of the year. Well guys, now it’s after the first. What’s going on? Why am I still here?

Everybody told me to settle into a routine, so I have. I help the kids get ready for school, job search until noon, then I go to the JCC where I spend an hour on the treadmill.

In the afternoons I go back to the job hunt until the kids come home.

And I do projects. I have cleaned out the garage, my home office, and the basement. I have brought my kid’s leftover toddler toys and books over to the shul’s nursery school. I rebuilt a computer for my son and one for my dad. I am doing stuff with the kids that I never have before – renting movies, building cars, and using power tools.

Last week I got a call from the president of my former employer. We always had a very nice relationship. When I heard his voice on the phone, I thought, “My boss must have gotten tired of doing both his job and mine, and now the president of the company was calling me to offer me my old job back.”

Well not quite. He called to see why I wasn’t signing the separation agreement. I felt awful. It reminded me of my adolescent days when you get a call from your ex-girlfriend and you think she’s calling because she missed you. But she’s really calling to find out where you got the sweater you gave her for her birthday so she can return it. I was very angry – not at him – but at myself for not being able to get over it and move on.

Though I still haven’t gotten a job, I believe that God answers all of my prayers. It’s just that sometimes the answer is “no” or “not now.” Maybe He has something else in store for me, or maybe He just wants me to spend some more time with my wife and kids. But He is listening. Hey, didn’t He just get the NY Mets a power hitter to bat behind Mike Piazza [Mo Vaughn]  something I prayed for all last summer?

I’ve had a lot of ups and downs over the last two months, periods of anger, frustration, determination, and resignation. Lois says I’m so talented and creative, and that I should find a new career. Every day she comes up with a new idea. The problem is that after two months of being unemployed, deep down, it is still hard to believe her. I still think that if I were so talented, I’d still be working.

As much as I would like to deny it, people are defined by their occupation. I was always introduced as Jeff who worked at the magazine, and before that, I was Jeff from the entertainment conglomerate. But it shouldn’t be like that. Joshua, who was Moses’ right-hand man and given the job by God to conquer the Holy Land, wasn’t known as Joshua the conqueror – he was simply Joshua the son of Nun. Joseph wasn’t called the ruler of Egypt – he was Joseph the Tzaddik.

Why can’t I be comfortable with Jeff the Dad, or Jeff son of Noach? I should be able to accept the fact that I am no longer Jeff the publisher, but there is a real high from being in the middle of the entertainment world. I still suffer from withdrawal – still crave that fast pace.

That is the most distressing part. All of my life I have known exactly what I want to do next. Every life choice, every career option was made quickly and with confidence. Being laid off has left me confused and dazed. I am not sure what to do next, and that is very stressful. I guess when the time is right, with God’s help, I’ll figure it out. The right door will materialize and I will walkthrough.

Note a few weeks after this was published I was hired by Marvel Comics. Originally published at AISH.com at the end of 2001.