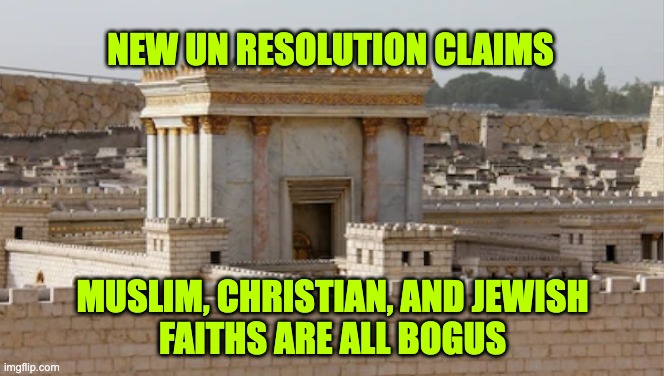 Once again, the United Nations has displayed its true colors as an Antisemitic and anti-Israel organization. On Wednesday, 129 countries voted in favor of a resolution (with 11 against and 31 abstentions) passed a resolution declaring Israel’s ‘proclamation of Jerusalem as “the capital of Israel,” were null and void and must be rescinded forthwith.’ Later in the resolution, it denied the Jewish people’s connection to the Temple mount by demanding that Israel should be “refraining from provocative actions and rhetoric and upholding unchanged the historic status quo at the Haram al-Sharif – in word and in practice, as well as for full respect for international law, including international human rights law and international humanitarian law, as may be applicable in Jerusalem.”

By calling the site Haram al-Sharif without mentioning that it is the Temple Mount and historically the home of the two Jewish Temples to God, most countries that voted to pass or abstain from the resolution were denying their own faiths. The written history and scripture of the  Muslim, Christian, and Jewish faiths all say that Jerusalem and the Temple Mount belong to the Jewish people.

Let’s start out with the basics.  Jerusalem was NEVER part of a Palestinian State because there was never an independent state of Palestine. After the Bar Kochba revolt in 135 CE, the Romans punished the Judeans (Jews) for revolting a second time in sixty years. They changed the country’s name from Judea to Syria Palaestina (after the ancient enemy of the Jews, the Philistines. The Philistines were destroyed about a thousand years before Rome changed the name). At the same time, the Romans changed the name of the holy city and Judea’s capital from Jerusalem to Aelia Capitolina (literally Capitoline Hill of the House of Aelius). After the Romans threw out many Jews, the holy land was ruled by the Byzantine Empire, the Ottoman Empire, and finally, the British mandate before it became a Jewish State in 1948.

From The Second Temple, Warning In Greek delineating a section of the Temple complex was off-limits to Gentiles.

An earlier capture of Jerusalem by the Greek-Egyptian King Ptolemy, son of Lagus, provided an opportunity for the obscure Agatharchides of Cnidus (second century BCE) to remark that the people of Jerusalem, who inhabited the most strongly fortified of cities, lost their city because they would not defend it on the Sabbath.

The Palestinians point to the fact that there is little archeological evidence that either Temple existed, which ignores the very convenient fact that there is no digging allowed on the Temple Mount because the Government of Israel tries to recognize its holiness to the Muslims. But when the Muslims dug up part of the Temple Mount to add to their Mosque, they dumped the tons of dirt with artifacts outside the holy city.

Archeologists have been sifting through the dirt for years (the project is s called the Temple Mount Sifting Project) and have found artifacts from the Holy Temples. For example, in 2005, an archaeologist found what is now known as the Gaalyahu Seal, which in Hebrew says belonging to Gaalyahu, son of Imer. The house of Imer was a well-known priestly family at the end of the First Temple period, roughly from around the 7th – 6th Centuries BCE.

This is the textual proof of the isra’, the earthly segment of the Night Journey of the Prophet Muhammad: overnight, Muhammad was miraculously transported, round-trip, from “the Sacred Mosque” (al-Masjid al-Haram)-that is, the Ka’ba (or its vicinity) in Mecca-to “the Farthest Mosque” (al-Masjid al-Aqsa).

Later Muslim tradition came to identify “the Farthest Mosque” with Jerusalem. But during Muhammad’s lifetime, no mosque stood in Jerusalem; the Muslims conquered the city only several years after his death. Abdullah Yusuf Ali’s commentary on this verse summarizes the traditional explanation: “The Farthest Mosque,” he writes, “must refer to the site of the Temple of Solomon in Jerusalem on the hill of Moriah.“

This Koranic passage appears to show that the holiness of Jerusalem is a Jewish concept and should not be confused with an Islamic concept, as the 13th-century Arab biographer and geographer Yakut noted: “Mecca is holy to Muslims, and Jerusalem to the Jews.”

The Official 1925 Supreme Moslem Council (Wakf) Guide Book To Al-Ḥaram Al-Sarif (Temple Mount) recognized the presence of the Jewish Temples atop the Mount.  Shown below is paragraph two, which appears on page four, which says, “It’s [the Temple Mount] identity with the site of Solomon’s Temple is beyond dispute.” After Israel became a state in 1948, the Waqf removed from its guidebooks all references to King Solomon’s Temple, whose location at the site it had previously said was “beyond dispute.”

Thus there is indisputable proof that before it became a Palestinian strategy to deny the Jewish heritage with the Temple Mount and Jerusalem, the followers of the Muslim faith believed they were Jewish sites,

Some writers recall distinctive Jewish customs, such as the absence of idols, male circumcision, dietary laws, and the observance of the weekly day of rest, the Sabbath. Indeed, in 167 BCE, the Greek Seleucid King Antiochus IV ordered Jews to place an idol of Zeus in the Temple, outlawed circumcision, demanded the sacrifice of swine, and forbade Sabbath observance. I Maccabees 1:41-50 reads.” He thus desired to eliminate those unique features of the Jewish religion, noted by pagan writers. The books of Maccabees which tell the story of Hanukah and declare the holiness of the Jewish Temple atop Mount Moriah, are part of the religious scripture canon of the Greek Orthodox, Roman Catholic, Coptic, and Russian Orthodox churches.

The Jewish Temple in Jerusalem is mentioned in the Christian Gospels, which pre-date Islam. For example, in Mark 12:40 and Luke 20:47, Jesus accused the Temple authorities of thieving and named poor widows their victims, Providing written evidence of this in Mark 12:42 and Luke 21:2. Dove sellers were selling doves that were sacrificed by the poor who could not afford grander sacrifices and specifically by women.

According to Mark 11:16, Jesus then put an embargo on people carrying any merchandise through the Temple—a sanction that disrupted all commerce. In the Gospel of John 2:15-16, Jesus refers to the Jerusalem Temple as “my Father’s house,” thus, making a claim to being the Son of God.

What does this all mean?  Ancient Greek texts, Muslim texts, and Christian Gospels all agree with the Jewish scriptures that Jerusalem is a Jewish city, and there was a Jewish holy temple on top of Mount Moriah in Jerusalem.   No amount of lies from the Palestinians, the UN, or any country––no one except the Lord God himself, can take Jerusalem away from the Jewish people. But they keep on trying.

As Hillel Neuer, executive director of UN Watch, said, “The UN’s assault on Israel with a torrent of one-sided resolutions is surreal. “It’s absurd that in the year 2021, out of some 20 UN General Assembly resolutions that criticize countries, 70 percent are focused on one single country— Israel. What drives these lopsided condemnations is a powerful political agenda to demonize the Jewish state?”

The answer, Hillel, is the contempt those 129 nations have for the Jewish people and the Jewish nation of Israel. There is also blame that should be placed on the thirty-one cowardly countries which abstained. Many of the abstentions came from supposed allies of Israel, such as Great Britain. Britain and the other nations should learn from William Shakespeare, arguably the greatest playwright of all time. Shakespeare’s character Hamlet, from the play of the same name. Throughout the play, Hamlet is indecisive, including his most famous speech (to be or not to be…). His indecisiveness was a flaw creating many of Hamlet’s problems, including his death, as well as the death of most of the play’s central characters. What will the cowardly UN abstainers’ indecisiveness lead to?

Jeff Dunetz (The Lid) is on the national board of Herut, an international movement for Zionist pride and education dedicated to the ideals of the late Zionist leader Ze’ev Jabotinsky.  More about Herut can be found at www.HerutNA.org–Please consider joining me in Herut by clicking here