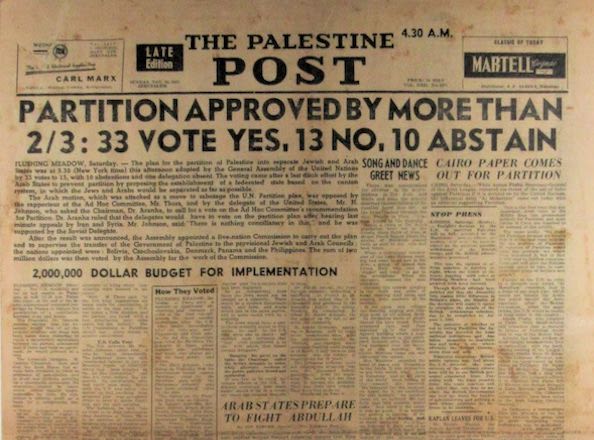 Seventy-Five years ago, the United Nations passed Resolution 181, which called for the partitioning of British-ruled Palestine into a Jewish state and an Arab state (back then, Jews living in the Holy Land were called Palestinians).

After 1,900 years of prayer, the Jewish nation again had a sovereign state in its eternal homeland.

After the Bar Kochba revolt in 135 CE, the Romans punished the Judeans (Jews) for revolting a second time in sixty years. They changed the name of the Judean country from Judea to Syria Palaestina after the ancient enemy of the Jews, the Philistines. The Philistines were destroyed about a thousand years before Rome, but hey used changed Judea’s name. At the same time, the Romans changed the name of Judea’s capital from Jerusalem to Aelia Capitolina (literally Capitoline Hill of the House of Aelius).

After Rome fell, the holy land was ruled by the Byzantine Empire, the Ottoman Empire, and finally, the British mandate before it once again became a Jewish State in 1948.

Jews worldwide cried with happiness and offered prayers of thanksgiving when Resolution 181 was approved on November 29, 1947, with 33 votes in favor, 13 against, 10 abstentions, and one absent (see the end of the post for who voted what). The original partition resolution passed by the UN in November 1947 did not call for establishing a state of Israel. It called for dividing Palestine into Independent Arab and Jewish States.

On that very same day, November 29, 1947, the Arab world declared war on the nascent Jewish State, and seventy-five years later, much of the Arab league still refuse to acknowledge the land to exist as a Jewish State.

As Israeli Prime Minister Netanyahu said in May 2009::

“Even as we look toward the horizon, we must be firmly connected to reality, to the truth. And the simple truth is that the root of the conflict was, and remains, the refusal to recognize the right of the Jewish people to a state of their own, in their historic homeland.

The attacks against us began in the 1920s, escalated into a comprehensive attack in 1948 with the declaration of Israel’s independence, continued with the fedayeen attacks.”

Despite what you may hear from the Anti-Israel mainstream media, the US/Israel relationship is not one-sided. Israel has been invaluable in the war against Islamist terrorism.

“Today, Israeli contributions to U.S. national interests cover a broad spectrum. Through joint training, exercises and exchanges on military doctrine, the United States has benefited in the areas of counter-terrorism, intelligence and experience in urban warfare. Increasingly, U.S. homeland security and military agencies are turning to Israeli technology to solve some of their most vexing technical and strategic problems.”

In fact, the Jewish State has not only aided the United States, but Israel has also contributed to the world. In the last 75 years, the UN’s decision to create a Jewish state has been overwhelmingly vindicated.

Israel is a model of democratic pluralism, economic growth, and human progress in a region plagued with religious extremism, tyranny, and economic stagnation.

The Jewish State has contributed to the global community in a myriad of ways, including an entrepreneurial social sector, a cutting-edge high-tech economy, new medical technology and pharmaceutical product solutions, and counter-terrorism. It has also generously offered its assistance to all countries in need.

The UN didn’t give the Jews the right to live in the holy land, nor did any country or land purchased by biblical heroes. The landlord was never the Arabs, and before the partition in 1947, there was never a state of Palestine.

Jews have lived in the Holy Land continuously for the past 3,500 years because of an unbreakable contract with the actual landlord.

The UN may have voted for partition, but they were simply acting as the agent of the Lord. He would have found another way if they didn’t pass that resolution. As Israel’s first prime minister David Ben Gurion once told CBS News, “In Israel, in order to be a realist, you must believe in miracles.”

There has been one constant since the exile from Judea in 135 CE, through UN 181, and even through today. A Jew can be a  proud citizen of a different country, but Israel will always be home.