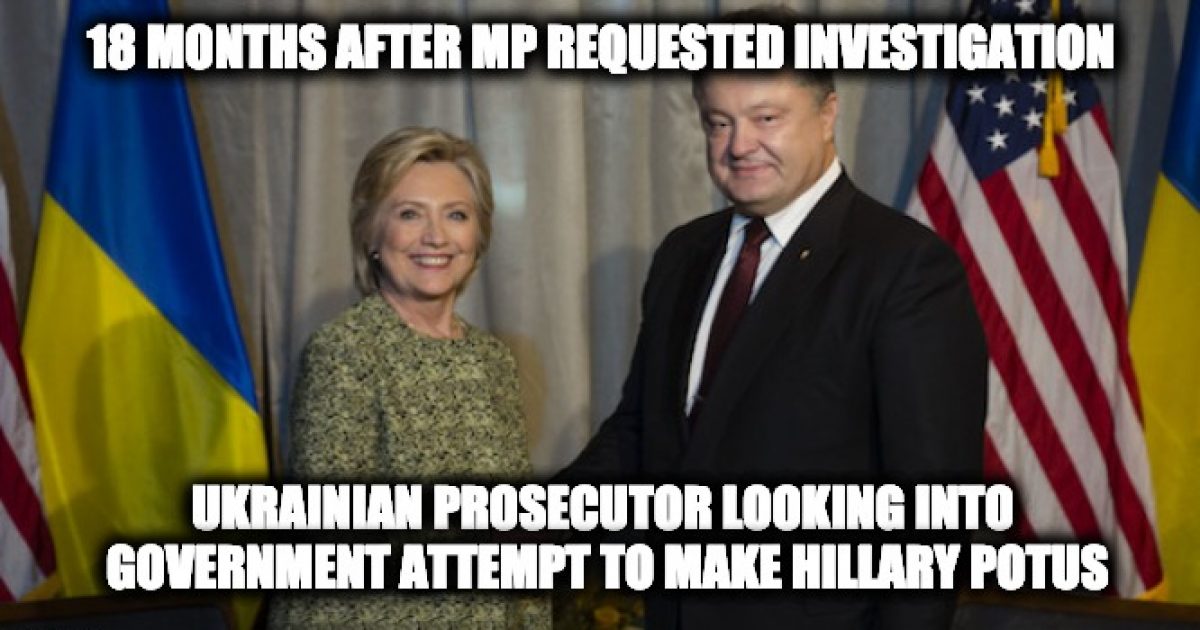 Ukrainian Prosecutor General Yuriy Lutsenko has finally opened a probe into alleged attempts by Ukranian politicians to help Hillary Clinton win the 2016 presidential election. While the Ukrainian/Hillary connection is not new (first reported on this site in July 2017 but ignored by the MSM), it’s good to see the prosecutor finally take action after the investigation was requested by a member of parliament a few weeks after the initial report.

Per John Solomon’s report in The Hill:

“Today we will launch a criminal investigation about this and we will give legal assessment ofthis information,” Lutsenko said last week.

Lutsenko is probing a claim from a member of the Ukrainian parliament that the director of the National Anti-Corruption Bureau of Ukraine (NABU), Artem Sytnyk, attempted to the benefit of the 2016 U.S. presidential election on behalf of Hillary Clinton.

(…) “According to the member of parliament of Ukraine, he got the court decision that the NABU official conducted an illegal intrusion into the American election campaign,” Lutsenko said.

“It means that we think Mr. Sytnyk, the NABU director, officially talked about criminal investigation with Mr. [Paul] Manafort, and at the same time, Mr. Sytnyk stressed that in such a way, he wanted to assist the campaign of Ms. Clinton,” he continued.

This is the second time they’ve gone after Sytnyk for a similar offense:

Director of the National Anti-corruption Bureau of Ukraine (NABU) Artem Sytnyk is facing criminal charges opened by the Specialized Anti-corruption Prosecutor’s Office (SAPO) on the fact of the possible disclosure of information amid a pretrial investigation. The case was opened after Infrastructure Minister Volodymyr Omelyan, who is suspected of illegal enrichment, alleged that Sytnyk had informed him about a planned raid on his house, SAPO s

Two years ago Politico reported about the Ukranian plot to make Hillary president:

Ukraine was also helping Hillary, and the Democrats launch the Russia witch hunt.

The Politico report identified  Ukrainian-American political operative Alexandra Chalupa, who was consulting for the Democratic National Committee as the contact to the Ukrainian officials.  Oksana Shulyar, one of Ukrainian Ambassador to the U.S. Valeriy Chaly’s top aides, was the point person on the foreign helping Hillary side.

A few weeks after the initial report,  Andrei Derkach, an independent member of the Ukrainian parliament sent a letter requesting that authorities launch a pretrial investigation into “illegal interference in the election of President of the United States organized by a criminal organization.” This organization, he said, consisted of senior members of the country’s National Anti-Corruption Bureau (Sytnyk?), government officials, and other public figures.

In his request to the prosecutor general — copies which he provided to POLITICO in the original Ukrainian and in English translation — Derkach claimed that the alleged meddling by Ukrainian officials created the impression that Kiev was an “unreliable and harmful partner” to Washington, resulted in a temporary freeze in contacts between the two and led to a reduction in U.S. financial assistance to Ukraine.

“Only a transparent and thorough investigation into the unlawful interference of Ukrainian officials with the U.S. election campaign can restore the trust of our strategic partner,” Derkach wrote.

By the time the Politico released the report, the Ukrainian government was scrambling to make nice with the new President-elect. Poroshenko was among the first foreign leaders to call to congratulate Trump.

Ukrainian efforts to sabotage Trump campaign – "quietly working to boost Clinton." So where is the investigation A.G. @seanhannity

During the transition, however, Trump officials treated the Ukraine outreach as if they had a disease. Indeed, those involved with repairing the relationship with the candidate they worked so hard to defeat, felt they were being ignored. But eventually, there was a thaw.

One thing both accounts agree on, someone in the Ukrainian government colluded with the Clinton campaign in an attempt to give Hillary the election.

In the eighteen months since Hillary’s collusion with Ukraine was first reported no one in the mainstream media picked up the story until John Solomon who has been so great at investigating and reporting the truth about the anti-Trump witch hunt the guts to talk about it today. The media’s too busy trying to prove the false story that President Trump colluded with the Russians to win the 2016 election to worry about a seemingly true Hillary story.

Makes one wonder when the Muller report comes out and says there was no Trump collusion. Perhaps they will accuse him of giving the Russkies some of America’s greatest secrets such as the ingredients to Colonel Sanders secret fried chicken recipe, or Coca-Cola’s long-guarded “secret formula” known as  “Merchandise 7X,” which is locked inside an Atlanta vault, or maybe even the missing egg salad recipe from the movie “What’s Up Tiger Lilly?”