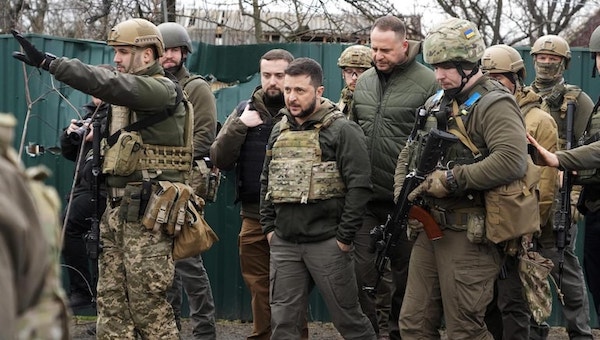 It may no longer be on the front page or lead the evening news, but it should.

During the past fortnight, Ukrainian troops have made monumental and perhaps unexpected gains against the Russian Armed Forces.

Following more than 200 days of war and occupation, Ukrainians are pushing Russian units out of the vital Kharkiv region and nearly back to pre-war borders.

Like any battle, the situation is fluid and, despite ignorant rants of “how long will it take?” the outcome is still to be determined.
But since their brazen and haphazard February invasion, Russia has suffered embarrassing failures, often due to antiquated military strategies, as they fought to push the Ukrainians out of contested provinces.
c

Until a month ago, Russian brutality had accomplished many of their aims, and they held 20 percent of Ukraine; it seemed like Vladimir Putin might yet win this illegal war, and Ukraine could be forced to the negotiating table as a European energy crisis set in.

Certain elite cable news hosts and their pro-Putin guests were joyous. And thankfully, they were quickly proven wrong.

Kyiv understood that the power balance was shifting in their favor, with Putin’s undisciplined troops wearing down mentally and physically and resorting to barbaric savagery.

Ukraine’s Prosecutor General’s Office reported on Sept. 17 that it has recorded 34,441 war crimes committed by the Russian military since the start of the full-scale invasion on Feb. 24.

On the other hand, Ukrainian forces supported by noble democratic nations were growing and gaining confidence.

The result has been catastrophic for Putin’s army.

Confronted by highly-motivated Ukrainians, poorly-led Russian soldiers fled, and the roads toward the eastern border are now littered with abandoned high-value equipment.

c
Last week alone, the Armed Forces of Ukraine regained hundreds of square miles of its own soil, while dozens of its towns were liberated.

His army is in crisis no matter what Putin claims to save face.

The Kremlin is running low on options. There is dissatisfaction among hawks. Like any dictatorial thug, Putin’s credibility rests on sophistry, propaganda, and faux poise.

Logistically and militarily, the path forward for the West and particularly the United States is straightforward:

Ignore isolationists on television and the campaign trail looking to score political points.
c
Continue, and even increase, support for brave Ukrainian soldiers who once again proved capable of taking the war to the larger enemy.

Be prepared for Moscow to target civilians.

Warn Putin that using tactical nuclear weapons is an imprudent gambit that would end any potential negotiations and result in an accompanying response too terrifying to ponder.

The Biden administration, which has often been reluctant and inconsistent, must remind shaky Europeans or U.S. politicians that they cannot allow a weakened Kremlin or propagandists to bully them into surrendering.

More than 50,000 Russian soldiers lay dead. They, and their totalitarian allies, are losing. A rogue China and other irredentist nations are watching and may take future lessons from the results.

Most importantly, the Ukrainian people have proved that they can win with critical western assistance.f