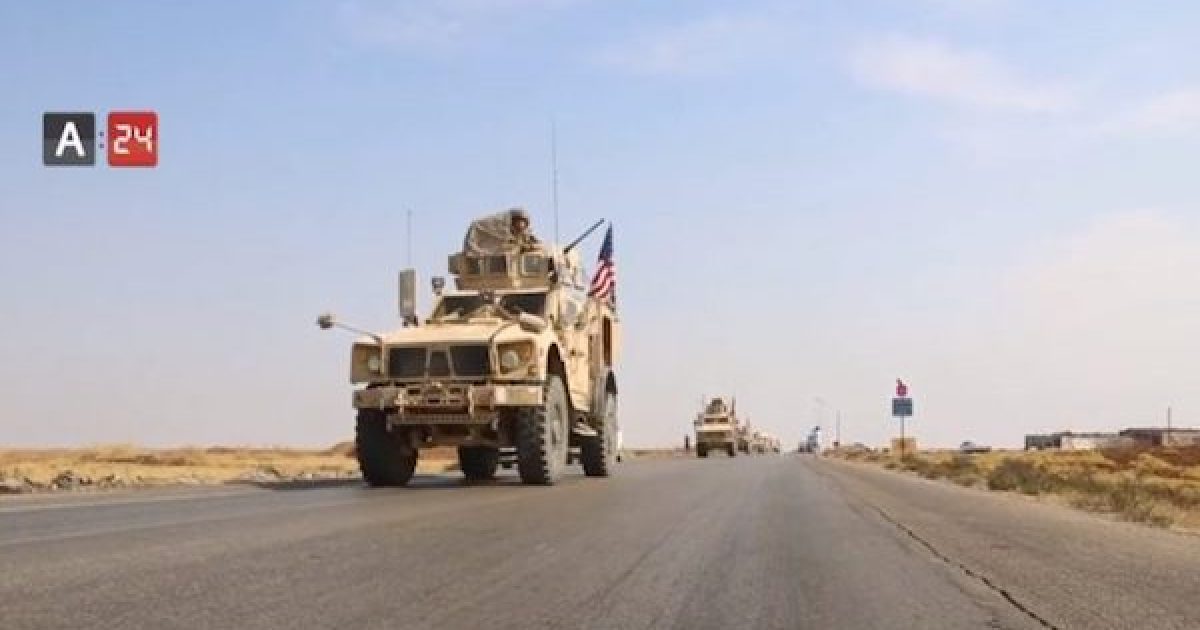 Last week, a series of reports indicated that the U.S. intends to move a relatively small contingent of armored force into Syria.  Although it ultimately wasn’t clear what the force would consist of, Abrams main battle tanks and armored personnel carriers (for mechanized infantry) were discussed.U.S. Syria

Shaking the various reports out, they seem to indicate a task-organized company-size contingent, likely to include tanks, to be deployed at a gas field in eastern Syria near Deir-ez-Zor.  (Useful, rather extensive treatment here.)  The location most widely discussed is the Conoco gas field Tabiye.  The industrial installation for the field is located just east of Deir-ez-Zor, as shown on the maps, and has been under the control of Kurdish and Arab SDF forces since 2017.  It was also the site of a bizarre episode thought to involve Russian mercenaries in February 2018, in which U.S. troops came under attack, and some dozens of the attackers were killed. 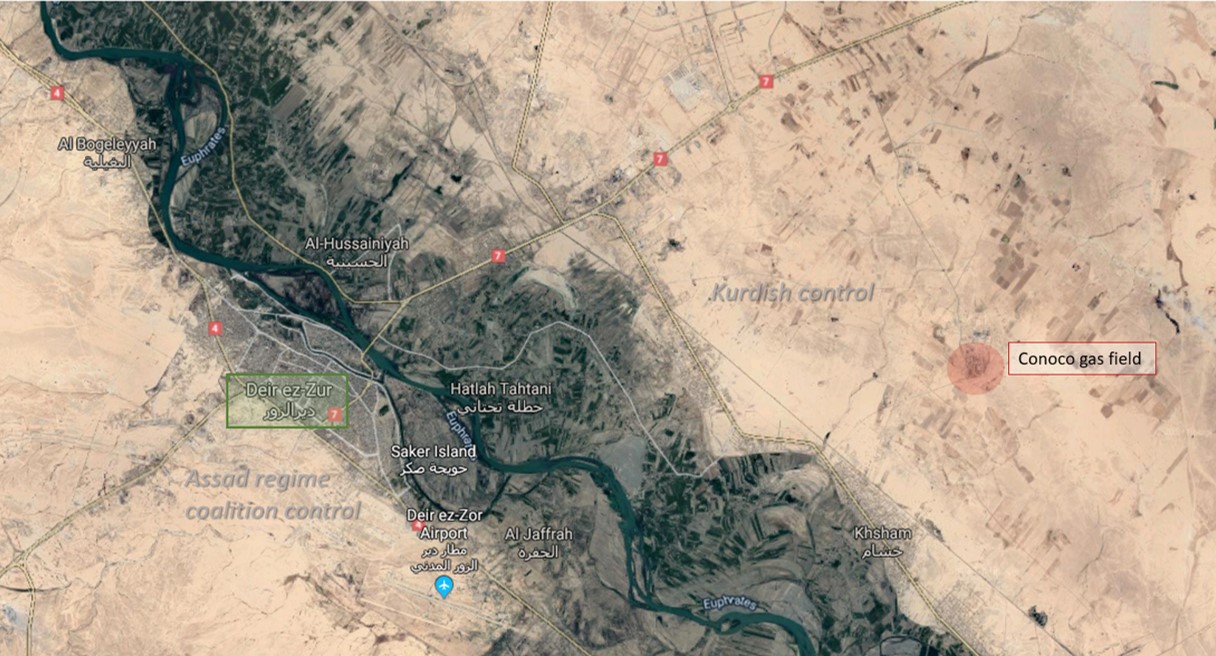 Location of the Conoco gas field east of Deir-ez-Zor suggested to be deployment base for a U.S. armor contingent. Google satellite map; author annotation. 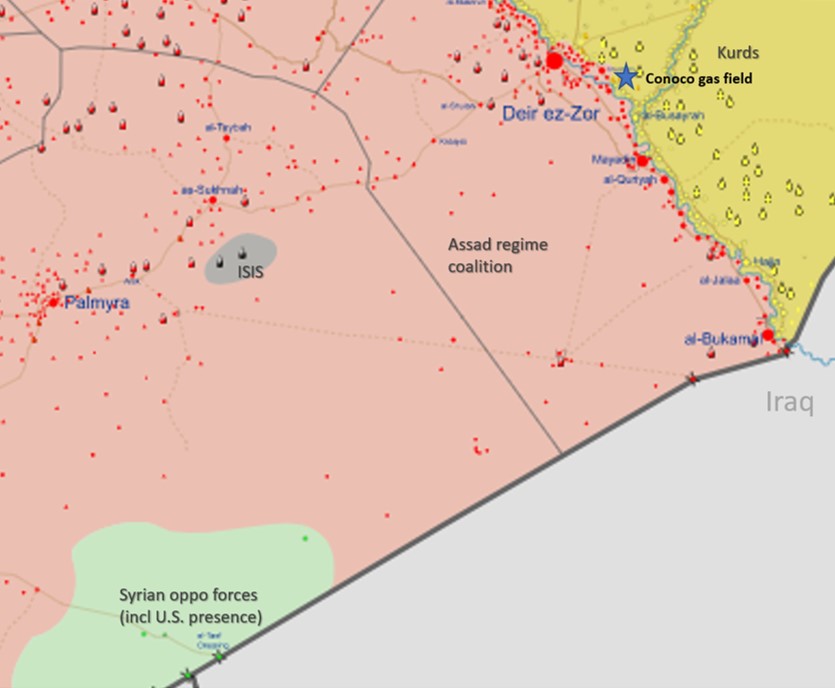 Factional areas of control around Deir-ez-Zor, Oct 2019. Author annotation; map credit: By Ermanarich – This is a retouched picture, which means that it has been digitally altered from its original version. Modifications: Marks for the cities and towns as well as color on the ground, were added to show the situation in the Syrian Civil War. The original can be viewed here: Syria location map3.svg. Modifications made by Ermanarich., CC BY-SA 4.0, Link

The Oil Fields discussed in my speech on Turkey/Kurds yesterday were held by ISIS until the United States took them over with the help of the Kurds. We will NEVER let a reconstituted ISIS have those fields!

On Sunday, NBC reported on a convoy of U.S. vehicles crossing the border of northeastern Syria from Iraq at Qamishli, apparently heading south toward the oilfields.  The vehicles in question (going by the image posted by NBC, as well as video posted by Arab24) are MRAPs used by special operations forces, and would be an indication of movement toward the oilfields, but not of a heavy armor deployment there.

The total effect of these events, however, certainly represents a refocus from defeating ISIS.  It’s fair to characterize the type of force envisioned as suitable for the suggested purpose.  Some analysts are dubious (see the War Zone link above, for example) about the comparatively small size of the armored force, and its ability to hold out if a well-equipped assault were mounted against it. The context of those doubts is seeing the armored force as arrayed for what would effectively be static protection of the territory associated with the gas field (potentially including other oil/gas infrastructure in the vicinity).

Strikingly, there doesn’t seem to be much skepticism about the currently-implied threat to the oil and gas infrastructure; i.e., the remnants of ISIS in eastern Syria.  But in terms of holding territory that could function as an operating base, those remnants don’t amount to much.  Their ability to launch attacks that could seriously jeopardize either the protected infrastructure or U.S. forces seem to me to be quite limited.

Of more interest are two other aspects of this development.  One is the location being discussed for the U.S. armor deployment.  It’s perfectly situated to keep a presence on the “land bridge” Iran has been laboring to develop into Syria since 2014.  In fact, it could hardly be situated more ideally.

At the Conoco gas field installation, a U.S. force would be located just east-southeast of Deir-ez-Zor, on the entry axis of the Euphrates Corridor land bridge from Iraq, but before the Y-split that heads either up the Euphrates, toward Raqqa, or across central Syria to the southwest and into Damascus. 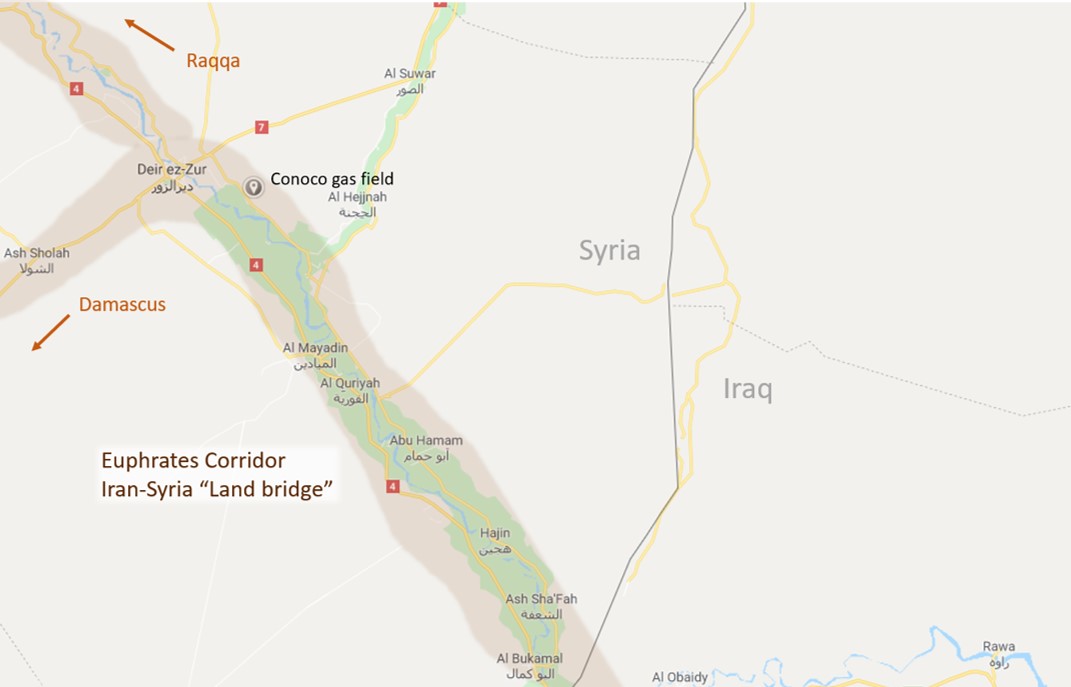 It’s the location you want, for interdiction or harassment of forces trying to move between Deir-ez-Zor and the border with Iraq, just southeast of Al-Bukamal.  The forces to be interdicted would, in that area and with that quality of force, be those under the direction of Iran.

This situation, combined with a sustained U.S. presence at Al-Tanf, opposite the extreme western corner of Anbar province and within a few miles of Jordan, would place U.S. forces on both major paths for an Iranian land bridge. 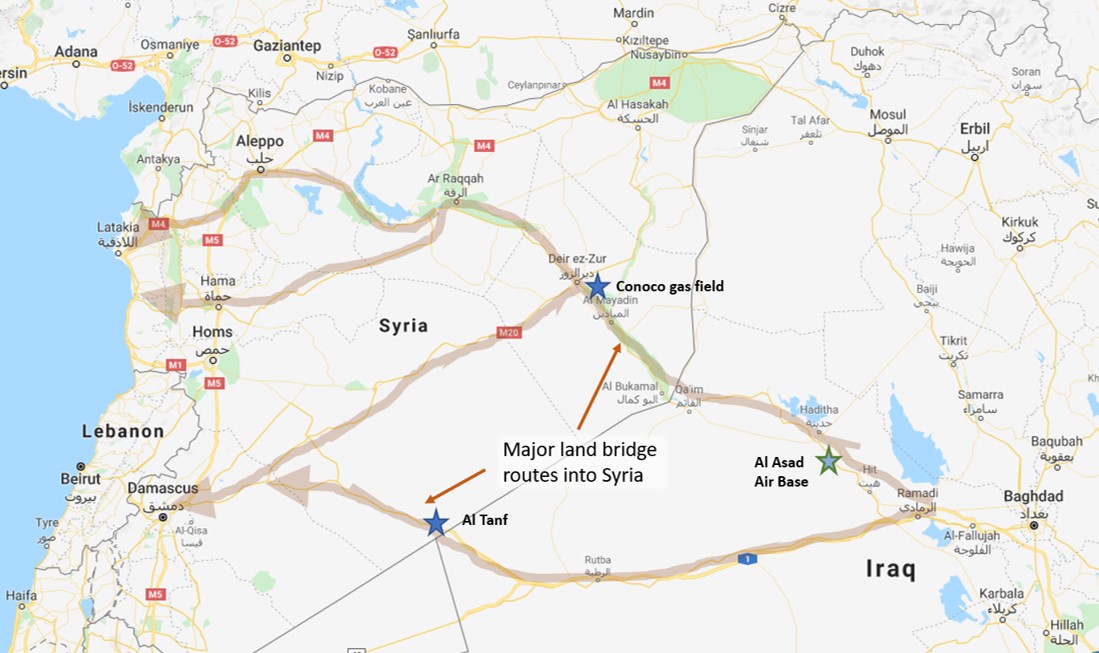 Moreover, the Iraqi air base at Al-Asad in Anbar province, where U.S. forces have a significant presence, would function at need as a convenient source of air support, force staging, and rear operations.  It’s about 180 statute miles from Deir-ez-Zor.

Again, the deployment envisioned is of a small force, according to reports so far (the personnel numbers suggested – around 500 – would suggest a mix of about 15 tanks and APCs, supported by a headquarters element).  But the second noteworthy aspect is the composition.  This isn’t a force for COIN, security foot patrols, MOUT alongside the Kurds, or community-tending.  It’s not embedded special forces, for whom function takes precedence over location.

It’s a maneuver force for tactical superiority over terrain.  It’s a signal of a shifting orientation toward U.S. interests in Syria: picking and choosing where based on what.

The tether to protecting oil and gas infrastructure is valid and serviceable, to the extent Congress will agree that’s a priority.  The force envisioned appears suitable for that purpose.

That said, my eye sees the following.  Instead of auxiliary artillery, air support, and embedded special forces for unique tasks, mostly related to asymmetric small-unit fighting, the U.S. emphasis will be on having enough of an armored combat backbone to (a) act as a deterrent, and (b) fall in on with additional forces, if necessary, and with combined arms (such as assault helicopters, drones, and artillery) stage-able through Al-Asad (and possibly Al-Tanf).

The source of such additional forces would be the theater reserve assembled in Kuwait, which is where the initial armor deployment to the gas field east of Deir-ez-Zor would come from.  The strategic concept would be emitting deterrence signals with the initial deployment, and being able to ramp up at need to keep the deterrence posture ahead of the intended audience for it, in Tehran.

A key component of the geography is the locations around the land bridge corridors.  An armor bridgehead next to Deir-ez-Zor forms the basis for maneuvering on both sides of the Iraq-Syria border, converging forces if necessary from up and down the Euphrates.  Al-Tanf offers a flanking vector for low/slow airpower, in addition to its situation on the second of the major land bridge arteries.

A lot depends on keeping a stable situation in Iraq, clearly.  We will see how serious this plan is in the coming days, and whether it is meant mainly for transient kinetic signaling to Iran, or for meaningful implementation.  I wouldn’t put the former past, Trump.  His thing is emitting tactical signals to create motion and energy.  The lightly armored vehicles seen in convoy at Qamishli over the weekend may be the extent of the “armored” force that actually moves in.

But note that this stake-driving signal in Syria is being floated at the same time the U.S. is sending a plus-up of air defense and surveillance assets to Saudi Arabia and the other Gulf states.  In that context, it looks even more like a deterrence move against Iran.

While this development is not about the oil and gas infrastructure – it can be about that, viewed through a certain prism – it is always well to remember what we have discussed before: that militarizing landscapes make fighting over them more likely.  The aspirations of the radical regime in Tehran are forcing a rapid, unprecedented militarization of the vast, inhospitable interior of western Iraq, northern Saudi Arabia, and southeastern Syria.  Technology and the modern basis for frequent human contact are now such that there is no foreseeing de-militarization of this region in the future.