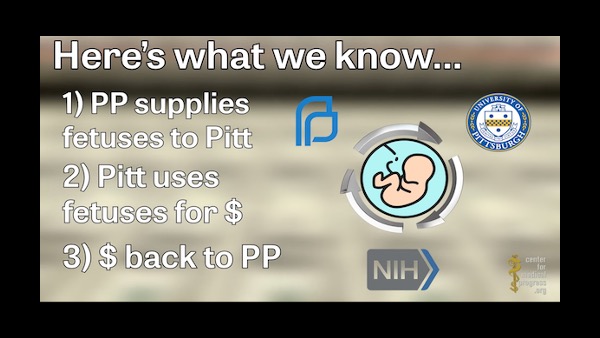 Taxpayers have spent nearly $3 million since 2015 on a “fetal tissue bank” at the University of Pittsburgh, and some of the tissue was collected from full-term babies. U Pitt fetal tissue

Department of Health and Human Services documents were released after a Freedom of Information Act (FOIA) request was made by the Center for American Progress through their attorneys at Judicial Watch.

Nearly $3 million in federal funds went to the school beginning in 2015, according to more than 250 pages of the documents that were obtained by Judicial Watch through a Freedom of Information Act (FOIA)  against HHS.

The lawsuit was filed after HHS failed to respond to the conservative non-profit’s April 28 FOIA request for copies of grant applications for the school’s “tissue hub and collection site.” Judicial Watch submitted its FOIA on behalf of the Center for Medical Progress.

Judicial Watch issued a statement once they had received the documents. It included details on the specific body part “samples” that the project would focus on collecting and notes that some of the tissue obtained were from fetuses in the third trimester.

In addition, the documents say that the school was boasting about a “ButcherBoy band saw for sectioning bone” as well as a “frozen section has digital video feed to and from operating rooms. This allows for instantaneous discussions with the surgeons [as] immediate show and tell for them.”

Judicial Watch noted that U.S. Census Bureau data indicates that Pittsburgh is almost 70 percent Caucasian. Nevertheless, the proposal by the University of Pittsburgh included racial targets for the human body parts, with half from minority “subjects” citing Pittsburgh’s “diverse” population.

The Center for Medical Progress called the University of Pittsburgh “racist” in their press release.

It’s all rather ghoulish.

“These documents show taxpayer money is being used to turn the University of Pittsburgh into a one-stop human fetal tissue shop—from procuring the tissue from elective abortions, ‘subdividing’ the human remains, to distributing and shipping the harvested tissue,” Judicial Watch President Tom Fitton said in the statement announcing receipt of the documents.

In mid-June, ClashDaily reported that Fauci’s NIH had spent over $400,000 in a University of Pittsburgh study that was grafting fetal scalp tissue onto rodents. Dr. Fauci’s NIAID Gave Nearly $500K In Grants To University Study That Grafted Fetal Scalps Onto Lab Rodents.

Just how much taxpayer money is being spent on these “researchers” playing God with murdered children? And as a society, how can we possibly be okay with that?