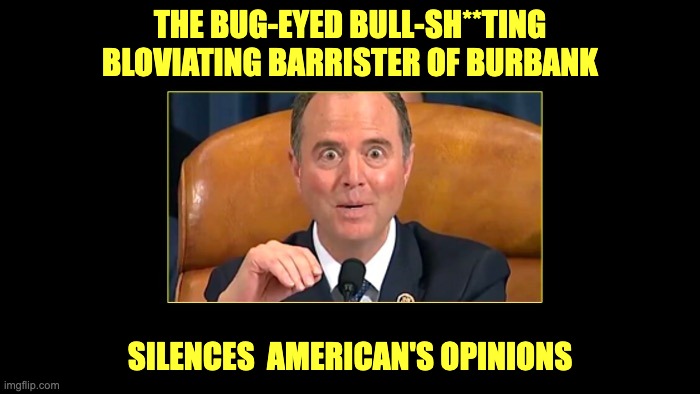 There appears to be a vast new power structure installing itself here in the United States, and there are concerns that Silicon Valley may be weaseling its way into a role once held by oligarchs and the like.

These moguls of the social media landscape wield an extraordinary amount of power already, but without any of the constraints that are meant to keep our public servants and services in check. In short, Twitter and their colleagues can shape the global narrative at will and without oversight.

And, what’s scarier still, are the politicians who think that they can bully these platforms into submission.

It was revealed in the latest “Twitter Files” that the office of Rep. Adam Schiff, D-Calif. Also known as the Bug-Eyed Bull-Sh**ting Bloviating Barrister Of Burbank, made requests for Twitter to suspend certain accounts.

In the second of two back-to-back batches of Elon Musk’s “Twitter Files” shared on Tuesday by Substack writer Matt Taibbi, he reported that Twitter “received an astonishing variety of requests from officials asking for individuals they didn’t like to be banned.”

An example he shared was one sent in November 2020 by Schiff’s office, who contacted Twitter hoping the tech giant would take action regarding “alleged harassment from QAnon conspiracists” against Schiff’s staff, including aide Sean Misko.

The demands were extraordinarily forward.

“Remove any and all content about Mr. Misko and other Committee staff from its service- to include quotes, retweets, and reactions to that content,” the request to Twitter read. “Suspend the many accounts, including @GregRubini and @paulsperry, which have repeatedly promoted false QAnon conspiracies.”

Our public servants shouldn’t fear free speech, and our new information overlords shouldn’t suppress it, yet here we are, wondering just how deep into this Orwellian nightmare we’ll sink.

Cross-; posted with Flag and Cross