Twitter: Threatening Kellyanne Conway Is Not Against The Rules 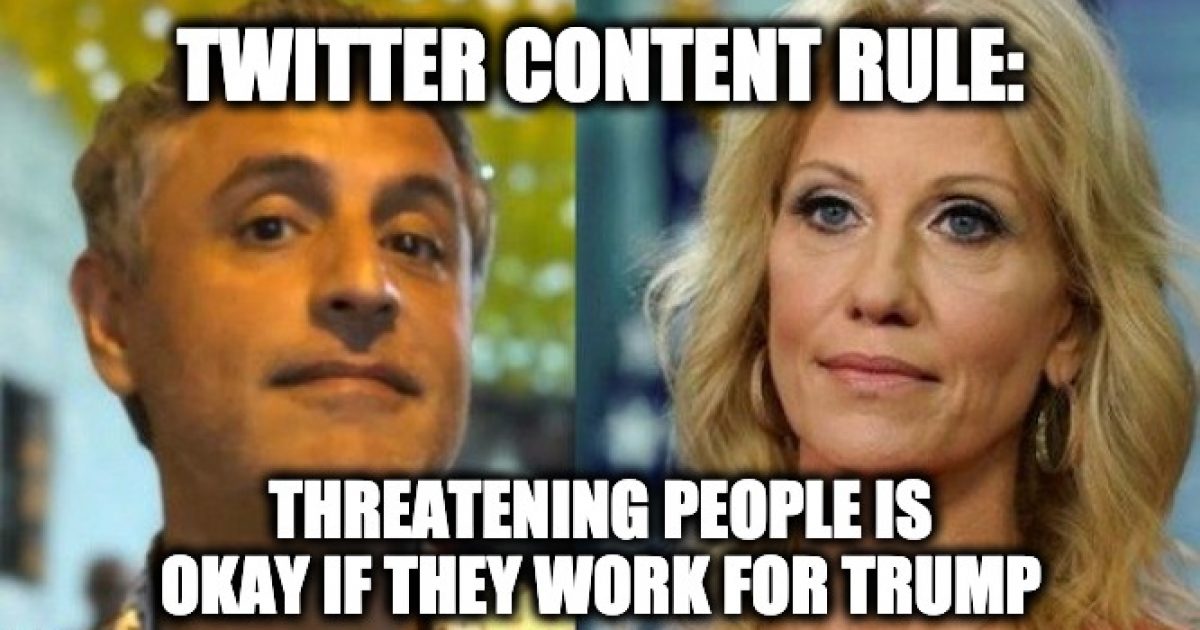 Aslan, an Iranian-American scholar who hosted a “spiritual travel series” called Believer on the left-wing network, was responding to comments made by Conway about the recent tragedies in El Paso and Dayton.

The President’s advisor offered reasonable thoughts on coming together as Americans and suggesting “finger-pointing, name-calling & screaming,” as Democrats are wont to do in these situations, will solve nothing.

Aslan proved her right, as moments later, he tweeted, “You are ‘the depraved evil’ we need to eradicate.”

You are “the depraved evil” we need to eradicate. https://t.co/zPJhVS1hkn

Have fun at your 10-hour interview with the Secret Service, Reza.

When television host John Cardillo responded that the only way to interpret Aslan’s comments were as a direct threat against Conway, the former CNN employee doubled down: “We are all so f***ing fed up with you racist GOPers and your bad faith bull***.”

We’re not sure the description of ‘scholar’ should be applied to this clearly unhinged individual.

Honestly, after the Secret Service interview, Aslan may want to consider seeking some sort of psychiatric help to overcome his Trump Derangement Syndrome.

Translation: the president is a man baby that must be ignored in times of crisis. https://t.co/Kv1hIC7hEG

CNN cut ties with the host following those comments.

At the beginning of the year, Aslan helped spread the Covington Catholic media hoax, in which teenagers were falsely accused of harassing a Native American Vietnam veteran.

In doing so, he also threatened one of the teenagers with violence.

Honest question. Have you ever seen a more punchable face than this kid’s? pic.twitter.com/jolQ7BZQPD

Twitter responded to the threat saying they “could not identify any violations of the Twitter Rules or applicable law.”

Similarly, the social media giant could find no violations with his call to ‘eradicate’ Kellyanne Conway.

“This tweet does not break our rules at this time,” an official told the Daily Wire.

Of course not–now if Reza Aslan were a conservative, he would no have only been banned from the platform, but good old @jack would try to have him drawn and quartered.

The Media has a big responsibility to life and safety in our Country. Fake News has contributed greatly to the anger and rage that has built up over many years. News coverage has got to start being fair, balanced and unbiased, or these terrible problems will only get worse!

On Monday, President Trump lashed out at the ‘fake news’ media, saying they are in part responsible for the level of anger in this country. Aslan’s threat is further proof that he is absolutely correct.