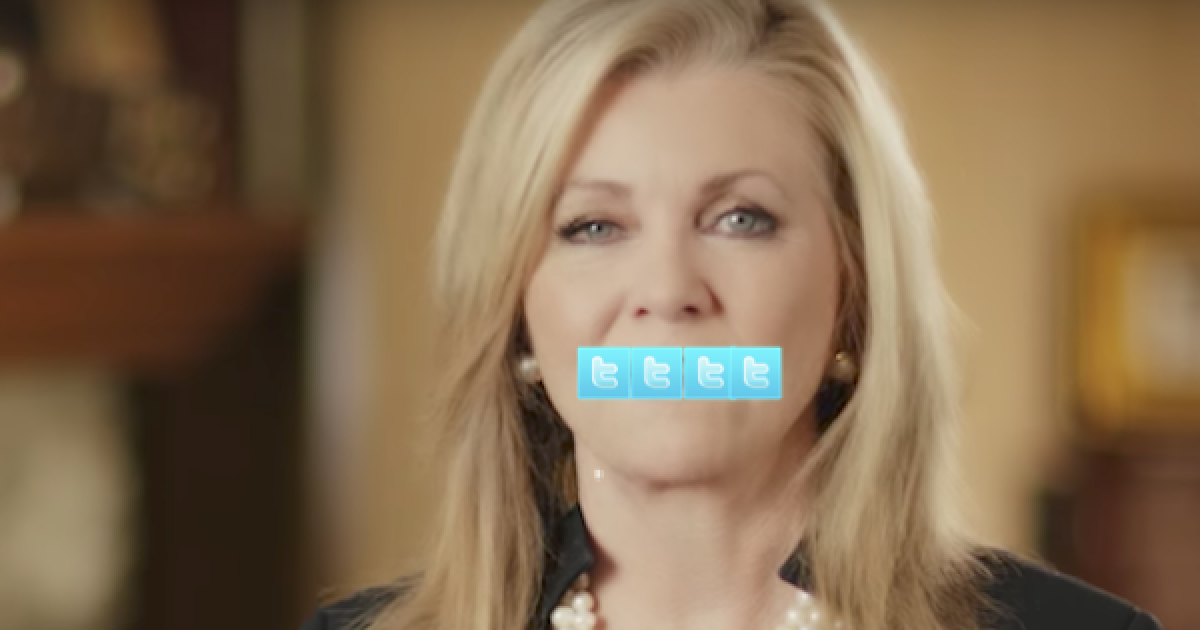 Promotion of Tennessee Republican Rep. Marsha Blackburn’s Senate campaign announcement video has been blocked by Twitter because she mentions her committee’s work in stopping Planned Parenthood’s sale of aborted baby parts. Blackburn is running for the seat being opened by the retirement of Bob Corker mentions in the ad that she “fought Planned Parenthood and we stopped the sale of baby body parts.” A Twitter representative told Blackburn’s media buyers on Monday that statement was “deemed an inflammatory statement that is likely to evoke a strong negative reaction. And the that Blackburn campaign would be allowed to run the rest of the video if the flagged statement is taken out.  Truth be told the liberal Twitter is simply censoring a pro-life message.

The Planned Parenthood statement was based on Rep. Blackburn’s tenure as chairman of the House Energy & Commerce Committee’s Select Investigative Panel for Infant Lives, In December 2016 the committee announced that it referred  Planned Parenthood Gulf Coast to Texas Attorney General Ken Paxton for criminal prosecution for its role in selling the baby parts of aborted babies. Eight other organizations involved in selling baby parts were also referred to their local Attorneys General.

In recent years social media had become a key element of political campaign advertising, however, the major sites Facebook, Google, and Twitter are all private liberal directed companies who have no problem suppressing conservative messages, be it from politicians, or conservative writers.

Blackburn’s nearly two-and-a-half minute video also features footage of her shooting a gun and taking fellow Republicans in the Senate to task for failing to repeal Obamacare. While the campaign was banned from running a campaign to promote the video, Rep. Blackburn wasn’t blocked from tweeting the video it on her own account,  the campaign account tweeted the ad Monday afternoon, and asked users to retweet the message as a way to “join me in standing up to Silicon Valley.”

“This is urgent. I’m being censored for telling the truth. Twitter has shut down my announcement video advertising. Silicon Valley elites are trying to impose their values on us. When I talked about our legislative accomplishments to stop the sale of baby body parts, they responded by calling our ad ‘inflammatory’ and ‘negative.”

Below is the transcript and video in question. Please do not watch if you are a snowflake, you may melt.

The United States Senate…It’s totally dysfunctional and it’s enough to drive you nuts. And that’s why I’ve decided to do something about it. I’m Marsha Blackburn. I’m a hardcore, card carrying Tennessee conservative. I’m politically incorrect, and proud of it. So, let me just say it like it is: The fact that our Republican majority in the U.S. Senate can’t overturn Obamacare, or will not overturn Obamacare…it’s a disgrace. Too many Senate Republicans act like Democrats. Or worse. And that’s what we have to change. Here in Tennessee, I fought my own party to stop a massive, job-killing, state income tax. And we stopped it. We won. I know the left calls me a wing-nut or a knuckle-dragging conservative. And you know what? I say that’s all right, bring it on. I’m 100% pro-life. I fought Planned Parenthood and we stopped the sale of baby body parts. Thank God. I shoot skeet, have a concealed carry permit for the gun I do pack in my purse. I believe our government spends too much, grows too much, and is bankrupting our children’s future. I believe in President Trump’s immigration ban. And I’ll fight with him every step of the way to build that wall. I stand for hundreds of millions of honest Americans who work hard and they play by the rules. And I stand for the greatest country the world has ever known. I stand when our President walks in the room. And yes, I stand when I hear the Star-Spangled Banner. A great Tennessean who wasn’t so politically correct himself once said, “One man with courage makes a majority.” Well, courage comes in both genders. And I’m running for U.S. Senate because I will fight every single day to make our Republican majority act like one. Too much is at stake. America needs a conservative revolution and leaders who are willing to fight in it. I’m Marsha Blackburn. That’s why I’m running for U.S. Senate, and I’d be honored to have your vote.