After Lewis Eulogy, Tucker Slams Obama As “One of the Sleaziest” Political Figures EVER

Tucker Was Being Too Kind 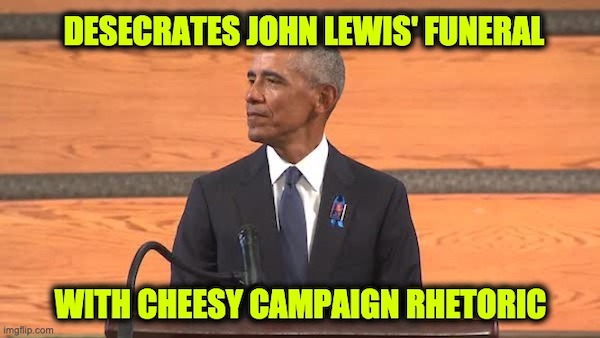 Fox News host Tucker Carlson slammed Barack Obama as “one of the sleaziest” and “most dishonest” political figures in the history of the United States.  Tucker slams Obama

Carlson was particularly upset with the former President taking the somber occasion of Rep. John Lewis’s memorial service and turning it into an anti-Trump, anti-Republican, anti-police speech.

During his eulogy Thursday, Obama made a reprehensible comparison between George Wallace (D-AL), a staunch segregationist and Jim Crow supporter, to President Trump.

He compared today’s police officers to Bull Connor, the commissioner of public safety in Birmingham, Alabama, in the 1960s who was known for using fire hoses and police dogs against civil rights activists.

“Bull Connor may be gone, but today we witness with our own eyes police officers kneeling on the necks of Black Americans,” Obama stated.

“George Wallace may be gone, but we can witness our federal government sending agents to use tear gas and batons against peaceful demonstrators,” he added.

Obama also spent time during his speech discussing mail-in voting schemes and the filibuster, something he described as “another Jim Crow relic.”

Turning serious occasions into political stump speeches is nothing new for Obama. Tucker, however, was not pleased …

Tucker Carlson on Obama speech: "Imagine if some greasy politician showed up at your loved one's funeral and started throwing around stupid partisan talking points about senate procedure." pic.twitter.com/I0p8KOhxy4

Carlson pointed out that using a eulogy to score political points and continue your lifelong anti-police activism is hardly the classiest move.

“Barack Obama, one of the sleaziest and most dishonest figures in American politics, used George Floyd’s death in a funeral to attack the police,” he fumed.

“If some greasy politician showed up at your loved one’s funeral and started throwing around stupid partisan talking points about Senate procedure … you would probably walk out,” Carlson continued. “Desecrating a funeral with campaign slogans, what kind of person would do that?”

Well in the case of Obama it would be a bigot, cop-hater, and anti-Semite, who would do that,

The kind of person who thinks everything is about him? A narcissist?

“The country, fallen apart, riven by racial strife and tribalism, and one of the most respected people in the whole country decides to pour gasoline on that and compare the police to Bull Connor?” an exasperated Carlson said.

“As if America and Minneapolis is like Birmingham, Alabama in 1963? It’s insane. It’s reckless.”

It’s Obama, the man who was in office for six months when he told America “the Cambridge police acted stupidly. even though he had already admitted “not having been there and not seeing all the facts.

Surely Tucker remembers the memorial for the Dallas police massacre in 2016. When Micah Xavier Johnson opened fire during a Black Lives Matter protest deliberately gunning down 5 police officers and injuring nine others, all because he “wanted to kill white people, especially white officers.”

Instead of focusing on a condemnation of the racist terrorist attack and celebrating the lives of the officers, Obama turned it into a gun control speech and criticized the police.

Rather than condemn the murderers he condemned America and the Dallas police.https://t.co/4yfoqdB2u0

Just a Bitter Shell of a Man

Aside from narcissism and his hatred of Jews, one of the driving motivations behind everything Obama says or does is his bitterness towards President Trump.

Trump has decimated his legacy and lives rent-free in Obama’s mind … even at a memorial service.

Some of that bitterness has been on display recently, as the former President joined Michelle Obama for a podcast in which the two discussed his successor.

During her premiere episode, Obama discussed how young people’s interest in government is generally limited to when something goes wrong.

“We’re getting a good lesson in that right now,” he quipped.

The two also suggested Trump is ignorant of history and doesn’t read.

“As you pointed out as a former president who reads and knows history – Let’s just take moment to pause and think about that,” Mrs. Obama snidely commented.

Come to think of it, the people most responsible for making Obama look like a ‘sleazy,’ ‘greasy’ has-been are … the Obamas.