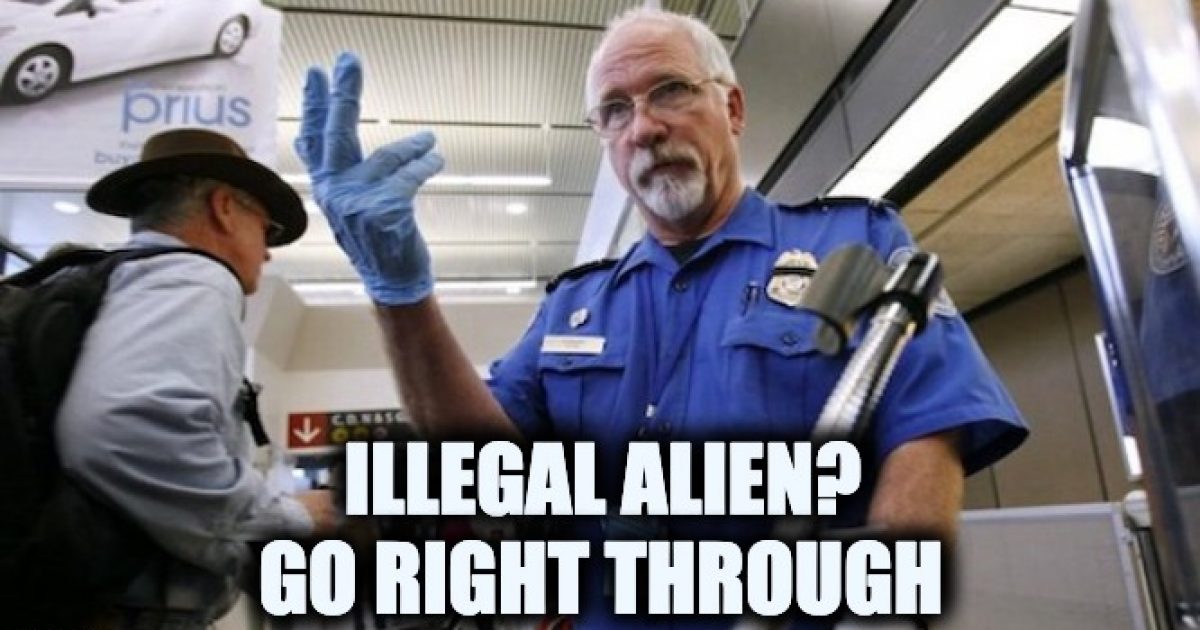 Getting on an airplane can be an unpleasant process. First showing a picture ID then waiting on line, taking off one’s shoes and belt, putting your arms up as you get zapped by an x-ray machine, and sometimes getting your privates felt up by a TSA agent. But it’s a necessary process unless one wants the plane they are about to ride on to blow up at 30,000 feet. That’s why it is so upsetting that the TSA allows people whose very presence in the United States is a crime, to bypass the security process.

People who are in the country illegally and caught and released by ICE or Border Patrol are being allowed to use “notice to appear in court” papers as an acceptable form of identification to board flights. Legal residents, however, need to dig into their wallets and display one of the fifteen acceptable forms of ID to be allowed onto flights. This is not a suggestion that folks here legally should not have to dig out an acceptable ID, but for safety’s sake, illegal aliens should have to do the same thing.

And there’s more. Appearing on Fox and Friends,  Deputy Assistant Secretary of Transportation Oliver McGee said the illegals,  “They are walking them around the checkpoint and directly on the plane, while you, Steve [Doocy], and I are taking off our buckles and belts and suspenders, and shoes and socks, and are waiting in a long line to get past that same point.”

That’s right, while people here legally are getting zapped, felt up, or both, illegals aliens are going right onto the plane, because the volume of illegals entering the country is forcing the TSA to cut corners and make flying less safe.

Mr. McGee said the TSA was giving illegals special treatment because “they are worried about trying to do this little band-aid fix because if they have a large number of asylum-seeking – of migrants hitting the airports, how do they offload them into other areas?” In other words, because there are so many illegals coming into the country, arrested and release (catch and release) the TSA allows them to get on a plane.

As explained by the Washington Examiner

Since January, Immigration and Customs Enforcement has released from custody more than 200,000 migrants who arrived at the border as part of a family. The releases are mandatory under a 2015 court ruling that bars ICE from holding families more than 20 days.

ICE often drops people off at bus stations, where nongovernmental organizations that have been alerted to the drop-offs send volunteers to help migrants make travel arrangements to join family members in other cities. The agency then wipes its hands clean following the releases. ICE would not comment on the legal precedent for undocumented immigrants boarding flights in the U.S.

So instead, those looking to depart the border via regional airports become TSA’s burden. If TSA chose to turn away people at airports it would apply more pressure to overwhelmed bus companies like Greyhound and local motels in border towns, complicating an already dire situation for localities struggling to care for this demographic.

Gee whiz, I feel so much safer about flying now.

In the end, it’s not the fault of the TSA, but it is another example of how Congressional Democrats refusal to secure our borders is endangering the safety of American citizens.

To see Oliver McGee’s appearance on Fox and Friends watch the video below: