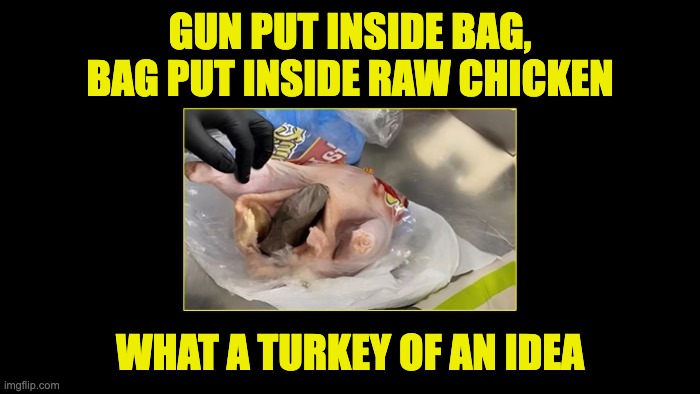 Groucho: I say that’s a viaduct.

This news seems like it came straight out of a Marx Brothers movie. The difference is that when they were out of character, the Marx Brothers were very smart—- this lady’s an imbecile. She came up with the chicken-sh*t idea that she could sneak a gun onto a plane by hiding it inside a raw chicken.

What an idiot! Everyone knows that chickens can’t fly!

The agents at Fort Lauderdale-Hollywood International Airport detected the gun in the chicken inside the offender’s carry-on luggage and turned her over to Customs and Border Patrol officers. Biden must have been angry because he usually didn’t allow CBP offers that close to our southern border.

The TSA didn’t want people to think the incident ruffled their feathers, so they wrote a pun-filled sarcastic post on The TSA’s Instagram page.

The plot chickens as we barrel our way closer to Thanksgiving. For us, it’s a time to be thankful that our officers are always working around the cluck to keep you safe. Take for instance this “hen you believe it?” find at Fort Lauderdale-Hollywood International Airport. We hate to beak it to you here, but stuffing a firearm in your holiday bird for travel is just a baste of time. This idea wasn’t even half-baked; it was raw, greasy, and obviously unsupervised. The only roast happening here is this poor packing choice!

Feather you like it or not, there are rules for traveling with guns and ammunition. So, don’t wing it; roost over the proper packaging info through the link in our bio.

The TSA proved that even if you come up with a creative idea, trying to sneak a handgun onto an airplane just won’t fly.