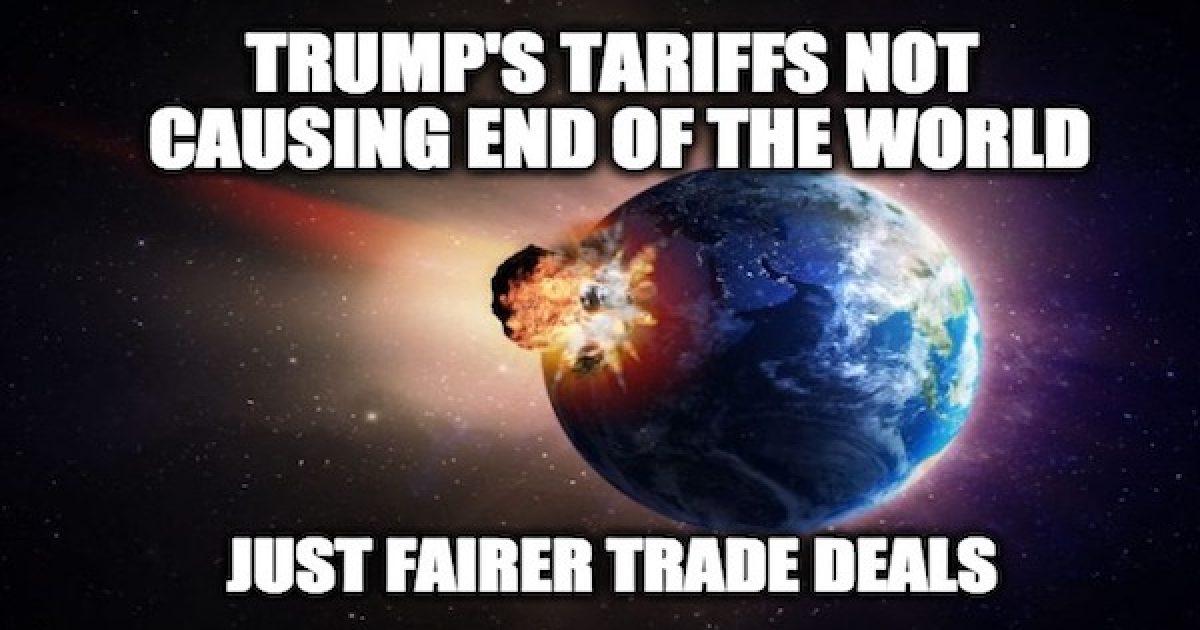 They promised it would be the end of the world. When President Trump announced aluminum and steel tariffs, and then followed up with another $50 billion in tariffs on goods from China, he said all he really wanted was fair trade, to close the $300 billion trade gap with the Chinese and save/create jobs here in the United States. After all, this president campaigned on a promise to correct the US’ global trade imbalance, particularly with China, and to revitalize US manufacturing.

As with any action this president takes, the media told us that thanks to the tariffs the country was headed for a disaster of biblical proportions, you know Old Testament, real wrath of God type stuff– fire and brimstone coming down from the skies! rivers and seas boiling! Forty years of darkness! Earthquakes, volcanoes…The dead rising from the grave…human sacrifice, dogs, and cats living together, NY Jets winning the Super Bowl… mass hysteria.

While the above scenario almost happened in the movie “Ghostbusters” President Trump’s tariff threats are having a more positive effect. China is negotiating with the US on ways to remove some of the laws that are unfair to US business.

The negotiations are still ongoing but per the Wall Street Journal

China and the U.S. have quietly started negotiating to improve U.S. access to Chinese markets, after a week filled with harsh words from both sides over Washington’s threat to use tariffs to address trade imbalances, people with knowledge of the matter said.

The talks, which cover wide areas including financial services and manufacturing, are being led by Liu He, China’s economic czar in Beijing, and U.S. Treasury Secretary Steven Mnuchin and U.S. trade representative Robert Lighthizer in Washington.

Privately, Liu and Mnuchin exchanged letters in the past week on further opening China’s financial services sector and cutting Chinese tariffs on imported cars, according to the Financial Times.

China has a 25 percent tariff on U.S. cars and is now discussing lowering that tariff. China has offered to buy more semiconductors from the United States by diverting some purchases from South Korea and Taiwan, to help cut China’s trade surplus with the U.S., CNBC confirmed on Monday. And Chinese officials are also rushing to finalize new regulations by May that will allow foreign financial groups to take majority stakes in its securities firms.

Premier Li Keqiang said on Monday China and the United States should maintain negotiations and he reiterated pledges to ease access for American businesses, as China scrambles to avert a trade war.

Li told a conference that included global chief executives that China would treat foreign and domestic firms equally, would not force foreign firms to transfer technology and would strengthen intellectual property rights, repeating promises that have failed to placate Washington.

A deal with China is by no means done however if it weren’t for President Trump’s tariff announcement China wouldn’t be at the negotiation table talking about reducing the trade deficit.

And it’s not just China. In April 2017, much to the dismay of the media President Trump announced that the US/South Korea trade deal would have to be renegotiated or scrapped because its terms were unfair to America.

Trade Minister Kim Hyun-Chong announced on March 26 that Korea and the U.S. reached an agreement on amending their six-year-old free trade agreement (Korea-U.S. FTA) and on exempting Korea from U.S. steel tariffs. He made the comment during a press briefing held at the government complex in Seoul.

Trade Minister Kim said both sides reached an agreement in principle on FTA amendments. He stressed to the press that there will be no further opening of agricultural markets and no changes to the tariffs that had already been lifted.

Under the updated agreement, Korea will allow the U.S. to extend its 25 percent tariff on imports of Korean pickup trucks by additional 20 years to 2041. The tariff was originally scheduled to expire in 2021. Korea will also allow U.S. automakers selling fewer than 50,000 units per year in Korea to be exempt from Korean safety standards as long as they meet U.S. safety standards, up from 25,000 vehicles previously.

Regarding the steel tariff issue, Trade Minister Kim said the U.S. agreed to exempt Korea from steel tariffs imposed under Section 232 of the U.S. Trade Expansion Act in return for Korea receiving a quota of about 2.68 million tons of steel exports annually. This is equivalent to about 70 percent of the annual average Korean steel exports to the U.S. between 2015 and 2017.

None of these new deals would be possible if the President hadn’t implemented his program of reducing regulations on business and the new tax plan passed at the end of last year. Those policies reduced the cost of doing business in the U.S. making American companies more competitive.

Shrinking the trade deficit was a big element of Trump’s campaign promise to create jobs and improve the economy. Rather than creating a disaster of biblical proportions, the threat of tariffs seems to be helping the president keep that promise.