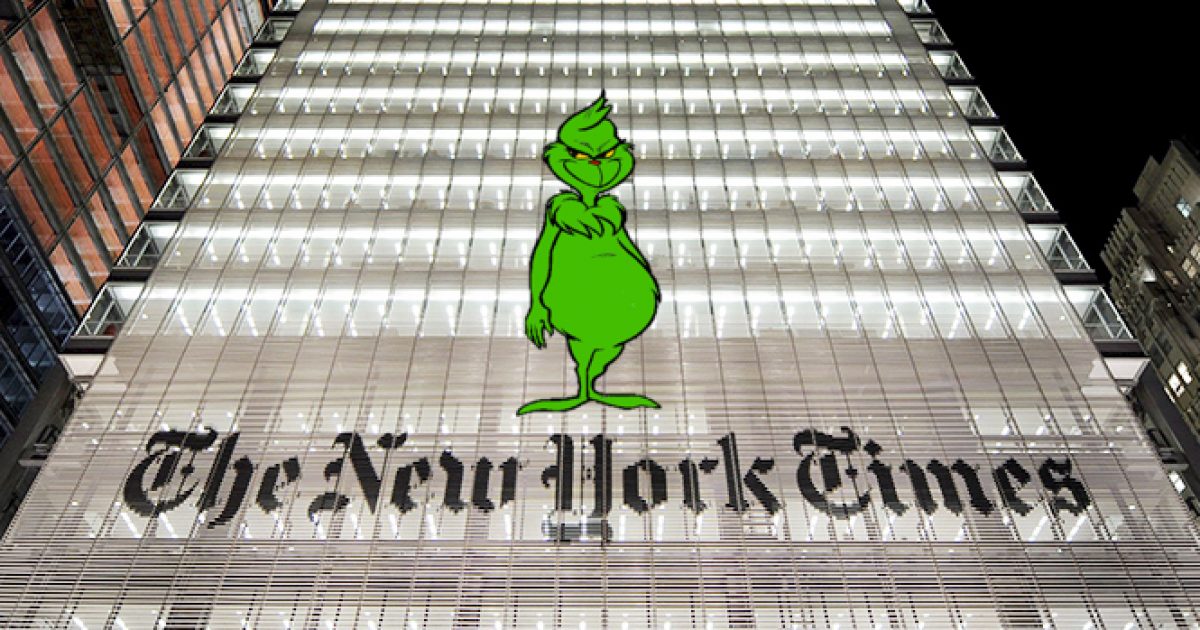 The night before he signed the order, the NY Times tried to ruin the day and rally liberal Jews against the exec. order. The Times published an article falsely claiming that the President’s order will describe Jews as a faith, a nation, and a race.  The historic EO said nothing of the sort.  President Trump’s order made it clear that Title VI of the Civil Rights Act of 1964 applies to hatred against Jews:

Trump’s order also states that In determining Antisemitism, federal Agencies will consider “the non-legally binding working definition of anti‑Semitism adopted on May 26, 2016, by the International Holocaust Remembrance Alliance (IHRA). The IHRA definition states, “Antisemitism is a certain perception of Jews, which may be expressed as hatred toward Jews.  Rhetorical and physical manifestations of antisemitism are directed toward Jewish or non-Jewish individuals and/or their property, toward Jewish community institutions and religious facilities”; and the “Contemporary Examples of Anti-Semitism” identified by the IHRA, to the extent that any examples might be useful as evidence of discriminatory intent.”

The non-legally binding part of the wording is not a Trump invention. It is part of the name of the Antisemitism definition as named by IHRA plenary in Bucharest three years ago.

The contemporary part of the if the IHRA is controversial to some because it includes provisions labeling anti-Semitic actions such as claiming there is a worldwide Jewish conspiracy controlling the economy, media, govt,, etc.; Holocaust denial or revisionism; dual loyalty between the U.S. and Israel; denying the Jewish people their right to self-determination, e.g., by claiming that the existence of a State of Israel is a racist endeavor; applying double standards toward Israel by requiring of it a behavior not expected of other democratic nation; using the classic examples of Antisemitism such as claims the Jews killed Jesus, or blood-libel against Israel or Israelis; comparing Israeli government policies to the Nazis; and blaming all Jews for the policies of the govt. of Israel.

Note the provision above “denying the Jewish people their right to self-determination” was also called anti-Semitic by Pope Francis, ”Whoever does not recognize the Jewish People and the State of Israel falls in Antisemitism”

If one is using the IHRA definition, the BDS movement is anti-Semitic, as well as recent statements by Democratic members of Congress as well as former Democratic Party Presidents Jimmy Carter and Barack Obama and some in their administrations.

President Trump’s order also directed federal agencies to get back to him within 120 days with a report of other ways the Government can use nondiscrimination authorities to address anti-Semitism.

This order should be celebrated by anyone who wants to eliminate discrimination in the country, and especially American Jews who have been facing a growth in Jew-hatred fueled by eight years of Barack Obama’s public anti-Semitic and anti-Israel policies.

Perhaps to deny this President deserved recognition for this historic step to fight antisemitism, the night before Trump signed the EO, the NY Times ran a false article trying to rouse liberals against the order by saying the EO defines the Jewish people as a nation,.

One point of disagreement between Jews is whether we are just a religion or both a religion and a nation. Biblical sources define the Jews as both. One of the many biblical examples occurs In Genesis 12:2 God tells Abraham. “I will make you into a great nation.” God doesn’t tell Abraham “I will make of you a greate faith where you will have to live in a hut for a week and eat matzoh another week.”

Even the word “Jew” itself was derived from the ancient biblical Jewish nation of Judea.  There is nothing in that concept that takes away the fact that Jews in the United States are loyal Americans.

But some liberal Jews go frothing from the mouth crazy when Judaism is described as a faith and a nation, And when the Times published its fake news, they didn’t disappoint.

Sen. Richard (stolen valor) Blumenthal told CNN, “It smacks not only of what happened in the Soviet Union but also Nazi Germany,”

"Remember that in Hitler's first written comment in 1919 on the so-called Jewish Question, he likewise defined the Jews as a race and not a religious community," tweeted Jon Cooper, chair of the Democratic Coalition. https://t.co/U6t8eeT8eZ

In case you don't know about the Nuremberg Laws. You can read about them here:https://t.co/tiezhoWK68 pic.twitter.com/od6QUUJcEN

So American Jews will now be just Jews and Americans?!?
Did you ask them, donny? Did you ask the Jews if it’s ok with them ?!? Didn’t think so…

There were hundreds of other tweets by liberals criticizing Trump’s EO based on the false NY Times story.  But as the time for the time to sign the order drew near, articles began to appear identifying the NY Times story as bogus.  Even the liberal Slate Magazine called out the NY Times piece.

A bombshell report on Tuesday claiming that President Donald Trump planned to sign an executive order that interpreted Judaism “as a race or nationality” under Title VI of the Civil Rights Act of 1964. Title VI governs federally funded educational programs, so the Times warned that the order might be deployed to squelch anti-Israel speech on campus. “Mr. Trump’s order,” the Times further claimed, “will have the effect of embracing an argument that Jews are a people or a race with a collective national origin in the Middle East, like Italian Americans or Polish Americans.”

That turned out to be untrue. The text of the order, which leaked on Wednesday, does not redefine Judaism as a race or nationality. It does not claim that Jews are a nation or a different race.

I have read that so-called "Jews are a nationality" executive order, which you can read here.https://t.co/rstKoXTVs0

The New York Times completely blew this story. It does not say anything like what they claimed.

The NY Times article is another example of mainstream media fake news and paraphrasing Dr. Suess, they are the Grinch who almost stole the President Antisemitism EO.

After his Saturday Speech to the Israeli American Council radical left groups like JStreet and the Jewish Democratic Council of America falsely claimed that President Trump was bad for American Jews. Along with the examples President Trump gave during that Saturday speech,  the President’s historic executive order on Antisemitism demonstrates that he is the most pro-Jewish president in American history.

President Trump’s EO On Antisemitism by Jeffrey Dunetz on Scribd