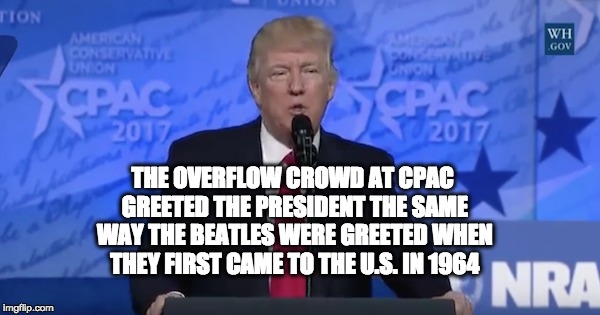 If there was any doubt what CPAC attendees thinks of President Trump it was erased the moment he walked on stage as the crowd when crazy cheering the new Commander-in-Chief.  National Harbor’s Potomac Ballroom was packed in anticipation of seeing the president. Not only was it a standing room only crowd, they took down a movable wall behind the press area and opened an entire back room for people to stand and watch.

When Pres.Trump first spoke to CPAC in 2011 the reaction was mixed. Some loved him, the Ron Paul fans hated him, and a third group was doubtful of his conservative credentials.  This time the crowed was unified in its enthusiasm for the new president.

After thanking the CPAC crowd, and reminding them that his first major political speech was to CPAC in 2011 the President lit  into the press about fake news.

CNN was lucky the president didn’t see the video story they posted last night with the headline at “CPAC conservatives cautiously embrace Trump.”  The video which can be seen here, seemed to show that attendees were fully behind the POTUS. CNN must have realized it too as the post with the same headline was taken down. The first day of CPAC the crowd cheered every time the president’s name was mentioned.

They are the worst.

(…) I would have come last year, but I was worried that I’d be at that time too controversial. We wanted border security, we wanted very, very strong military. We wanted all of the things that we’re going to get, and people consider that controversial, but you didn’t consider it controversial. So I’ve been with CPAC for a long time. All of these years we’ve been together, and now you finally have a president, finally. Took you a long time. Took you a long time. And it’s patriots like you that made it happen, believe me. You did it because you love your country, because you want a better future for your children, and because you want to make America great again.

The media didn’t think we would win. The pundits — you’re right — they had an idea. The pundits didn’t think we’d win. The consultants that suck up all that money — oh, they suck it up — they’re so good. They’re not good at politics, but they’re really good at sucking up people’s money. Especially my opponents’, because I kept them down to a minimum. But the consultants didn’t think we would win. But they all underestimated the power of the people, you, and the people proved them totally wrong. This is so true, and this is what’s been happening. Never underestimate the people. Never. I don’t think it will ever happen again.

They’re very dishonest people. In fact, in covering my comments, the dishonest media did not explain that I called the fake news the enemy of the people — the fake news. They dropped off the word “fake”. And all of a sudden the story became the media is the enemy. They take the word “fake” out. And now I’m saying, oh, no, this is no good. But that’s the way they are. So I’m not against the media, I’m not against the press. I don’t mind bad stories if I deserve them, and I tell you, I love good stories, but we won’t talk — I don’t get too many of them. But I am only against the fake news media or press. Fake. Fake. They have to leave that word.

I’m against the people that make up stories and make up sources. They shouldn’t be allowed to use sources unless they use somebody’s name. Let their name be put out there. Let their name be put out. A source says that Donald Trump is a horrible, horrible human being — let them say it to my face. Let there be no more sources. And remember this, and not in all cases. I mean, I had a story yesterday written about me in Reuters by a very honorable man that was a very fair story. There are some great reporters around, they are talented and honest as the day is long; that is great. But there are some terrible, dishonest people that do a tremendous disservice to our country, and to our people.
They are very dishonest people, and they shouldn’t use sources. They should put the name of the person. You will see stories dry up like you’ve never seen before. You have no idea how bad it is because if you are not part of the story — and I put myself in your position sometimes because many of you, you’re not part of the story — and if you’re not part of the story, you know, then you sort of know if you are part of the story, you know what they’re saying is true or not.

And the president was right. After his speech was over, my friend Peter, DaTechguy wrote:

Would you believe a guy from TBS who was filming for the Samantha Bee program asked me if I had solitaire on my computer and asked me to bring it up so he could get a shot of someone playing solitaire during Trump’s speech. HOW DARE HE! HOW DARE HE EXPECT ME TO SET UP A PHONY SHOT FOR A PHONY MEME! That’s so dishonorable!

I wonder if the TBS guy made the request as a favor because TBS is owned by the same company as CNN.

The President went on and addressed all his key issues, trade, jobs, national security, etc. But beyond the specifics, he laid out his vision for the GOP and for the country and IMHO the vision that helped him win…America First:

The GOP will be from now on the party also of the American worker. You know, we haven’t been as a group given credit for this, but if you look at how much bigger our party has gotten during this cycle, during the early days when we had 17 people running, the primaries, millions and millions of people were joining. I won’t say it was because of me, but it was, okay? And we have an amazing, strong, powerful party that truly does want to see America be great again, and it will see it, and it’s going to see it a lot sooner than you think, believe me.

A lot sooner than you think. We will not answer to donors or lobbyists or special interests, but we will serve the citizens of the United States of America, believe me. Global cooperation, dealing with other countries, getting along with other countries is good. It’s very important, but there is no such thing as a global anthem, a global currency, or a global flag. This is the United States of America that I’m representing. I’m not representing the globe. I’m representing your country.

There’s one allegiance that unites us all, and that is to America. America. It’s the allegiance to America. No matter our background or income or geography, we’re all citizens of this blessed land, and no matter our color or the blood, color of the blood we bleed, it’s the same red blood of great, great patriots. Remember great patriots. We all salute with pride the same American flag, and we all are equal, totally equal in the eyes of almighty God. We’re equal.

Thank you. And I want to thank, by the way, the evangelical community, the Christian community, communities of faith. Rabbis and priests and pastors, ministers because the support for me was a record, as you know, not only in terms of numbers of people but percentages of those numbers that voted for Trump. So I want to thank you folks. It was amazing, an amazing outpouring and I will not disappoint you. As long as we have faith in each other and trust in God, then there is no goal at all beyond our reach.

The crowd went crazy with every word, cheered every sentence, and even through in a few chants of  “U-S-A, U-S-A ” and in honor of the losing candidate there was one crowd chant of “lock her up.” This wasn’t a crowd cautiously embracing the president, this was a crowd that was “all in” supporting something they haven had in way too long….a conservative GOP president. The truth is, the crowd reaction to Trump seemed more like a crowd greeting a rock star than greeting a POTUS.

Donald Trump has been president for five weeks, long past where other people have started to break their promises. But Trump seems to have a check list of all the promises he made and is going through them a few at a time. The most important promise he is following however, is the promise of that America First vision because in a way all of his other promises stem from that one.

Below is a video of the President’s entire speech.: