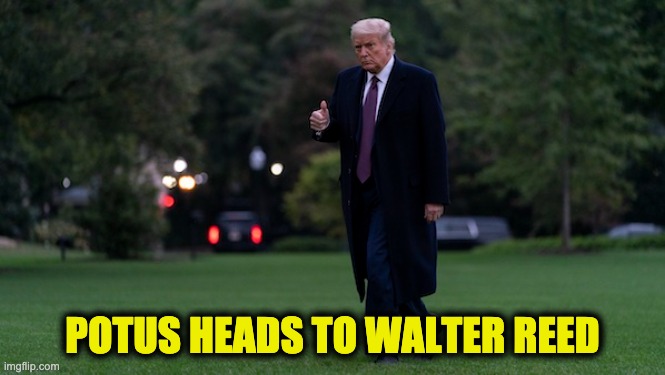 Friday morning America got a bad “October surprise.” The President and Mrs. Trump were diagnosed with COVID-19. Most public reactions, friend, or foe were sympathetic, those people offered nothing but prayers for the President and Melania. There were others, who found time to make vile “I told you so,” type statements that contained liberal lies about Trump and the Corona Virus. Lies like Donald Trump called the virus a hoax, told people to inject bleach, and/or didn’t take the China Virus seriously. Trump’s COVID-19

Speaker Pelosi says Pres. Trump’s behavior during pandemic “was a brazen invitation for something like this to happen,” adds that his positive test is "very sad" and that she's "nonetheless hopeful that it will be a transition to a saner approach to what this virus is all about.” pic.twitter.com/mLHDag0kBe

Gee, woke up this morning to learn Donald and Melania have tested positive for Covid-19. How can a HOAX infect anyone? That's a new one on me. I'm sure he's taking the Clorox cocktail, but it's so unpleasant. Thoughts and prayers.

There were many other similar statements including (sadly) Jake Tapper.  I have great respect for Jake, but no respect for this reaction:

"Make no mistake, this was not just reckless behavior, this was a demonstration of a wanton disregard for human life. President Trump, now in quarantine, has become a symbol of his own failures."

The President of the United States is ill with a serious virus, but the lies still flow.

President Trump never said the virus was a hoax. At a February 28 rally, the president  about his impeachment, calling it a “hoax” and followed by saying Democrat’s criticism of his handling of Covid-19 “their new hoax.” But the liberal media spun his words to fit their agenda. Trump’s COVID-19

Nor is the fact that the President did NOT say we should inject ourselves with disinfectant, he said the opposite. Bill Bryan, who leads the Science and Technology group at the Department of Homeland Security, talked about the findings of a scientific study they conducted indicating that the virus is killed by solar light and disinfectants. The President asked Bryan “And is there a way we can do something like that, by injection inside or almost a cleaning?  Because you see it gets in the lungs and it does a tremendous number on the lungs.  So it would be interesting to check that.  So, that, you’re going to have to use medical doctors with.  But it sounds — it sounds interesting to me.” He asked the expert and said something like that.  During the same press conference, Jonathan Karl asked Bryan if there was any scenario where cleaners could be injected? After Mr. Bryan answered Trump added “It wouldn’t be through injection.  We’re talking about through almost a cleaning, sterilization of an area.  Maybe it works, maybe it doesn’t work.  But it certainly has a big effect if it’s on a stationary object.” Trump’s COVID-19

The biggest of the Trump haters’ lies heard today was that the President never took the virus seriously. Anyone who makes that claim has no idea of what they are talking about.   Below is a timeline that proves them wrong. It runs from the announcement of the CoronaVirus on 12/31/19 to 4/13/20 when President Trump told Woodward the virus was easily transferable. The timeline will prove to you that while President Trump took the virus seriously, others, including Joe Biden and his team did not take it seriously. Trump’s COVID-19

The black text on the timeline below represents an action or announcement by Pres. Trump or part of his administration, indicating the seriousness of Covid-19 (this does not represent all their actions or statements). The brown text describes actions/statements by Democrats, WHO, and Woodward’s question answers. Trump’s COVID-19