Have Genuine Confidence Pandemic Will Be Over ‘Far Sooner’ Than Expected 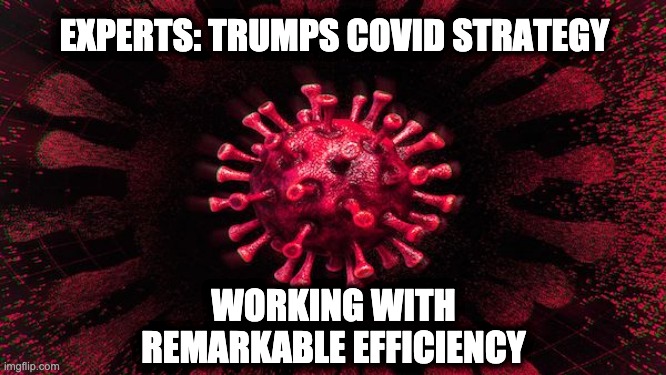 A brand new report published by the New York Times states that experts have “genuine confidence” that the nightmare that is the coronavirus pandemic will be brought to an end “far sooner” than was originally expected. If the fact this piece was published in the NYT is enough to make you nearly have a heart attack, that same report also says these experts believe that President Trump’s Operation Warp Speed has been “working with remarkable efficiency.”  Trump’s COVID strategy working

The report was published on Monday and comes as just three weeks are left in the extremely contentious presidential race between Trump and former Vice President Joe Biden.

“Events have moved faster than I thought possible. I have become cautiously optimistic,” New York Times science reporter Donald McNeil Jr. wrote. “Experts are saying, with genuine confidence, that the pandemic in the United States will be over far sooner than they expected, possibly by the middle of next year.”

The report noted that the U.S. was “faring much better than it did during the Spanish influenza,” which cost 675,000 Americans their lives, adding, “the country’s population at the time was 103 million, so that toll is equivalent to 2 million dead today.”

The Trump campaign would be wise to cite this NYT story as part of its closing message — particularly the success of Operation Warp Speed. pic.twitter.com/cSN8vYlkxT

Yes, we are talking about THAT NY Times.

The report noted numerous positive developments that have come along the way as the U.S. battles the pandemic, ranging from the average age of those being infected being significantly younger now than at the start of the pandemic to nursing homes becoming better at protecting their patients.

“Sometime in the next three months, health experts say, the F.D.A. is likely to begin granting approval to vaccines now in the works,” the report notes. “Despite the chaos in day-to-day politics and the fighting over issues like masks and lockdowns, Operation Warp Speed — the government’s agreement to subsidize vaccine companies’ clinical trials and manufacturing costs — appears to have been working with remarkable efficiency. It has put more than $11 billion into seven vaccine candidates, and the F.D.A. has said it will approve any one of them that is at least 50 percent effective at preventing infection or reducing its severity.”

The report also discusses how Operation Warp Speed’s chief scientific adviser, Moncef Slaoui, believes that a large percentage — 75 to 90 percent — of the early vaccine candidates will be effective and that at least two of them will have been approved by January.

“By then, Dr. Slaoui has estimated, the factories under contract will have produced enough vaccine for 30 to 40 million people, and then another 80 to 90 million people every month after that,” the piece says. “Assuming nothing goes wrong, he said, there will be enough doses for all 330 million Americans to be vaccinated by next June.”

The report notes that the U.S. military is at the ready to help distribute the vaccine to ensure there are plenty of doses of it to go around and that the population is inoculated against the illness. At least those willing to take it that is. With the Democratic Party candidates expressing their skepticism about the pending vaccines, there may be some who are unwilling to protect themselves. However, the vast majority of Americans will agree with the science should the F.D.A. approve any vaccines.