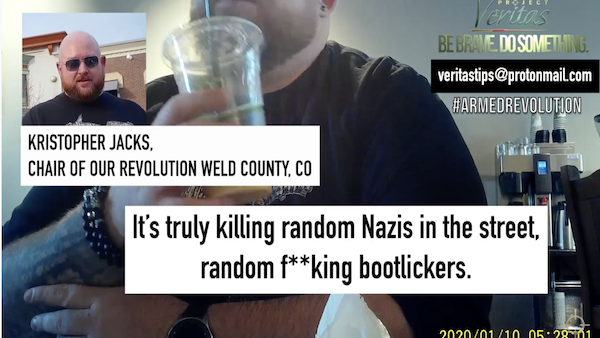 Ah, for the good old days. Today a member of the Colorado Democratic committee can threaten to threaten violence and murder if Trump wins, or as he said,  “Guillotines, motherf*cker.” I’m old enough to remember when New York Times op-ed writer Paul Krugman warned his readers of the violence to come … from the Right. “[T]there’s room in a democracy for people who ridicule and denounce those who disagree with them,” he wrote on Jan. 9, 2011, adding: Trump win democrat promises violence

[T]here isn’t any place for eliminationist rhetoric, for suggestions that those on the other side of a debate must be removed from that debate by whatever means necessary.

And it’s the saturation of our political discourse — and especially our airwaves — with eliminationist rhetoric that lies behind the rising tide of violence.

Where’s that toxic rhetoric coming from? Let’s not make a false pretense of balance: it’s coming, overwhelmingly, from the right. It’s hard to imagine a Democratic member of Congress urging constituents to be “armed and dangerous” without being ostracized. …

Paul, meet Kristopher Jacks, a member of the executive committee of the Colorado Democratic Party. On Tuesday, James O’Keefe’s Project Veritas released a shocking video in which Jacks saw Krugman’s bet and went all in:

I think the right wing has a monopoly right now on strong, violent rhetoric, and I think they underestimate how many people on the left are organized, trained, armed, and ready to go should they decide to do their sh*t. And I think all it will take is our numbers and a reminder that yeah, there’s a reason you guys feared the Communists more than you feared the Nazis. … We have the army already. We’re gonna show up in numbers. We’re gonna show up en masse.

When asked about his plans in the event Donald Trump wins re-election in November, he said:

I’m gonna be in my garage, right next to my gun safe, all night long, on the 3rd, because that is how seriously I take this stuff. … You really want to change this country that way, with violence, there’s only one way to do it. You gotta get people that are close to billionaires and start just, random billionaires start turning up dead. And nobody knows what the f*ck’s going on. Nobody knows. Nope, I don’t know. They just turned up dead. And just three or four of ‘em is all it’s going to take. All it’s going to take is a pattern of I don’t know, I don’t know, man. I don’t know what happened. Just showed up that way. I walked in. That’s how it was. That’s the only way that’s, you do that to three or four people enough to say that this is a pattern, and this is why – draw a dollar sign on their desk or whatever you do, that’s what it’s going to take. It’s going to take a strategic hit against the 0.1% that’s in charge, cause that’s who it is. Killing random Nazis in the street, random f*cking bootlickers.

Watch the video of Kristopher Jacks below, and then go out and make sure that Trump wins.

Update: On October 15th,  Kristopher Jacks was fired from his with CenturyLink, an American telecommunications company that services the Denver area.