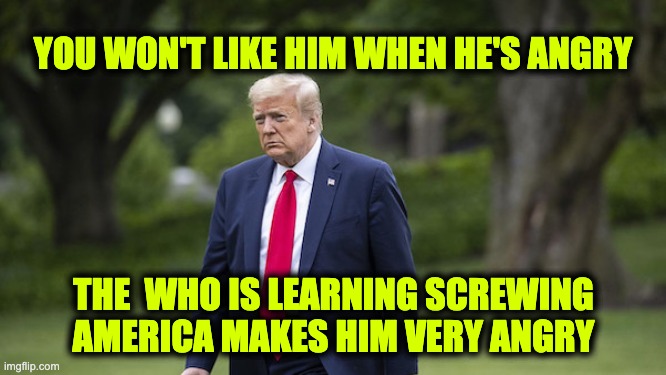 President Trump sent a letter to the WHO demonstrating that part of his “America First” policy is you don’t screw around with America.

What, you didn’t think ‘America First’ was just a slick catch-phrase, did you? He’s a marketer. It was branding… a promise of the course he planned to chart as President. The difference is, unlike so many previous Presidents, Trump doesn’t make false promises, he follows through with his threats.

America First — contrary to all the myths, media hyperbole, and outrageous lies, it has been smeared with isn’t really all that complicated. The plans and policies put in place would be measured against a simple criterion. ‘Is (x) good for the country either directly or indirectly?’ If the answer is ‘no,’ then (x) is NOT a priority worth doing.  And a subset of that policy is, “did you hurt America, or mistreat her?” then you will change, or you will pay.

We’re at the point where we have put the WHO on the balance scale (that’s the World Health Organization, not the rock band The Who. They are in their mid-70s and at the age of being high risk for China Virus). Is the US relationship with the WHO  worth keeping? Does funding it fit with our goals and values? Or have they just spouted Chinese Communist propaganda on command?

The President’s key problems with the WHO as outlined in his threatening letter are:

He warned the WHO if within the next 30 days they don’t make a serious effort to clean up their act, the temporary freeze of funds enacted a few weeks ago will be permanent.

I would suggest to the WHO they remember another of President Trump’s slogans, “Promises made, promises kept.”

Trump slipped the whole letter to the WHO into a tweet…

This is the letter sent to Dr. Tedros of the World Health Organization. It is self-explanatory! pic.twitter.com/pF2kzPUpDv

But to make it easier for us in the high-risk Wuhan Virus category, you can read the whole thing below.

Notice it is addressed directly to the Director-General of WHO Dr. Tedros Adhanom Ghebreyesus, who in the 1990s was part of a Marxist terror group, and eventually got his Director-General job thanks to the Chinese Communists bribing the organization. …perhaps that’s why he has become a mouthpiece for China. Putting it all together as a Marxist and former terrorist, Dr. Tedros would not be President Trump’s kind of guy. But throw in the fact that he screws the US, which provides the most funds by far to the WHO, and covers up for Communist China who provides much less money, one can understand the Presidental tone of this letter. 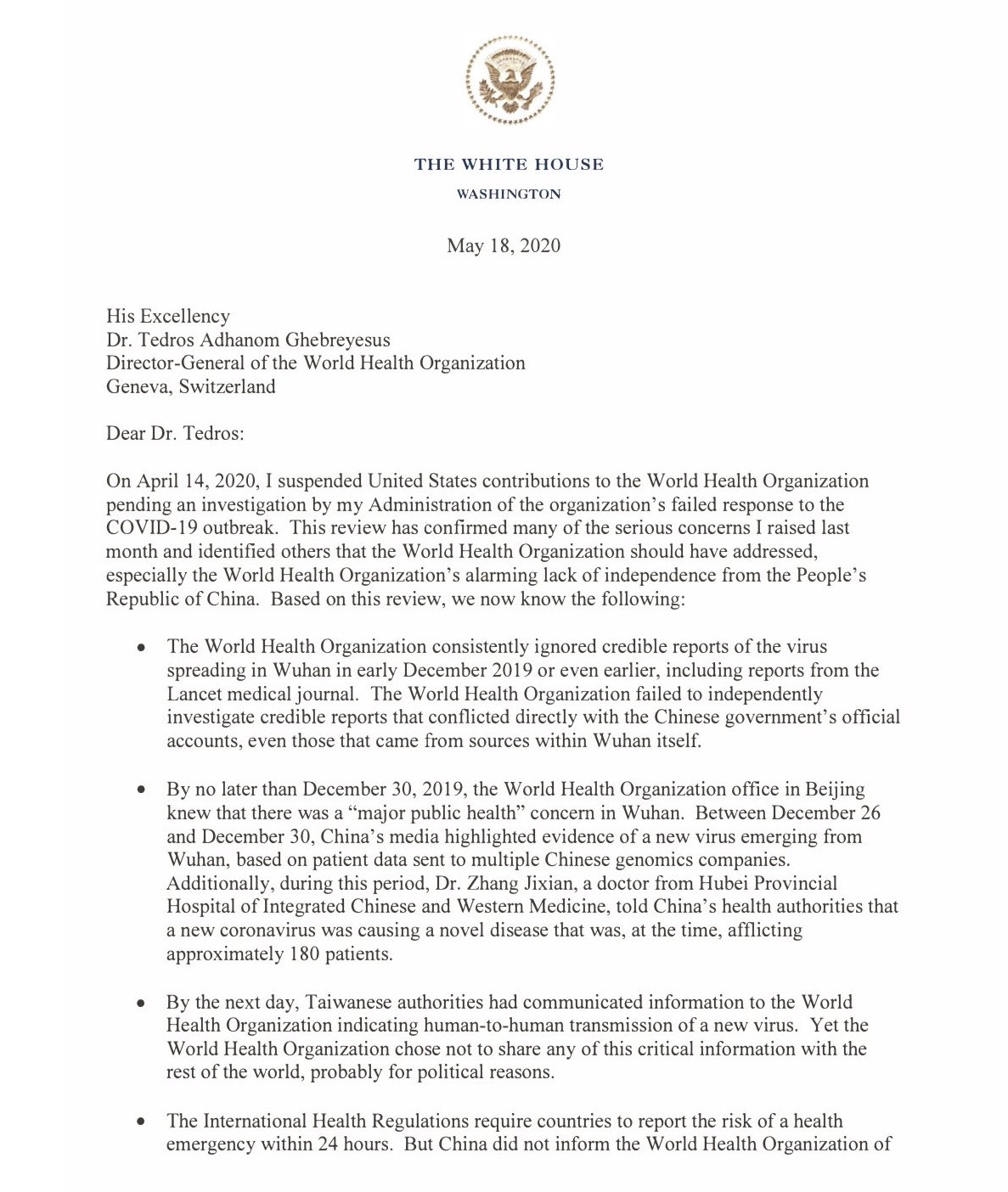 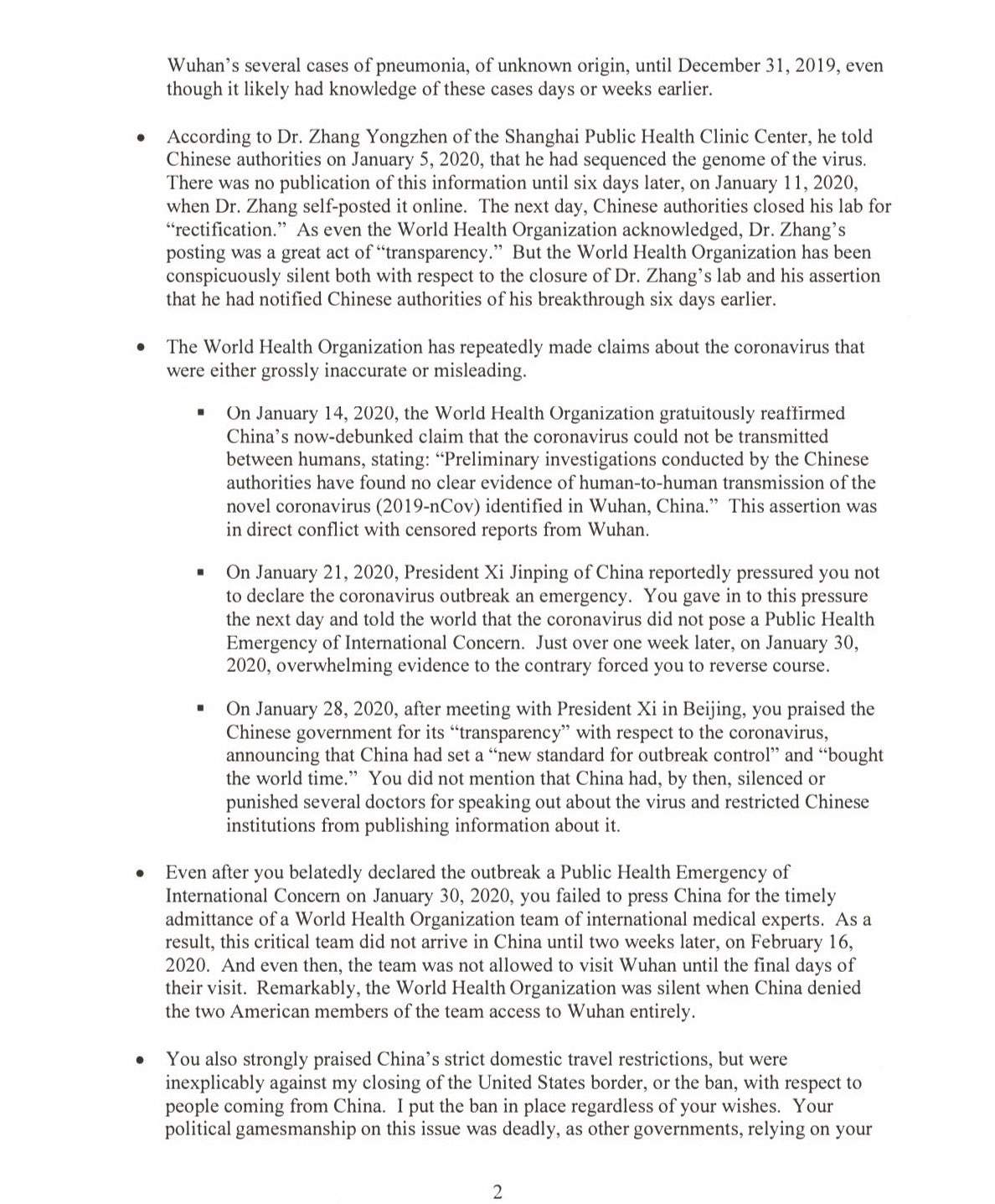 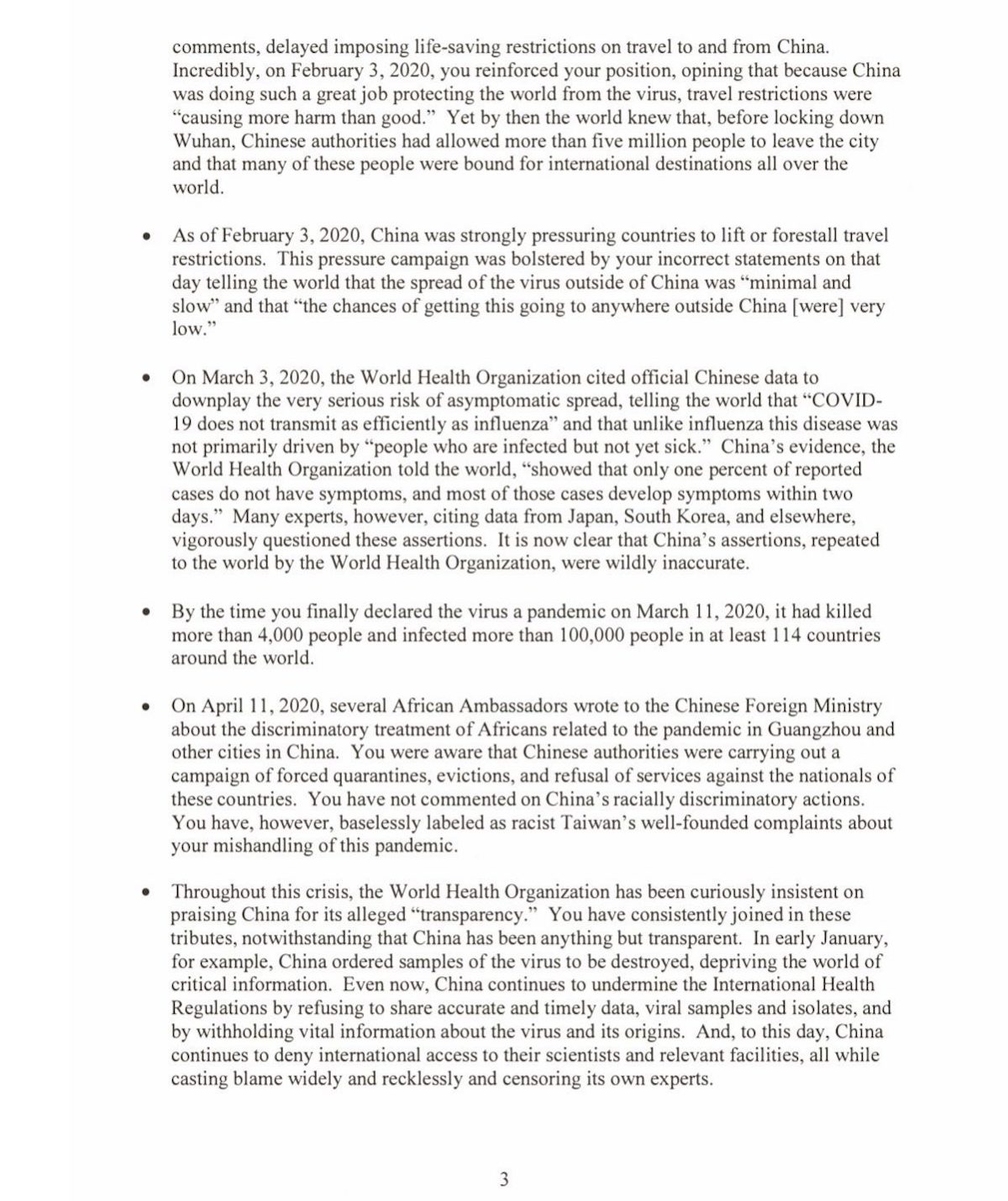 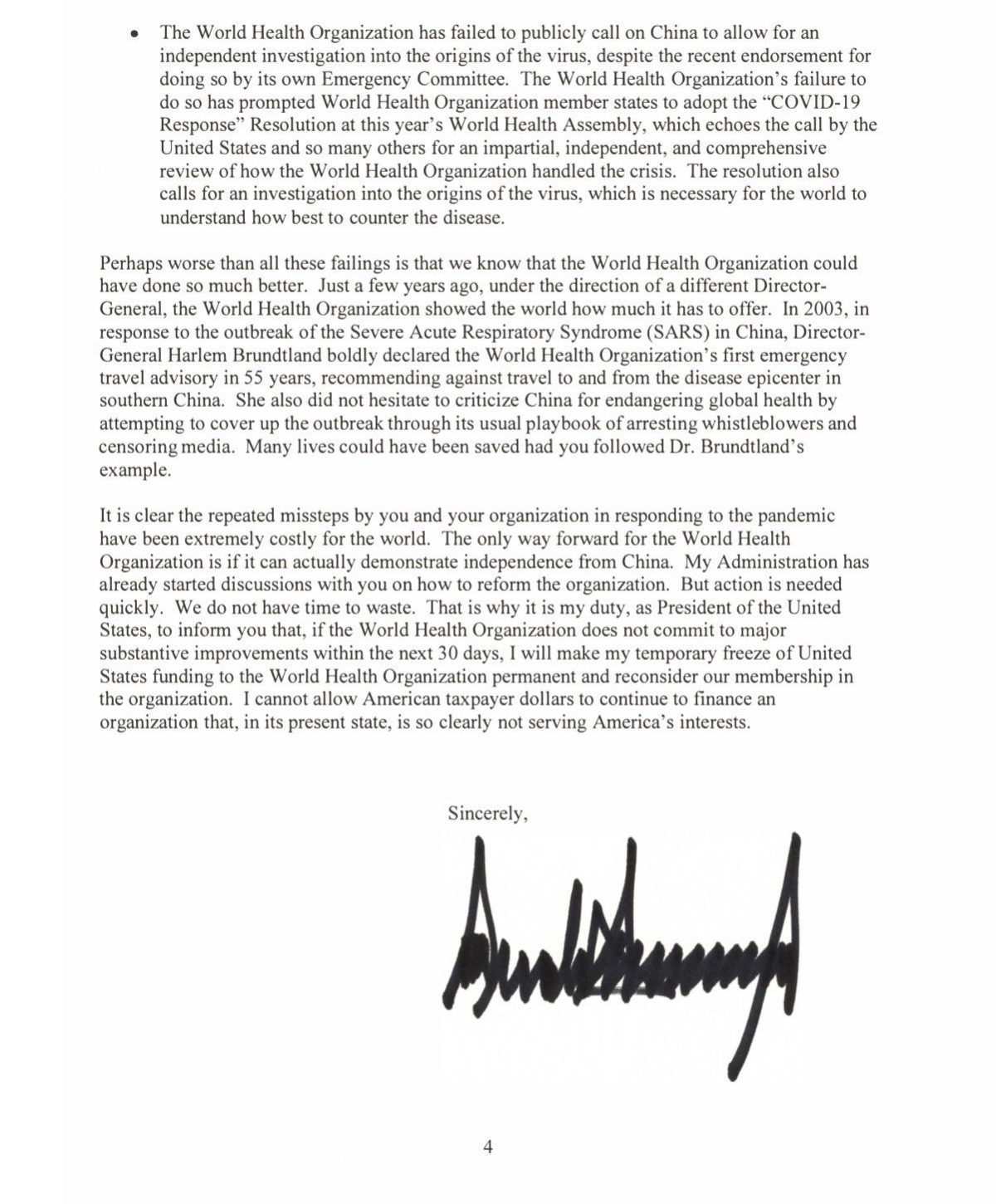 The WHO had relevant information before the New Year. But they didn’t share it with the world, despite an obligation to share it within 24hr.

China closed the lab that had sequenced the COVID genome by January 5 and suppressed that they had sequenced it until January 11, when Doctor Zhang announced it online himself.

The official January 14 WHO announcement that Wuhan Virus was not spread person to person was directly conflicting with censored reports from Wuhan. Travel restrictions that might have helped curb the international spread were denounced by the WHO, and there was no official recognition of a pandemic until 114 countries, and over 100,000 people were affected. By this point, there had already been at least 4000 official fatalities.

Thanks to the loyalty of its Director-General, the WHO is a de facto puppet of the Chinese Communist Party, we have no reason to see it as credible or even useful, and unless it changes the way it operates, President Trump is correct in not sending money that way.

They will need to decide where their loyalties are and choose accordingly.

If WHO’s interests continued to be aligned AGAINST ours, and not with them, we have no reason to be participating in it. 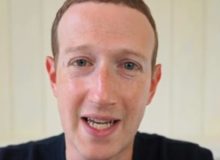