A Deal "Sleepy Joe" Couldn't Have Made 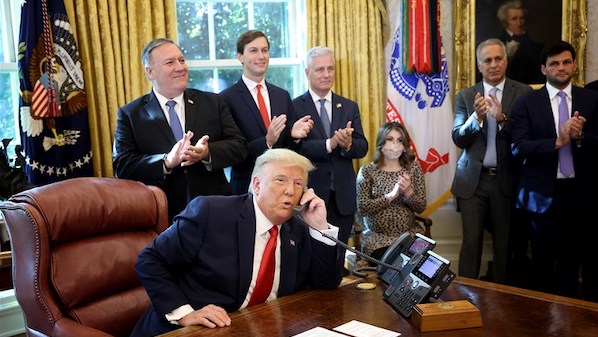 President Trump today announced he has mediated the third peace deal between Israel and one of her Muslim neighbors since mid-August 2020. Sudan now joins the U.A.E. and Bahrain in establishing relations with the Jewish State thanks to a Trump brokered peace deal. Trump Sudan Israel

During a call with Prime Minister Benjamin Netanyahu, Sudan Sovereign Council president General Abdel Fattah al-Burhan and Sudanese Prime Minister Abdalla Hamdok, Trump brought reporters into the Oval Office and announced: “The State of Israel and the Republic of Sudan have agreed to make peace.”

This is one of the great days in the history of Sudan,” Trump said, adding that Israel and Sudan have been in a state of war for decades. “It is a new world,” Netanyahu said over the phone as Trump took questions from the White House press corps in the Oval Office. “We are cooperating with everyone. Building a better future for all of us.”

This agreement had been rumored for days as the state department moved to remove Sudan from the state sponsors of terrorism list. Per Trump’s comments to the press, part of the deal was that Sudan had to pay reparations to American victims of their terrorism.

Interestingly Trump asked Netanyahu if he thought Joe Biden could have made this deal. As he doesn’t get involved with American elections, Bibi side-stepped the question. But the truth is that Biden couldn’t have made the deal.

In January, the President introduced the “deal of the century,” A plan designed to make peace between Israel and the Palestinians. It was more than a peace plan because, in a way, it “set up” the Palestinians. Trump knew the deal could have two results:

Trump correctly figured out that the moderate Arab States were tiring of the Palestinians refusal to even try to make peace.  They were tired of carrying the Palestinians, and many of the moderate states were already dealing with Israel behind the scenes. The ones already working with Israel were the Sunni-led states such as the UAE, Bahrain, Sudan (and the Saudis) because of their fear of Shia Iran.

By pulling out of the Iran nuke deal (the JCPOA) and pressuring Iran with increased sanctions, Trump proved to the Sunni countries that unlike Obama, he had their back against Iran.  Candidate Biden has promised to go back into the JCPOA and normalize relations with Iran.

Before these deals could be made, Jerusalem had to be recognized as Israel’s capital.  Trump recognized Jerusalem as Israel’s capital and moved the U.S. embassy there. What this move accomplished was to take the religious component out of the equation.  The Arab States who made peace would not be conceding the Muslim’s third holiest city to Israel, now that it’s a done deal.

Another move that Trump had to make before mediating these peace deals was making America energy independent.  With that independence, no oil-producing nation could claim economic leverage over the United States. Biden has promised to stop all fossil fuel production in America.

Today’s announcement was part of President Trump’s vision of the Middle-East, or as he said during today’s announcement, “Ultimately they’ll all be one unified family. It’ll be an amazing thing. Probably has never happened in the Middle East.” He added, “ultimately we’re going to have a big reunion at the end where everybody’s here, and everybody’s gonna be signed. We expect Saudi Arabi is going to be one of those countries.”

That sounds like a heck of a party. However, if Trump doesn’t win reelection, the party won’t happen because the peace won’t happen.

Making this deal even more significant from a symbolic point of view is that on Sept. 1, 1967, the Arab League summit convened in the wake of the Six-Day War. They met in the Sudan capital, Khartoum. The summit issued the now-infamous “Khartoum Resolution,” also known as “The Three Nos” which got its name from the 3rd paragraph of the resolution which long dictated Arab attitudes toward Israel.

The Arab Heads of State have agreed to unite their political efforts at the international and diplomatic level to eliminate the effects of the aggression and to ensure the withdrawal of the aggressive Israeli forces from the Arab lands which have been occupied since the aggression of June 5. This will be done within the framework of the main principles by which the Arab States abide, namely, no peace with Israel, no recognition of Israel, no negotiations with it, and insistence on the rights of the Palestinian people in their own country.

Thanks to President Trump there is better news coming from Khartoum.

Below is the joint statement announcing the U.S./Sudan/Israel deal.

After decades of living under a brutal dictatorship, the people of Sudan are finally taking charge.  The Sudanese transitional government has demonstrated its courage and commitment to combating terrorism, building its democratic institutions, and improving its relations with its neighbors.  In light of this historic progress, and following President Trump’s decision to remove Sudan from the State Sponsors of Terrorism list, the United States and Israel agreed to partner with Sudan in its new start and ensure that it is fully integrated into the international community.  The United States will take steps to restore Sudan’s sovereign immunity and to engage its international partners to reduce Sudan’s debt burdens, including advancing discussions on debt forgiveness consistent with the Highly Indebted Poor Countries Initiative.  The United States and Israel also committed to working with their partners to support the people of Sudan in strengthening their democracy, improving food security, countering terrorism and extremism, and tapping into their economic potential.

The leaders agreed to the normalization of relations between Sudan and Israel and to end the state of belligerence between their nations.  In addition, the leaders agreed to begin economic and trade relations, with an initial focus on agriculture.  The leaders also agreed that delegations will meet in the coming weeks to negotiate agreements of cooperation in those areas as well as in agriculture technology, aviation, migration issues, and other areas for the benefit of the two peoples.  The leaders also resolved to work together to build a better future and advance the cause of peace in the region.  This move will improve regional security and unlock new opportunities for the people of Sudan, Israel, the Middle East, and Africa.

This historic agreement is a testament to the bold and visionary approach of the four leaders.  Prime Minister Netanyahu, Chairman al-Burhan, and Prime Minister Hamdok expressed their appreciation for President Trump for his pragmatic and unique approach to ending old conflicts and building a future of peace and opportunity for all the people of the region.

The Vaccinated are the REAL Super Spreaders
The Black Sphere