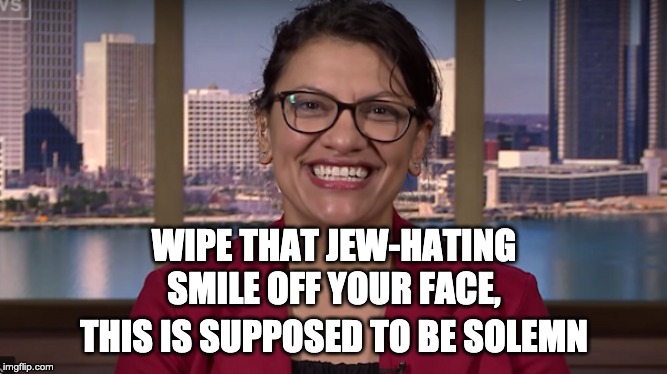 President Trump justifiably lashed out at Michigan Rep. Rashida Tlaib after she posted a video that shows her acting giddy on her way to Wednesday’s impeachment vote. Trump slammed Tlaib

Tlaib, one of the few members of Congress to admit she had designs on impeaching President Trump on day one, can be seen heading to the vote with a spring in her anti-Semitic step and an ear-to-ear grin.

“Hi, everyone. I am on my way to the United States House floor to impeach President Trump on behalf of my incredible district, 13th District strong,” Tlaib said flashing a bright ruby red-lipped Israel hating smile. “Let’s do it.”

The clip almost makes it seem like Democrats aren’t really serious when they tell us this was a ‘sad’ and ‘somber’ day.

Tlaib voted yes to both articles.

It’s no surprise that Tlaib, the woman who screeched in front of her supporters on the day she was sworn into office that she was going to “impeach the motherf*****,” would be acting like a child on Christmas morning.

What is surprising, however, is that House Speaker Nancy Pelosi tried to cover up the jubilation by telling her Democrat colleagues that they needed to act somber during the process. To dress in funeral black, instructing them to avoid “cheering” and to “keep it solemn” during the impeachment vote. And when they started to cheer Pelosi gave them a parental “stink eye”

It’s clear they weren’t serious. President Trump called them out for it.

“This is what the Dems are dealing with,” he wrote, sharing the clip on social media. “Does anyone think this is good for the USA!”

This is what the Dems are dealing with. Does anyone think this is good for the USA! https://t.co/rvY3mDo69r

Tlaib – NOT Good for the USA

This isn’t the first time President Trump has reacted to a video showing Tlaib to be a bit of an emotional wreck, embarrassing to the office she holds.

Another viral video surfaced this past summer showing the impeachment-loving Democrat being forcibly dragged out of a Trump campaign event in 2016 by Secret Service agents.

This is what we in the biz call, “frothing from the mouth crazy anti-Semite”

The President concurred, suggesting Tlaib is “a crazed lunatic.”

“She’s like a crazed lunatic. She’s screaming just before she got into Congress. Who elected her?” he asked. “She’s screaming like a total lunatic at one of our rallies.”

Now she’s sporting an unhinged smile the Joker would be envious of as she votes to impeach the President she has tried to impeach since before he was elected 2016.