The Democrats Won’t Admit It, But The Trump-Putin Meeting Was A Success 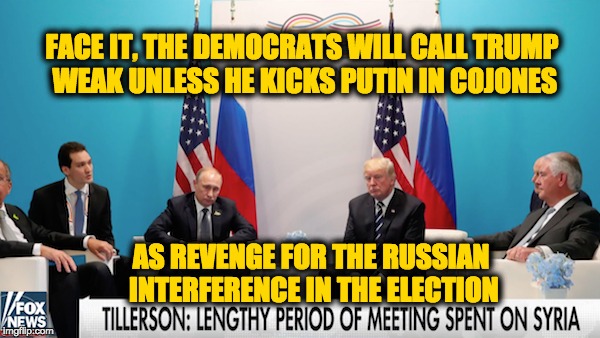 Let’s be honest, the Democrats would have considered anything short of President Trump physically assaulting Russian president Putin as a disastrous presidential performance in Friday’s meeting between the two leaders.

President Trump did not punch out the Russian leader nor did he twist Putin’s arm behind his back until the Russian admitted the election interference and cried uncle. However he did press him on  Russian interference in the 2016 American election, and was supposed to be a 30-45 minute meeting lasted 135 minutes. the meeting ran so long that at one point  First Lady Melania Trump poked her head into the meeting to try to get her husband  back on his schedule. Per Secretary of State Tillerson, It didn’t work; the meeting continued for another hour.

The first encounter between the new US President and the Russian leader seemed to be a success; it resulted in a path forward in Syria, steps to avoid any new Russian interference in elections, began a discussion of North Korea, and it was the beginning of a relationship between the two leaders (an important step for the two biggest nuclear powers in the world).

Trump began the meeting with a discussion about Russian interference with the election. As Tillerson explained in his post-meeting presser:

The president opened the meeting with president Putin by raising the concerns of the American people regarding Russian interference in the 2016 election. They had a very robust and lengthy exchange on the subject. The president pressed president Putin on more than one occasion regarding Russian involvement. President Putin denied such involvement as I think he has in the past. The leaders agree that this is a substantial issue in the ability to move the Russia-U.S. relationship forward and agreed to exchange further work regarding commitments of noninterference and affairs of the United States and our democratic process as well as other countries.

When asked if the President laid out consequences should the Russians try to interfere with our electoral system again, Tillerson added:

The president took note of actions that have been discussed by congress, to make it clear as
to the seriousness of the issue. I think what the president’s– I think rightly focused on is how you move forward, how do we move forward from here?

It is not clear to me that we will ever come to some agreed-upon resolution of that question between the nations. The question is, what do we do now? I think the relationship and the president made this clear as well. It is too important to not find a way to move forward. Not dismissing the issue in any way, I don’t want to leave you with that impression. That is why we have agreed to continue engagement and discussion around how we secure a commitment the Russian government has no intention of. and will not interfere in our affairs and the affairs of others. How do we create a framework in which we have some capability to judge what is happening in the world and who to hold accountable?

This is obviously an issue that is just broader with the U.S. And Russia but certainly we see a manifestation of that threat and the events of last year. I think the president is rightly focused on how we move forward from what may be disagreement at this point.

In other words rather than spending the rest of their meeting with Trump saying “yes you did,” and Putin countering “no I didn’t,” the two moved on to discuss how to proceed from there. The two sides did agree to set up a working group begin the framework agreement around the cyber issue and the issue of of noninterference in internal affairs. Also Putin asked to see the US proof of Russian interference, and Tillerson promised him a response from America’s national security agencies.

According to Tillerson, much of the discussion centered on Syria and after the meeting he announced a ceasefire in southwestern Syria that was reached by Russia, the United States and Jordan, the bulk of which must have been negotiated before Friday’s Meeting.

The Secretary of State explained:

(…)  I think all of you have seen some of the news that just broke regarding de-escalation agreement, a memorandum which was agreed between the United States, Russia, and Jordan.

An area in southwest Syria affects Jordan’s security, but also a very complicated part of the Syrian battlefield. This de-escalation was agreed– well-defined agreements on who will secure this area, a cease-fire has been introduced and I think this is our first indication of the U.S. And Russia being able to work together in Syria.

And as a result of that, we had a very lengthy discussion regarding other areas in Syria we can continue to work together on to de-escalate the areas and the violence once we defeat ISIS. And to work together towards a political process that will secure the future of the Syrian people.

The leaders also discussed what will happen in Syria once ISIS is defeated (a goal of both countries), and how the peace will be maintained once ISIS is gone, however agreement was not reached. There will be further meetings to work these details out.  The important part is that Russia and the U.S. took first steps toward solving the issue.

With regards to the country led by the short chubby despot with a crappy hair-do, Tillerson said that both sides have the same goal–a nuclear free Korean peninsula. Apparently the Russians and Chinese want the North Koreans to freeze their program. President Trump however, refused to roll-over and insists that North Korea’s role-poly tyrant roll back his nuclear program. That too will require more talks.

Here’s the part that wont be covered. According to reports, the two leaders made a personal connection. Per Tillerson

As to the nature of the two hours and 15 minutes, first, let me characterize that the meeting was very constructive, the two leaders, I would say they connected very quickly. There was a very clear positive chemistry between the two.

I think again, and I think the positive thing I observed, and I have had many meetings with president Putin before, there was not a lot of re-litigating of the past. I think both of the leaders I feel like there’s a lot of things in the past that both of us are unhappy about. We are unhappy they are unhappy, I think the perspective of both of them was this is a really important relationship, the two largest nuclear powers in the world, it is a really important relationship, how do we start  making this work? How do we live with one another, how do we work with one another?

We simply have to find a way to go forward, and I think that was expressed over and over, multiple times. I think by both of the presidents, it is a very complicated relationship because I have heard so many issues on it. And one of the reasons it took a long time I think, is because once they met and got acquainted with one another fairly quickly, there was so much to talk about.

As someone who spent thirty years negotiating for a living, without some sort of personal relationship there cannot be a successful negotiation. What happened on Friday was the two sides got to know each other, and explored their common interests. Yes they disagree on whether Russia interfered in the election, the strategy to reign in Kim Jung Un’s North Korea, and survival of the Assad regime in Syria but once they establish a relationship, they can start looking at common interests and begin moving forward and take concrete actions. And despite the reactions that will most certainly come from the Democrats who care more about opposing this president than the future of this country, there is now way to move ahead if the two parties spend their time on the past.  That doesn’t mean Trump has to capitulate the way Obama did to Russia during his presidency (the new START agreement and dumping the ‘star wars’ program) a true foreign policy leader will see where there is agreement and move toward a goal that will help America

Trump set up this meeting perfectly. Obviously with much preparation  (also a key element in a successful negotiation) but the effect of speech Trump made in Poland cannot be discounted. His closing words to the Polish people was a message to Putin AND a message to ISIS

Our own fight for the West does not begin on the battlefield — it begins with our minds, our wills, and our souls. Today, the ties that unite our civilization are no less vital, and demand no less defense, than that bare shred of land on which the hope of Poland once totally rested. Our freedom, our civilization, and our survival depend on these bonds of history, culture, and memory.

And today as ever, Poland is in our heart, and its people are in that fight. Just as Poland could not be broken, I declare today for the world to hear that the West will never, ever be broken. Our values will prevail. Our people will thrive. And our civilization will triumph.

So, together, let us all fight like the Poles — for family, for freedom, for country, and for God.

Thank you. God bless you. Thank you very much

So far President Trump’s European Trip including his meeting with President Putin has been a YUGE success.