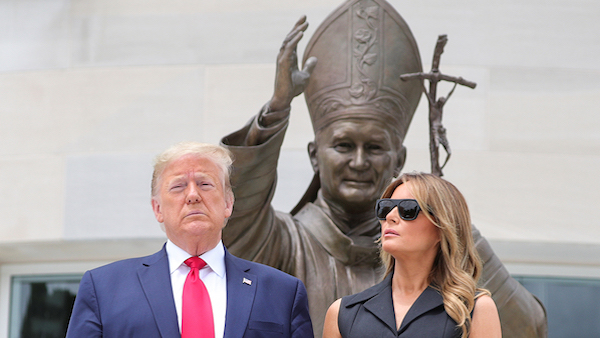 Religious freedom for all people worldwide is a foreign policy priority of the United States, and the United States will respect and vigorously promote this freedom.  As stated in the 2017 National Security Strategy, our Founders understood religious freedom not as a creation of the state, but as a gift of God to every person and a right that is fundamental for the flourishing of our society.

The operational parts of the order include:

Trump has already tried to advance religious freedom here and overseas. For example,

And my personal favorite, he signed an executive order (E.O.) that broadened the federal definition of Antisemitism and ensure Jews protections against discrimination included in Title VI of the Civil Rights Act.

The President didn’t sign the E.O. in a big signing ceremony, as one can see by VP Pence’s tweet.

Proud to stand with President @realDonaldTrump today as he continued to take decisive action to promote Religious Freedom around the world. We will always stand for the First Freedom, the freedom of religion of every person of every faith. pic.twitter.com/fjZWPbPTyn

The date for signing the I.O. and the visit to the Saint John Paul II National Shrine earlier that day was timed to the anniversary of Pope John Paul II first trip to Poland as Pope in 1979. The staunchly anti-communist pope received a hero’s welcome in the very Catholic Poland, his native country still under the thumb of the USSR. Some credited this trip with emboldening Poles to oppose their Communist government; the Solidarity labor movement, which was the first chink in the Iron certain, was founded a year later.

The document intends to enforce the Trump administration’s advocacy for religious minorities abroad.

“The president was clear when he called upon ‘the nations of the world to end religious persecution,’” the official said. “This executive order fully integrates the president’s vision — a vigorous defense of International Religious Freedom rights for all — into key aspects of United States foreign policy.”

They added: “Yet again, President Trump is taking a decisive action to keep his promise to people of faith around the world.”