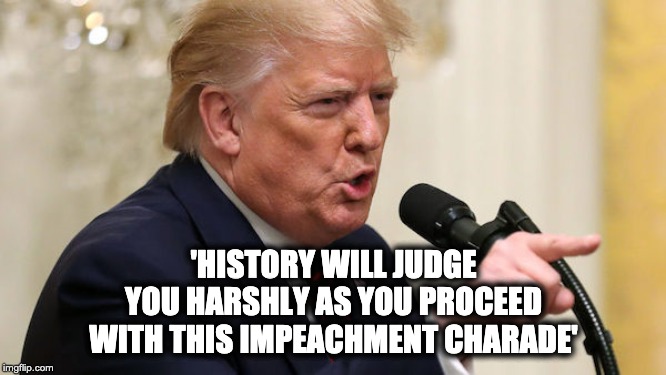 The day before the House votes on the fake articles of impeachment,  President Trump smacked down Speaker Pelosi with a scathing 6-page letter (embedded below). Blasting Pelosi for attempting a coup, violating her oath of office, warning that history will judge her harshly and much, much, more.  It’s the kind of letter that Trump fans will stand up and cheer after reading.

The President justifiably accused Pelosi’s house Democrats of ignoring due process,   “More due process was afforded to those accused in the Salem Witch Trials,” Trump also talked about Muller investigation of the Russia hoax. And something I assume was most important, how they went after his family.

“After three years of unfair and unwarranted investigations, 45 million dollars spent, 18 angry Democrat prosecutors, the entire force of the FBI, headed by leadership now proven to be totally incompetent and corrupt, you have found NOTHING!” Trump wrote.

“Few people in high position could have endured or passed the test. You do not know, nor do you care, the great damage and hurt you have inflicted upon wonderful and loving members of my family,

That was the nice part. In the letter, President Trump gives Pelosi the evisceration she deserves:

By proceeding with your invalid impeachment, you are violating your oaths of office, you are breaking your allegiance to the Constitution, and you are declaring open war on American Democracy.

Later in the letter, he warns Pelosi:

This is nothing more than an illegal, partisan attempted coup that will, based on recent sentiment, badly fail at the voting both. You are not just after me, as President, you are after the entire Republican Party,” Trump wrote. “History will judge you harshly as you proceed with this impeachment charade.”

“I have no doubt the American people will hold you and the Democrats fully responsible in the upcoming 2020 election. They will not soon forgive your perversion of justice and abuse of power,”

Trump’s letter is a justified show of anger and defiance and a must-read. The only thing missing was a picture of him flipping Pelosi the bird. I supposed the text of the letter did that.

After he leaves office in January 2025 do you think I can get President Trump to write some F-U letters for me?

The full letter is embedded below:

Letter From President Trump by Jeffrey Dunetz on Scribd