NYU Professor: Trump And Outdated Constitution Are Threats To Liberal Democracy In The U.S. 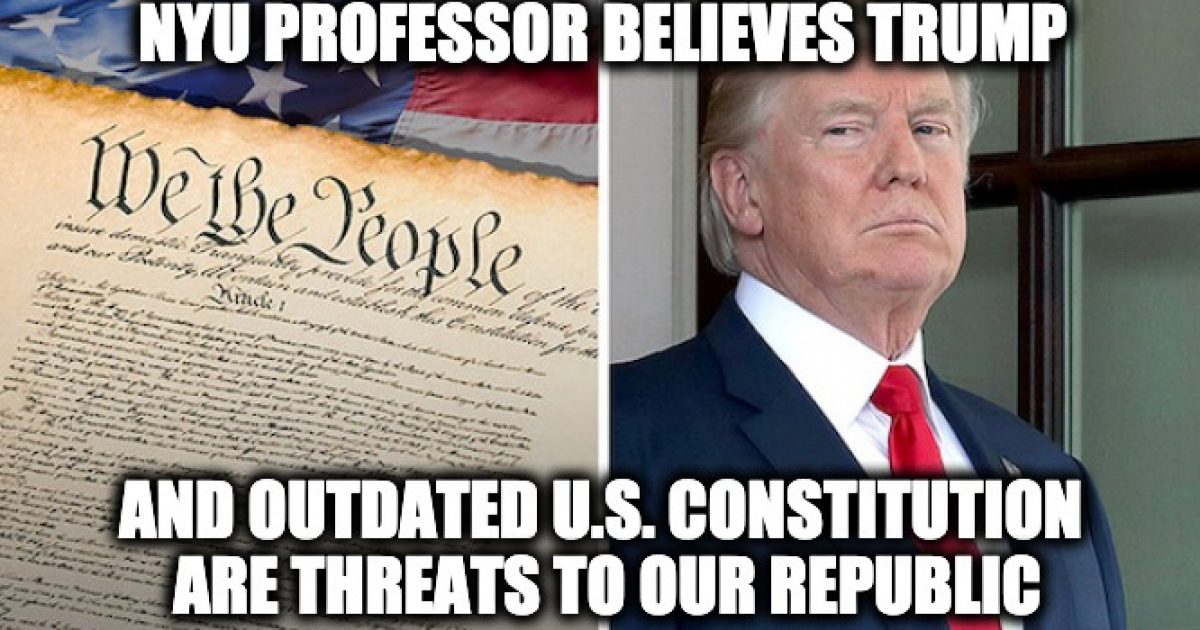 Another example of the education our American youth is receiving when they get to College. On Wednesday, Jay Rosen, a professor of journalism at NYU, issued a tweet linking to an article at NY Mag by Eric Levitz calling President Trump and the “outdated” Constitution “threats to liberal democracy in the United States.” (Note: the term liberal democracy refers to a representative government. A republic is a form of liberal democracy)

More than a professor of Journalism, Rosen is a liberal media critic and writer who often writes for the Huffington Post.

According to the  NY Mag article Rosen tweeted out, the Constitution isn’t just “outdated,” it’s “archaic.”

In sum: The man tasked with executing the laws of our country has no respect for them, and Congress is unwilling to do anything about that because our archaic Constitution was not designed to accommodate political parties of any kind — let alone polarized, ideologically coherent parties — and so the structure of our government has lost its rational basis, and is slouching toward a constitutional crisis.

But our national security agencies and major newspapers cannot report that the sitting president, his party, and the outdated Constitution that undergirds their rule have become threats to liberal democracy in the United States.

So, according to these two individuals, the Constitution is “archaic” and “outdated.”  No doubt because Donald Trump is in power.

"Our national security agencies and major newspapers cannot report that the sitting president, his party, and the outdated Constitution that undergirds their rule have become threats to liberal democracy in the United States." https://t.co/VkY0KznpaR

The reaction was pretty much what you’d expect.

Translation..you hayseeds in flyover country, just do what we tell you. You don’t deserve equal representation in our government.

So, what part of the Constitution is “outdated” and “archaic?” Is it the part that enumerates certain guaranteed freedoms? You know, like the right to free speech, or the right to keep and bear arms? We’re not really sure, because Levitz doesn’t really tell us.

That right there is some GOOD babbling, yessiree! ?
[Just last night I was out dating the Constitution, and it told me that we have nothing to fear but fear-mongers themselves]

Simply put, there is no way to reconcile Mueller’s findings with the idea that Congress should allow Donald Trump to continue being president. The most generous possible interpretation of the report is that our president is so pathologically narcissistic, he repeatedly undermined investigations into Russian election interference — even though they posed no legal threat to him — because anything that drew attention to the Kremlin’s influence campaign took some of the shine off his 2016 triumph. There is no credible argument for allowing a man who cares more about avoiding narcissistic injury than honoring the independence of federal law enforcement — or protecting the integrity of U.S. elections — to retain the powers of the presidency.

What?  And to think he actually gets paid to assemble paragraphs like this.

The constitution is never outdated. You just don’t like the results and want to change the rules to your liking.

That’s probably closer to the truth.

No wonder leftists want to get rid of the Electoral College…

Let’s be clear.  Trump and the Constitution do not present a threat to America.  Radical left-wing professors who are teaching our kids are the ones who present a clear and present danger to our Democratic Republic.