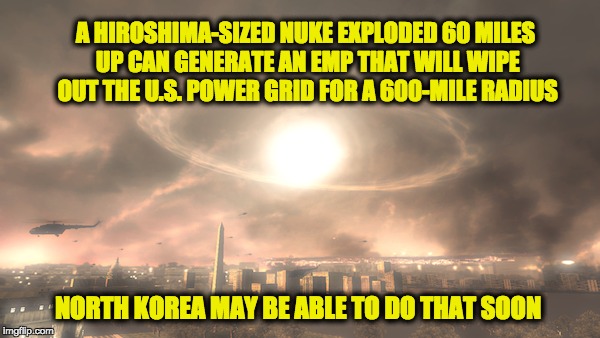 While it seems that everyone is focusing on the North Korean missile tests and their nuclear program (and rightfully so), one expert warned on Sunday that North Korea may be secretly assembling the capability to take out significant parts of the U.S. homeland via an electromagnetic pulse (EMP) attack. Military technology has undergone a massive transformation in the decades since the last World War, and President Trump is keenly aware of this.

North Korea has been feeding the globe a steady diet of threats and provocation for years, with China lurking just over their shoulder in some metaphorically strange form of poor parenting.  With Russia next door, there’s no situation in which a conflict with Kim Jong Un doesn’t end up involving the Kremlin, especially after yesterday’s North Korean missile launch which is estimated to have landed a mere 60 miles south of Russia’s Vladivostok region.

Seven decades removed from the last time the entire world decided to tussle, military technology has grown leaps and bounds.  Not only has the atomic age fully engulfed the globe, but terrifying new age weapons are being developed on the daily.  One such new age advancement are the advent of EMP’s, or Electro Magnetic Pulse weapons capable of nullifying a terrifying range of electronic devices…including entire nation’s power grids.

Given the possibility of such weapons being used by someone such as the despotic Kim Jong Un of North Korea, President Trump has ordered our nation to prepare for just such an attack.

“President Trump ordered the federal government to prepare for a devastating cyber attack against America’s electric grid amid growing fears foreign states are set to carry out attacks aimed at plunging the nation into darkness.

“An assessment of the danger must be carried out by the Energy Department, Homeland Security, DNI and state and local governments to examine the readiness of the United State to manage a shutdown of the power grid. The assessment will also identify gaps and shortcomings in efforts that would be used restore power.”

But the EMP attack doesn’t have to come from the internet. Last week Aaron Klein of Breitbart interviewed Dr. Peter Vincent Pry executive director of the Task Force on National and Homeland Security and chief of staff of the Congressional EMP Commission.

“If you wanted to win a New Korean war,” added Pry, “one of the things you would certainly consider doing is taking out the United States homeland itself.”

Pry surmised the North Koreans may be taking the idea from a Soviet plan during the Cold War to attack the U.S. with an EMP as part of a larger surprise assault aimed at crippling the U.S. military.

“During the Cold War, the Russians had a secret weapon they called a fractional orbital bombardment system,” he explained. “And the idea was to do a surprise EMP attack against the United States by disguising a warhead as a satellite. Because a satellite trajectory is different from an ICBM trajectory that is aiming to go into a city. You know, for accuracy on an ICBM you launch it on a lower energy, 45-degree angle that follows a classic ballistic trajectory. Like a rifle. To land your missile on a city.”

A few days earlier Dr. Pry wrote a column for Newsmax and explained how North Korea could do the deed, and it doesn’t have to be a high yield nuclear weapon nor does it need to be a multi-stage rocket, and the targeting doesn’t have to be that exact.

I am looking at an unclassified U.S. Government chart that shows a 10-kiloton warhead (the power of the Hiroshima A-Bomb) detonated at an altitude of 70 kilometers will generate an EMP field inflicting upset and damage on unprotected electronics. …

On April 30, South Korean officials told The Korea Times and YTN TV that North Korea’s test of a medium-range missile on April 29 was not a failure, as widely reported in the world press, because it was deliberately detonated at 72 kilometers altitude. 72 kilometers is the optimum burst height for a 10-Kt warhead making an EMP attack. …

According to South Korean officials, “It’s believed the explosion was a test to develop a nuclear weapon different from existing ones.” Japan’s Tetsuro Kosaka writes in Nikkei, “Pyongyang could be saying, ‘We could launch an electromagnetic pulse (EMP) attack if things get really ugly.’”

It sounds as if North Korea is a lot closer to disabling the U.S. electric grid then we seem to worry about.  And don’t forget the rogue regime doesn’t have to fire from their own territory. In another breakthrough, North Korea successfully launched last year a missile from a submarine. Only seven other countries have demonstrated the ability to fire missiles from submarines, including Pakistan earlier this year. North Korea has held about a dozen tests of submarine-launched missiles since late 2014, starting with land-based trials of the first part of the process.

Thankfully they still haven’t figured out how to put a nuclear bomb on top of the rocket, but they are working on it.

Given the nation’s proclivity for technology, specifically in the realm of communication, an EMP attack by a foreign power would devastate our citizens’ ability to coordinate defenses against an invading army. Understanding that the might of the United States’ military is unparalleled in the entire world, a preemptive electro magnetic pulse strike would be the only way that a nation such as North Korea could possibly consider themselves a match for America. Therefore, President Trump’s directive is spot on. Hopefully they are already working on preventing the attack in the first place.

Some of this post was originally seen at Constitution.com