Breaking The Tower Of Babel: Why Trump Should Keep Tweeting 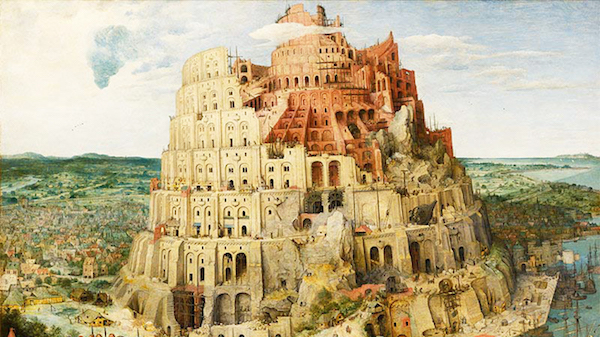 There are things I presume to edit Trump on, such as his omission to date of an outline for understanding U.S. policy in Syria; that is, what U.S. interests and goals are.  Obama never gave us such an outline, and Trump could accomplish more by ponying one up than he apparently thinks.  Even in our compromised condition of national power, shaping everyone’s expectations is still a big power booster, and usually an obviator of at least some need for persuasion by armed force.

I’d like to see Trump using all his voices, and making that strategically useful nod to the conventions of statesmen.

But one thing I won’t criticize Trump for is his tweeting.

I was thinking this over the last couple of weeks, listening to the talking heads wring their hands over Trump’s tweeting habits.  Hey, the theme goes: maybe he’s not the anime villain we thought he was; the man might actually be a certified Homo sapiens – not a pod person from outer space – but.  If he’d just stop TWEETING.  OMG with the tweeting.  He’s killing his presidency.  He’s got to stop.  No mas!  We can’t take it!

Since I don’t have this reaction myself, it’s hard for me to inhabit the mental world it comes from.  Yes, it’s unconventional for the president to communicate tactically by tweeting.  But in the context of everything he’s up against, there is no judicious way to conclude that tweeting, in particular, is harming the effectiveness of the Trump presidency.

What does Trump’s tweeting do?  It mainly serves to (a) refocus the news cycle, and (b) communicate with Trump’s constituents, in an unvarnished, unfiltered way.

These are not bad things.  Trump does have reason and purpose for them, something I’ve written about many times before.  Whether you agree with his purposes or not – and I don’t always – it’s sheer prejudice that keeps you from seeing that he has them, and his tweeting is meant to promote them.

Moreover, tweeting does promote his purposes.  It’s precisely because his tweets disrupt the news cycle that they are useful.  Sure, Trump’s tweets are always surrounded by a sound cloud of embittered, often deranged screeching from the MSM and politicians.  But if Trump communicated his concerns in a more conventional way, you would never know about them.  You’d only know the media version of how wrong Trump is to have evil plans.

All of that, which has been discussed in these pages before, is a prelude to the main thesis of this post.  Which is the following: that Trump’s tweeting is so alarming to the Washington punditry because it cuts deep, through sinew and bone, to literally break up the narrative juggernaut by which the entire modern West now organizes its public life.

That narrative juggernaut has gone a long way toward making itself all-powerful.  It rules by habit and convention now, even where it is built on falsehood, and fully invested in it.  We see that clearly, for example, in the wild absurdity of a special counsel having been inflicted on us for the demented, substanceless “Russia-election” theme-thing.

There is no there there, with this theme-thing; there is no hint of anything prosecutable in whatever the FBI has been “investigating” for a year; it’s a counterintelligence investigation, for crying out loud, something there has never, ever been a special counsel for, nor should there be.  And yet there is a special counsel now, because the narrative juggernaut bayed and howled for one – based on nothing but the self-justifying fact that the bay-ers and howlers are the voices of the narrative juggernaut, to which too many people feel vaguely that some kind of obedience is due.

The real consequences being imposed by an imaginary narrative of “Russian interference” are just one, especially stark example of how the narrative juggernaut exploits its stature in our culture to compel action.  There are many others, starting with all the people finding their lives upended by bureaus and commissions that disapprove of their constitutional rights to speech, religious freedom, and the use of their property.  There has never been a formal repudiation of their rights by the American people, through due process of law – and yet mid-level functionaries in executive departments are suffered to harass and impoverish them, based on the narrative’s version of who supposedly “hates” whom, or what crisis of human-caused environmental disruption is supposedly looming.

We’ve reached the point at which the actual purpose of the U.S. Constitution sounds dangerously radical.  Informally, and by sedulous usage, the narrative juggernaut has become the original framework for all our thought, instead of the cumulative precepts of Judeo-Christian philosophy.  It has become so engrained in the consciousness of our “public mind” that it terrifies our old-consensus pundits when the narrative isn’t obeyed.

Yet look what that narrative produces.  A world in which truth, skepticism, freedom of speech, and even silence are punishable by armies of unelected administrators and predatory media.  In this Orwellian world, all mankind would soon be held at risk and subjugated, through the principle of administrative punishment that prevents people from earning a living if they don’t conform.

The pundits have become the most confused among us: they mistake following the conventions of the narrative for behaving rightly, or constitutionally.  They think the measure of constitutionalism is how well it produces a single, “consensus” narrative – when in fact, the U.S. Constitution is meant to accommodate competition between narratives, and the absence of conclusions about “common” goals.

The Constitution is meant for a people who will be scattered, independent, and explicitly not all pursuing a unified set of approved goals, under one mindset and one narrative.

What came to me recently was that this current development is fascinatingly like what we are told of the “Tower of Babel” in the Genesis 11 story.  In that story, we are told that everyone spoke the same language.  The key verses of the story are as follows:

Now the whole world had one language and a common speech.  As people moved eastward, they found a plain in Shinar [now central Iraq] and settled there.

Then they said, “Come, let us build ourselves a city, with a tower that reaches to the heavens, so that we may make a name for ourselves; otherwise we will be scattered over the face of the whole earth.”  (Genesis 11:1-4, NIV)

Here is the interesting reaction God is said to have had:

But the Lord came down to see the city and the tower the people were building.  The Lord said, “If as one people speaking the same language they have begun to do this, then nothing they plan to do will be impossible for them.  Come, let us go down and confuse their language so they will not understand each other.”

Now, is it reasonable to believe the omniscient God of the Bible thought the ancient Babylonians could actually build a tower that “reached to the heavens”?  Of course not.  Perhaps we can understand what He meant to be this: that a people ruled by one mode of thought and communication could indeed achieve the goal of unification, under an identifying “name” – a desire for pride and power – and not be “scattered over the earth.”

Looking around today, we see a narrative juggernaut that is determined to “unify” us and prevent us from being “scattered.”  The narrative juggernaut literally hates scattering – i.e., cannot abide any lack of control over even the suburbs and adjacent rural areas, much less the thinly populated hinterlands where ranchers and woodsmen live with little reference to the preferences of urban planners.  The narrative juggernaut presumes to be all-knowing about our practical needs, and has 10 or 12 urgent-sounding reasons why it must rule over each of our options.

We, in turn, mustn’t think too hard about what we buy into with our assent to those urgent-sounding reasons.  But we buy into them all the time.  If you let the narrative tell you that emitting carbon dioxide – which you do 24/7 – is the same as polluting a river by dumping toxic chemicals into it, and that the EPA or the UN must have the power to compel you in regard to both, then you have already bought into the narrative that intends to rob you of your intellectual independence, your ability to seek the truth, and perhaps even your life.

Independence of thought amounts to far too much scattering for the narrative juggernaut.  Such independence is always a “hatred” or “phobia,” or perhaps a form of “denial.”

Significantly, definitions like these, and the meanings behind language constructs, become through repetition and usage how we think about things.  They are the basis of what seems logical, obvious, and necessary to us.

Suppose that that understanding of “language” is the primary one in the Tower of Babel story, rather than the more superficial “Japanese versus English” idea (which can still be an integral interpretation).  If we can be induced to all “speak one language,” and if the unity of language is cultivated precisely to enforce a great narrative, it will be increasingly impossible to marshal the human will to assert independence; to speak up for truth, empiricism, or intellectual rights against “consensus”; to scatter.

With the perspective of hindsight, it is surprising how clearly the Babel story mirrors what we see around us today.  Given the connection of the Tower of Babel with the empire of ancient Babylon, it is likely that the story is much shortened in the Biblical account, and actually developed over a period of centuries – which would mirror the development of today’s narrative juggernaut in the West.

The Bible’s purpose is not to recount all human history in the way our eyes would see it, but to tell the story important to God.  It’s illuminating, and something of an antidote to pride, to contemplate that today’s narrative juggernaut in the West – so dauntingly pervasive, spreading throughout the world – could be merely the recurrence of a human pattern from thousands of years ago, told in the span of nine verses.  Technology enables the pattern to encompass much more territory and far more people today, but in principle, it would not otherwise be different.

Genesis 11 says God interrupted the plan of the builders at Babel (which means, intriguingly, “Gate of God,” or the “God-Gate”).  In 2017, the incontinent overreaction of so many to Donald Trump makes it clear that he is assuredly interrupting somebody’s something.  His critics’ inability to contain themselves when it comes to his tweeting habits tells me that interrupting the narrative juggernaut – with those tweets – is one of the most important things Trump is doing.

Trump himself is not speaking a “language” we all need to learn.  That’s the whole point.  It is a perversion of the Judeo-Christian idea to suggest that a temporal governing agent must organize us to all speak a common language, and have a unified viewpoint and goals.  Organizing such unity under a single idea and “language” is the province of God, not man.  (Which is why such enterprises in the temporal realm is invariably undertaken to sell lies.)

To my eyes, the Trump phenomenon looks like a precision-targeted breaking-up agent, knocking the pins out from under a narrative juggernaut that’s been getting perilously close to enslaving us all.

Scattering, on the other hand, should excite us, as the condition of freedom, rights, and nationhood.  Rock on with the tweeting, Mr. President.  Let the break-up accelerate.