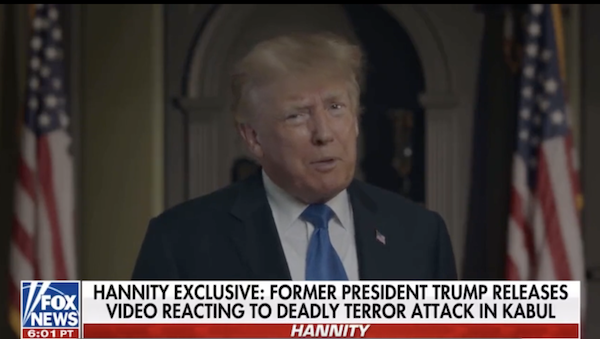 If you want to know what a REAL statesman looks like, compare Joe’s sad response to the bombing in Kabul that killed 13 Americans and more than 100 civilians to the one Donald Trump gave. Trump Kabul bombing reply

The difference is night and day. And all of those obstructionist NeverTrump military generals, foreign policy advisors, and ‘intelligence community’ subversives who played their role in turning public opinion against Trump will have to live with the fact that they helped make this disaster happen.

Joe Biden came out with a speech after the terrorist bombing. The first part sounded more like he was on his psychiatrist’s couch lamenting the soul-crushing loss he felt about Beau’s death than a President addressing the nation before a watching world. He threw in an irrelevant scripture reference so badly that any first-year seminary professor should have flunked (slapped?) him for even thinking it.

He eventually meandered his way back to the topic. He turned to pay lip service to the idea of taking some kind of retributive action against  those responsible. But the performance was so bloodless that even his handlers couldn’t have been able to defend it.

Compare that dumpster fire to the straightforward statement made by Donald J. Trump, who actually seems to understand the need for clarity in a president’s words in such a situation.

You will notice what Trump does NOT do here … unlike Biden, he does NOT make it about his feelings of personal loss.

As one nation, America mourns the loss of our brave and brilliant service members in a savage and barbaric terrorist attack in Afghanistan. These noble American warriors laid down their lives in the line of duty. They sacrificed themselves for the country that they loved, racing against time to rescue their fellow citizens from harm’s way. They died as American heroes and our nation will honor their memory forever.

I want to express my deepest condolences to the families of those we have lost. Today, all Americans grieve alongside you. Together, we also pray that God will heal the other courageous American service members who were wounded in this heinous attack.

Over the past few weeks, I know that many Americans have felt profound sorrow and even pain, watching the events taking place in Afghanistan. And perhaps none more so than the veterans of that 20-year war. Many of them answered the call proudly, and without hesitation after the terrorist attacks of September 11, 2001. Every American who served in Afghanistan has made tremendous sacrifices for our country. On behalf of your fellow citizens, I want you to know those sacrifices were NOT MADE IN VAIN.

We know what you did, we know how brave you were, and we thank you, we salute you and we honor you for all time. I hope that every American will join me in continuing to pray for the safe return of all us citizens and soldiers from Afghanistan in the coming days.

Biden told us he carried a card of the names of people lost in his jacket pocket.

But, after seeing these speeches, which of these two men do you think actually carries them in his heart?