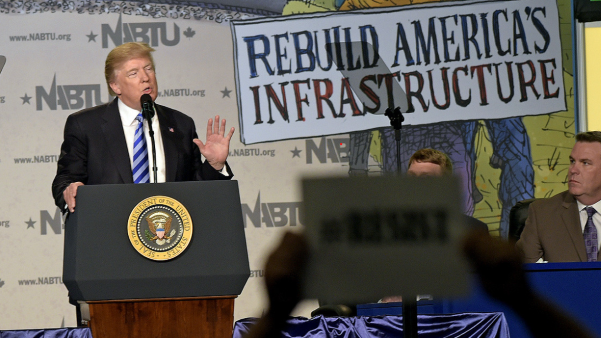 Apparently, the president trying to come up with a Phase 4 relief package. He is looking to create jobs and fulfill a campaign promise with what he calls a “very big and bold” two trillion-dollar infrastructure package. Trump infrastructure phase 4

With interest rates for the United States being at ZERO, this is the time to do our decades long awaited Infrastructure Bill. It should be VERY BIG & BOLD, Two Trillion Dollars, and be focused solely on jobs and rebuilding the once great infrastructure of our Country! Phase 4

Infrastructure was a heavily emphasized issue during Trump’s campaign in 2016 and early presidency, mentioning it at every State of the Union address with the exception of 2020, but the effort has struggled to gain bipartisan traction in Congress.

“We will build new roads, and highways, and bridges, and airports, and tunnels, and railways all across our wonderful nation,” Trump said during his 2017 inaugural address, promising to end the “American carnage.”

Trump told Congress during his State of the Union address last year that infrastructure investments were a “necessity” for the future.

“Both parties should be able to unite for a great rebuilding of America’s crumbling infrastructure,” Trump said during his speech. “I know that Congress is eager to pass an infrastructure bill, and I am eager to work with you on legislation to deliver new and important infrastructure investment.”

“The president said during the campaign — and since — infrastructure was a priority for him. So that’s why we believe that in terms of recovery, that’s probably the most bipartisan path that we can take,” Pelosi said on Monday in a conference call with reporters.

Of course, she also wants to see, “more direct payments” to Americans, more money for state and local governments, increased protections for workers, more assistance for hospitals and nursing homes and “more opportunity for family and medical leave,” free admission to Marvel movies for minorities (at least during the MCU’s phase 4), and a box of chocolate chip cookies delivered to every American on their birthday.

The Queen of mean told the New York Times that a new package could include a rollback of a tax change that affected people in states with high property taxes. You may remember that the tax cut bill included a provision limiting Americans from deducting more than $10,000 a year in state and local taxes from federal tax bills. The rollback would benefit wealthy people in the Democratic Party strongholds of New York and California.

Senate Majority Leader Mitch McConnell was on the Hugh Hewitt Show Tuesday and didn’t seem ready to look at Phase 4. When asked about it by Hewitt, he said:

Well, I think we’ll have to wait and see. Remember, this bill was only signed into law last Friday. So it’s only been law for about four days. And the Speaker is already talking about another bill that, you know, I think you have to genuinely be aware of the Speaker in a situation like this. I’m reminded of what Rahm Emanuel said during the financial crisis – never let a crisis go to waste. What that meant was seize in the crisis to try to achieve unrelated policy items that you have not been able to get under other circumstances. So I would think any kind of bill coming out of the House I would look at like Reagan suggested we look at the Russians – trust, but verify…So let’s see how things are going, and respond accordingly. But let’s not, I’m not going to allow this to be an opportunity for the Democrats to achieve unrelated policy items that they would not otherwise be able to pass.

Trust but verify? Sorry Mitch, but I wouldn’t trust Nancy Pelosi even if what she claims could be verified.