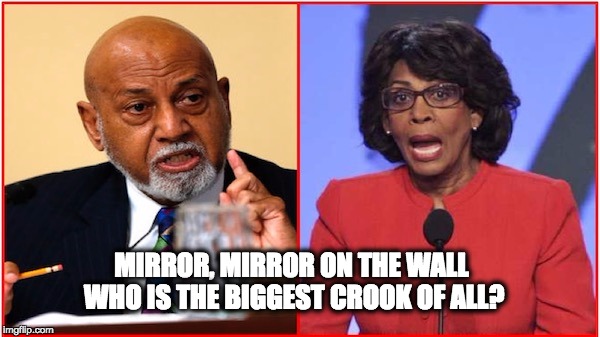 Gotta hand it to Maxine Waters , the California Congresswoman has never met a Republican she didn’t hate, or a corrupt liberal movement she didn’t love, but that doesn’t stop her from spewing her venom in public.  Ms. Waters has been feasting on her hatred of Donald Trump ever since he won the election, saying she would never meet with or work with the new president, and going even further calling for his impeachment.

But it’s not the President trying to get rich off the public dime, it seems that Ms. Waters is trying to compete with colleague Alcee Hastings (D-FL) for the retired Charlie Rangel’s title of the most corrupt person in the House of Representatives.

The Washington Free Beacon is reporting that Karen Waters has been paid over $600K by her mother since 2006, the bulk of that money coming from campaign dollars.

In 2010 Waters was accused of helping an unsound bank (OneUnited) receive government aid to help her husband who was an officer and stock-owner of the bank. She avoided any problems by throwing her grandson under the bus.

The evidence against Ms Waters includes series of emails from Waters’ Grandson and Chief of Staff, Mikael Moore and members of the House Financial Services Committee:

In the end Maxine Waters avoided the ethics charges by getting her Grandson and Chief of Staff, Mikael Moore to take the fall.  Grandchild Moore got off with a “letter of reproval.” Waters got off despite the fact that she requested the bank bailout money for  a bank where her husband owned stock and had served on the board of directors.” At the time she requested the help, Waters neglected to tell Treasury officials about her financial ties to OneUnited Bank. I bet her grandson got a nice gift for Christmas that year.

Right now her colleague Rep Hastings has the jump on her for the most corrupt title. Near the end of March Constitution.com  reported that Alcee Hastings (D-FL) had become embroiled in a corruption scandal that saw him paying his girlfriend over $2.5 Million over the last 20 years.

In Hastings case, this isn’t the first branch of the federal government he “served.” Before he was in Congress, Hastings was a federal judge. But in 1988, the Democratic-controlled U.S. House of Representatives impeached Hastings for bribery and perjury in a close vote of 413-3. In 1989 was convicted by the U.S. Senate and removed from office.

On the other hand, Waters also has some other corruption “creds”.  She was tabbed by government watchdogs as “one of the most corrupt” politicians in Congress. (See here and here.)

Waters-Hastings, Hastings-Waters…one could make a case for either of them.  One thing is for sure…perhaps Maxine Waters should worry about her own scandals before she tries to make up some about President Trump