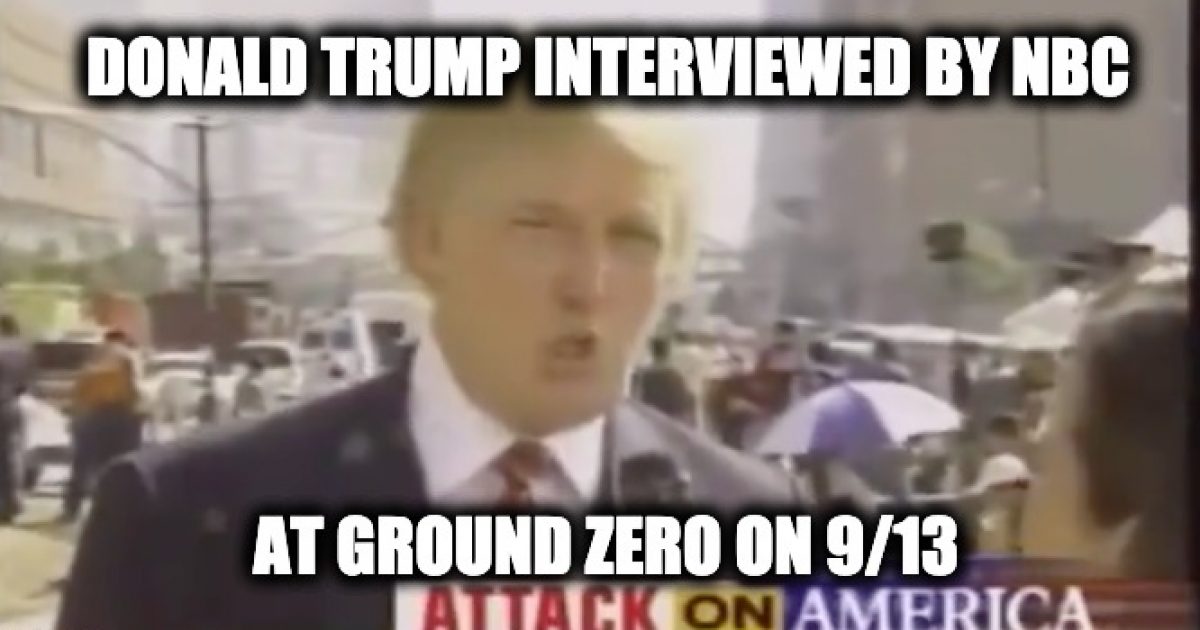 CNN and MSNBC disputed the President’s claims about his presence at ground zero in the aftermath of 9/11. Both networks were lying.

MSNBC’s Kyle Griffin insisted the future president Trump has no proof that he was in New York on that terrible day of September 11, 2001.

Did he ask the Press Secretary for evidence Trump was there?  I was in Manhattan that day but was too scared to take selfies, will Kyle Griffin call me a liar also?

CNN’s Chris Cillizza also jumped to his Twitter account to lie. Cillizza acknowledged Trump was in NYC, but several miles from ground zero, and that his claim wasn’t true.

“Everyone who helped clear the rubble — and I was there, and I watched, and I helped a little bit — but I want to tell you: Those people were amazing,”  He has also claimed that he helped pay for several hundred workers to help clean up the wreckage in the aftermath of 9/11. Independent fact-check sites have been unable to verify that claim.

I wonder if Cillizza has ever been to Manhattan? It is true Trump Tower is about four miles from ground zero. But from the penthouse of the 58-story Trump Tower building, one can see much of Manhattan, Queens, and parts of New Jersey.
Cillizza claimed that Trump was lying even worse what he lied in front of the 9/11 first responders. Would the CNN reporter suggest that the President’s statement as bad a Jim Acosta accepting a journalism award in front of real reporters?  Of course, there’s a big difference— the president wasn’t lying about ground zero, but Acosta was lying about being a real journalist.
The  Daily Caller’s Eddie Zipperer noted, NBC interviewed Trump on the streets of the Big Apple 48 hours after the attacks.

Hey, check out this great video of NBC News finding out from President Trump what the aftermath is like since he was there pic.twitter.com/1ci1ISDOLo

A reminder here: if Trump was away from the city on the day of the attack, it isn’t likely he would have been able to get back there in only 48 hours. Remember that air traffic was completely shut down at the time as officials investigated the attacks.

Trump was also interviewed by German TV near ground zero on the same day that NBC caught up to him at the site of the attack.

You can see he is wearing the same clothing that he wore in the NBC interview.

Bernard Kerik, who was NYC Police Commissioner in 2001, also affirmed that Trump was at Ground Zero to encourage the police, firefighters, and other first responders working to make sense of the rubble created by the terror attack.

Kerik replied to a lying CNN story about the incident and called CNN “fake news.”

Kerik added, “President Donald Trump was in fact at Ground Zero many times, supporting, motivating, and inspiring first responders, no different than Mariah Carey, Arnold Schwarzenegger, and dozens of other celebrities and sports figures that were there in support of the troops. @CNN lies.”

President @realDonaldTrump was in fact at Ground Zero many times, supporting, motivating, and inspiring first responders, no different than Mariah Carey, Arnold Schwarzenegger, and dozens of other celebrities and sports figures that were there in support of the troops. @CNN lies. https://t.co/M6rcdgK4u9

Whattaya know there is proof the President was truthful, and that both MSNBC’s Kyle Griffin and CNN’s Chris Cillizza lied.