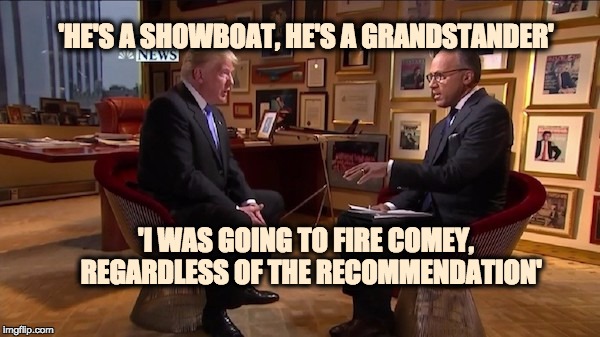 Facebook Twitter Flipboard
President Trump told NBC’s Lester Holt that he was going to fire James Comey no matter what AG Sessions and Deputy AG Rosenstein recommended because he was a showboat.  No wonder why Chuck Schumer is so riled about the firing.  After all they are birds of a feather, the party leader who supposedly represents New York State,  is arguably the biggest showboat in Congress.
“I was going to fire Comey,” Trump told NBC News’ Lester Holt in an interview. “Regardless of the recommendation I was going to fire Comey….Look, he’s a showboat, he’s a grandstander, the FBI has been in turmoil. You know that, I know that. Everybody knows that. You take a look at the FBI a year ago, it was in virtual turmoil, less than a year ago — it hasn’t recovered from that,”
But if that is the case, why did the White House press office say it was because he screwed up the handling of the Clinton Case, and the recommendation of Deputy AG Ron Rosenstein. I would love to know who came up with the fake excuse.

Apparently, there are FBI agents who agree with the President’s evaluation of Comey.  Kerry Picket reported in the Daily Caller:

Comments made by three FBI special agents that were given to the Daily Caller in reaction to the White House’s dismissal of McCabe Tuesday night included, “good riddance” and that the firing was “overdue.

All of the agents concurred that other agents in their immediate work environments are “talking about” Comey’s firing and most appeared unconcerned about his departure.

“We don’t need a political hack,” an agent within the Joint Terrorism Task Force said.

Another agent said, “It should have been expected because he was not doing a good job. He had it coming to him.”

Trump also told Lester Holt  he didn’t want the FBI to “lay off” the investigation of Russian involvement and possible involvement of his campaign.

Asked by Holt if by firing Comey he was trying to send a “lay off” message to his successor, Trump said, “I’m not.”

“If Russia did anything, I want to know that,” he said.

But Trump also insisted there was no “collusion between me and my campaign and the Russians.”

“Also, the Russians did not affect the vote,” he said.

Trump also described the times Comey told him he was under investigation:

“I actually asked him” if I were under investigation, Trump said, noting that he spoke with Comey once over dinner and twice by phone.